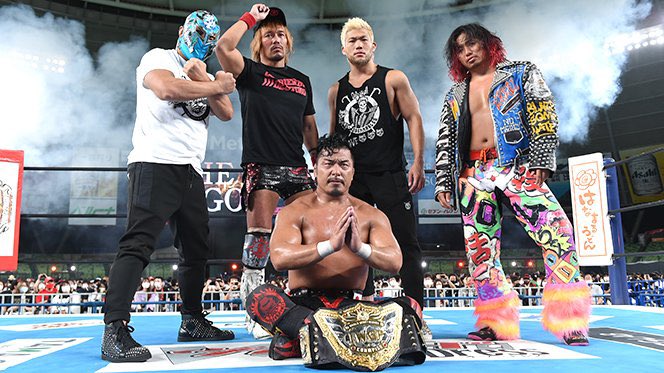 Day 2 is here and NJPW continued their PPV inside Metlife Dome, Wrestle Grand Slam. This show is filled with another anticipated banger of a match. The Dragon is going to fire his breath to the darkness that comes upon him. Robbie Eagles also going to stay away from the Time Bomb when he defends his Jr Title against Hiromu. A massive three-way between top teams in NJPW. Are you ready for Day 2? let’s get through it!!

GOOD: Wrestle Grand Slam started with a massive tag team bout between CHAOS (Kazuchika Okada & Tomoshiro Ishii) vs United Empire (Great O’Khan & Jeff Cobb). This bout went really well with hard-hitting strikes and really good chemistry from both teams. Generally, I like this bout, owing to the outstanding sequences between Cobb and Ishii. After yesterday, the sequences between Okada and Cobb didn’t appear to be particularly good. Cobb, as usual, demonstrated his strength. He also gave Okada a hard belly to back on the floor, injuring both men. I was genuinely astonished by the outcome. It’s not often that Ishii is pinned, particularly by Great O Khan.

GOOD: Up next is the first title match of the night, Bullet Club’s cutest tag team faced Suzuki Gun for the IWGP Jr Tag Team Titles. They were able to tell a heel vs. heel plot that was never overbooked, with both teams cheating. This was not quite as horrible as I had anticipated. There’s a common thread that runs across all of the contests for this title. Wrestling on a similar level, which, to be honest, isn’t up to par. Obviously, El Phantasmo’s boot story was the finest part of the fight. I was getting excited because I thought we’d finally figure out what was in there. Surprisingly, Phantasmo’s foot was unharmed, and when Desperado used that boot to beat him, he began twitching in pain. The rest of the fight didn’t even try to claim to be a classic in global history, and it just fell flat.

MUST WATCH: Dangerous Tekkers face their dangerous challenge in their Tag Titles reign when they defended their tag team titles against LIJ & CHAOS. I genuinely enjoyed this match, even though I wasn’t a fan of the three-way stipulation and thought they could have used it better. However, I continued to believe that everyone had some beautiful sequences with each other and that everyone could demonstrate something cool. SANADA’s Skull End over YOSHI-HASHI at the end was obviously rather spectacular, but I was expecting YOSHI-HASHI to tap. In general, the last minutes were terrific; it took a while to get to the good bits, but once we did, it turned out to be a really enjoyable match.

MUST WATCH: Robbie Eagles is up next when he tried to defuse the impactful Time Bomb, Hiromu Takahashi. Another entertaining encounter, in which both players went for the other’s leg and did some excellent work on it, as well as selling well. It was a little hard-hitting in the middle, with some cool attacks and lariats, but notably following Hiromu’s fantastic sunset bomb to the outside. After that point, the match picked up, although it also felt weird after Hiromu attempted the Time Bomb 2, which I presume was due to the length. It was amazing to see Robbie take the win; it was unexpected, but it was still nice to witness. Despy being the next challenger makes me a little nervous. it feels like NJPW doesn’t really have many juniors with Despy being in the title picture every time.

AVERAGE: It’s time for the main event!!! Shingo Talagi defended his title against the King of Darkness, EVIL. This was an unusual match. The first 15 minutes were filled with Bullet Club foolishness, but Shingo delivered swift retribution, which the audience adored. The crowd erupted in applause every time Shingo gained the upper hand, and they were especially enthralled with the Time Keepers spot and the dismissal. Then there was around an 8-minute period of serious grappling until Bullet Club reappeared. But, once again, Shingo got his comeuppance when Los Ingobernables de Japon rushed out and defeated Bullet Club, allowing him to retain his title cleanly. The crowd applauded as Shingo cut a wonderful promo with all of Los Ingobernables de Japon surrounding him. what a strange battle, but better than expected, and the crowds loved it.

Wrestle Grand Slam Day 2 is what we need on Day 1, just a really good undercard and a lot of unexpected outcomes. However, even though the crowds were a bit louder today, being not able to cheer still ruined the show for me. The main event in this show was also bad and full of nonsense interferences. The introduction of G1 31 was, of course, a source of delight for the entire community. I’m pleased with it, despite the fact that there are no surprises in the blocks. The event wasn’t as difficult to see as yesterday’s, mainly because it was held earlier in the day, and it doesn’t feel as difficult when you’re already exhausted.