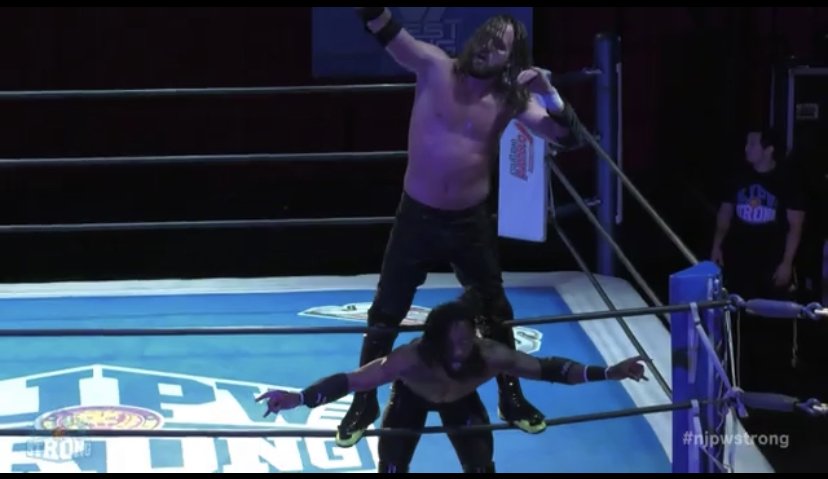 Overall, this was a good episode of Strong nothing out the ordinary. I’ve been enjoying the Mutiny Tour and glad this was the last one but now next week we will see some Matches from Philadelphia tapings and I’m excited to watch those!

Preview: Hello! Welcome to another episode of NJPW Strong! More Tapings from Mutiny. This week we have some Bullet Club tag action as well as an international battle between Big Damo and Tomohiro Ishii!

GOOD Lucas Riley and Kevin Blackwood Vs Yuya Uemura and Keita: Match would start with Yuya and Kevin having a nice back and forth hitting some good holds and fast locks as the crowd was getting into it. Both men would tag in their partners, and they would have a nice back and forth as well before Keita would drive Riley onto his back with a stiff Backbreaker. Keita would go for a Hurricanrana but Kevin would slide in and hit a nice Dropkick onto him. The team of Blackwood and Riley would keep the pressure on Keita hitting good double teams with quick tags as well as a nice German Suplex. Keita would fight back and hit a nice double move one face breaker then a good Dropkick from the ground position. Yuya would get tagged in and have a MASSIVE Hot tag. The crowd has been into this match since the opening bell and are reaching an all-time high. Yuya would hit a few good moves then a Back suplex. Riley would come in and break the pin before him and Kevin would hit a nice double team. They would look to do the same to Keita but him and Yuya would instead work together and hit a nice double team. Keita and Blackwood would have a awesome sequence before Riley would hit a series of moves himself picking up the speed before Yuya would hit a monster Frankensteiner to get the victory!

GOOD El Phantasmo and Chris Bey Vs Christopher Daniels and Alex Zayne: Chris Bey and Alex Zayne would start the match having a quick sequence before Alex would hit a twisting Senton. Alex would tag in Chris who keeps the pressure on Chris. Chris would tag in ELP but it wouldn’t make a difference as Daniels would keep the pressure on both men hitting a nice head scissors takeover. Chris would continue before going for more offense hitting the ropes but Chris would pull him to the outside then hit a forearm. Back in the ring ELP And Bey would hit a cool double team. As the match continues Bullet club would keep the pressure on Christopher Daniels hitting amazing things team moves. Chris would finally get a advantage and tag in Alex who starts his hot tag taking out ELP with some hits and a clothesline before hitting a Front flip leg drop on ELP. Before using Chris Bey back and hits a Frankensteiner off the middle rope onto ELP. Chris and Bey would have a back and forth before Chris hits a clothesline taking them both over. Alex Zayne back in the ring would go for a move but miss ELP would then hit Cr2 before winning with a Sudden Death Superkick for the win.

GOOD Big Damo Vs Tomohiro Ishii: Match would start with both men locking up Damo throwing Ishii across the ring. As they would lock up again Damo would continue show his strength in not only that but in some shoulder tackles and strikes. Damo would show his strength throughout hitting small movements but big effects. Damo would keep using his strength throwing Ishii to the ropes hard and hitting him with some punches and stomps.Ishii would finally get a small advantage hitting a clothesline in the corner before hitting a nice forearm chop connection combo taking Damo down slowly. Ishii would try and go for more offense, but Damo would be too big hitting a crossbody. Back to the feet Both men would exchange chops before Damo would hit a pump kick. Damo would put Ishii on the top rope and hit a nice superplex Ishii would not sell it and get up before hitting a suplex of his own. Damo would get the advantage back before hitting a huge Dropkick then a Uranage then a Nice Hilo over the top rope. Damo would hit a nice fireman Carry slam then a senton before going for a middle rope splash Ishii would move out the way. Ishii would hit a German Suplex. Damo would hit some shots, but Ishii would react with a huge Headbutt before two clotheslines one rocking him then another knocking him on his back. Ishii would keep the momentum by nailing an enziguri then a basement lariat before lifting Damo up and hitting the Brain Buster for the victory!

Overall, this was a good episode of Strong nothing out the ordinary. I’ve been enjoying the Mutiny Tour and glad this was the last one but now next week we will see some Matches from Philadelphia tapings and I’m excited to watch those!

For inquiries about the rating criteria check out the article announcing the new system here:https://wrestlingrepublic.com/wrestling-republic-are-proud-to-announce-our-new-ratings-system/