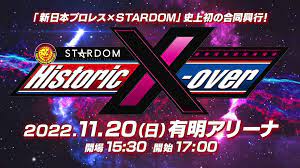 NJPW & Stardom have announced a tournament to crown the first ever IWGP Women’s Champion.

The Japanese wrestling scene exploded when the IWGP Women’s Championship was created and sent shockwaves through Joshi Wrestling and wrestling as a whole. We have been wondering on how the first inaugural champion would be crowned, then the answer was finally announced during last night’s (as of writing) press conference regarding Historic X Over

Chairman Sugabayashi and Stardom president Hiroshi Ogawa announced that the first ever champion for the IWGP Women’s Champion would be crowned with a tournament with the first-round matchup being held in London for day 2 of Royal Quest II with a bracket including international talent. The other side of the bracket will be held in Tachigawa with Stardom talent. The winners of the brackets will face off at Ariake Arena to crown the first ever IWGP Women’s Champion. The wrestlers scheduled for the tournament are still yet to be announced but a few matches for Historic X Over has been confirmed at the press conference.

Currently, this is all the information New Japan and Stardom announced but a very promising card is to be expected along with the 3 matches confirmed. Historic X Over will be available to watch via Pay Per View on November 20