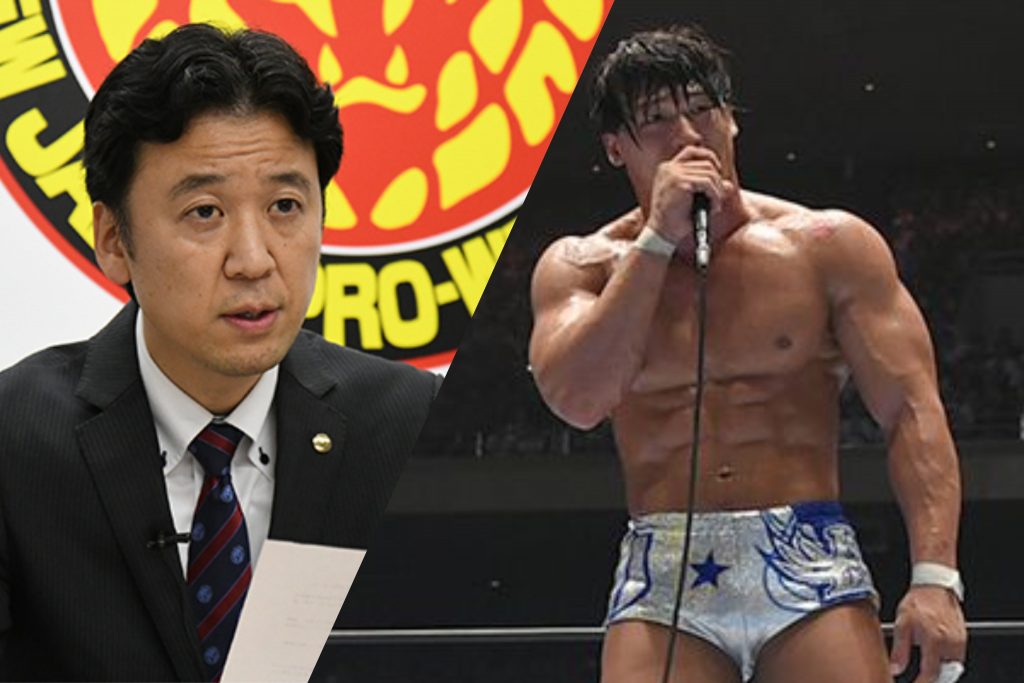 NJPW’s President has issued a statement revealing the issues between NJPW and Kota Ibushi have been resolved, with both sides issuing an apology. This comes after recent allegations Kota Ibushi has made against the promotion.

Over the past month, Kota Ibushi has released numerous tweets slamming NJPW, claiming he had faced sexual and power harassment from the management team.

Ibushi also threatened to expose ‘more dark secrets’ from behind the scenes in NJPW.

This came after Ibushi allegedly broke his contract by appearing on another wrestling show in Japan, without the permission of NJPW.

During the fall out between Ibushi and NJPW, Ibushi’s mother attempted suicide. Thankfully she survived the incident, but broke her hip in the process.

The fall out received a mixed reaction from fans within Japan, with some slamming NJPW for their alleged reaction to the situation, while others agreed Kota Ibushi was in violation of his contract.

NJPW had stayed silent on the situation without issuing any public statement, until today.

After the conference, NJPW released the full transcript, which you can read below:

Today, on behalf of New Japan Pro-Wrestling I would like to address recent claims made by Kota Ibushi.

Starting May 10, Kota Ibushi began releasing statements critical of certain members of NJPW staff on Twitter. Firstly I would like to deeply apologise for the concern these comments caused amongst fans and personnel.

The statements posted on Twitter included screenshots of a text conversation with a member of staff (henceforth “Official”) that included a threat that Ibushi’s contract would be terminated. On investigation, we ascertained from the individual concerned that these screenshots were indeed genuine. I would now like to take a moment to explain the series of events that led up to the aforementioned posts to the extent of our current understanding.

Kota Ibushi is a wrestler exclusively contracted to New Japan Pro-Wrestling. As such, it is understood that in order to devote full attention to NJPW matches and associated events, he is required to inform, and receive express permission from NJPW before outside appearances.

On March 4, in breach of the terms of his contract, Mr. Ibushi made an appearance seconding wrestlers at a Just Tap Out event. The aforementioned Official is responsible for contacting various wrestlers contracted to New Japan Pro-Wrestling, but also has a long personal history with Mr. Ibushi that extends far before him becoming an exclusively contracted talent.

The Official contacted Mr. Ibushi in the belief that Mr, Ibushi’s actions in breach of his contract were taken deliberately to persuade NJPW to terminate its agreement with him. Perceiving this as a betrayal of personal trust established over a number of years, his messages were sent in an emotional state as a result.

When I myself learned of Mr. Ibushi’s appearance in a different promotion, I requested a full status report from the Official. Therefore it is possible that the official’s contact with Mr. Ibushi also involved a desire to find out the exact particulars of the situation to relay to myself. In relaying this report, the Official told me that he thought Mr. Ibushi wanted to leave NJPW.

Not wanting to lose the services of Kota Ibushi in such a manner, and wanting to find out his true mental state and opinions on this matter. I arranged a meeting with Mr. Ibushi at his personal training facility on March 31.

In my brief meeting with Mr. Ibushi, we chatted while we conducted some light exercise. As we moved on the mat, and participated in some jump training. I was amazed at his super human physical abilities, yet Ibushi confided that he found recovery from his 2021 shoulder injury was taking longer than he had expected, and that his range of motion was far from ideal.

After our conversation, Mr. Ibushi took me by car to a restaurant where we continued our conversation. Our conversation was amicable. Mr. Ibushi explained to me that he had been invited to Just Tap Out by its manager TAKA Michinoku. He also explained that while he was in the dressing rooms, he made an impulsive decision on his own accord to head to ringside and second the wrestlers.

After receiving Mr. Ibushi’s explanation, I reprimanded him, reminding him that this was a breach of his contract with New Japan Pro-Wrestling, as well as a breach of licensing agreements we hold with other companies. Mr. Ibushi sincerely apologised for his actions. Mr. Ibushi’s penalty for his breach was limited to a reprimand as, on hearing with Mr. Ibushi, it was clear there was no intention to breach the terms of his contract, nor did he believe a breach had taken place because he had not participated in a match.

At the point of our meeting, I did not know the exact wording or particulars of Mr. Ibushi’s text conversation with the Official and as a result, did not offer a proper apology for the content of the conversation.

Several weeks later, on May 10, screenshots of the conversation on the LINE service were made public. I have since learned that those tweets were made when Mr. Ibushi was acting in a state of concern for his mother, with mental distress being caused by this situation. Mr. Ibushi told me that after discussing the details of his situation with his mother on May 8, she attempted suicide on May 9 and suffered a broken bone in her back as a result.

After the first series of Mr. Ibushi’s tweets were posted, a meeting was held on May 10 including our company’s legal staff in order to understand the particulars of the situation, and to determine the best possible course of action for both New Japan Pro-Wrestling and Mr. Ibushi. We determined that said best course of action would be to directly meet with Mr. Ibushi, to formally apologise and hear one another’s opinions before making a public announcement should one be deemed necessary.

As a result, there has been no formal announcement from the company on this matter until this time. However yesterday, myself and the company owner Mr. Takaaki Kidani were able to meet with Mr. Ibushi, and discuss this statement to you here as well as our opinions on the matter. Before proceeding I would like once again to sincerely apologise to fans for the concern caused by this series of events.

I would now like to relay the company’s stance on this situation.

Mr. Ibushi’s actions in attending an outside event without proper procedure. As well as publicly disclosing internal affairs were actions in breach of his contract. After consideration of the particulars I previously mentioned, an appropriate penalty for Mr. Ibushi will be determined.

However, the words of the Official in his text conversation were inexcusable. Especially in their direction to a wrestler who risks his life in order to fulfil his role as a professional. It is this mindset that directly led to Mr. Ibushi posting his critical tweets about the company. For the thoughtless content of these messages, we fully and unreservedly apologise to Mr. Ibushi.

Despite the Official’s lengthy relationship with Mr. Ibushi, the lack of consideration shown to him and by extension our wrestlers at large should also be met with an appropriate penalty.

Kota Ibushi is, and will remain a key member of the New Japan Pro-Wrestling roster. This kind of severe disagreement between company and talent should not happen again; in order to prevent any such instances in the future, and ensure the best possible working environment for talent, we will be actively engaged in discussion with Mr. Ibushi about improving company policy and implementing proper procedure.

We again would like to apologise to fans, wrestlers and personnel for the concern and the disruption caused in the middle of the Best of the Super Jr. tour. (Statement via NJPW 1972.Com)