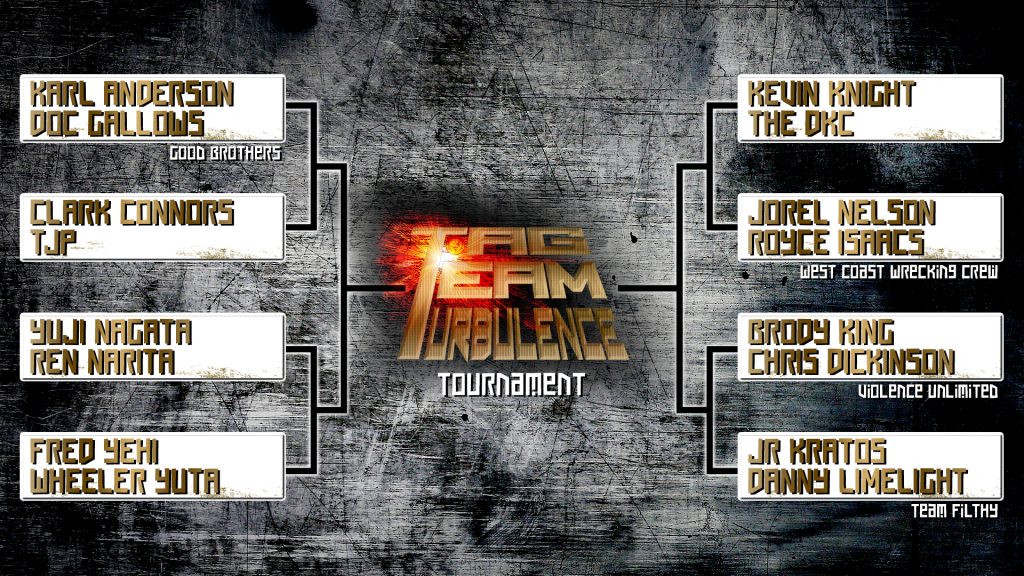 During today’s New Japan Strong Ignition episode. New Japan announced the new Tag Team Turbulence tournament that will take place in July in New Japan Strong. This will be a single elimination tag tournament. We will also see a return of 2 Bullet Club OGs.

Now on the opposite corner of the STRONG boys. We have Karl “The Machine Gun” Anderson and Doc Gallows. I think we have all been waiting for these BC OGs to come back on the cerulean blue mat for a long time. Since their heartbreaking departure from New Japan along with fellow Biz Cliz buddy AJ Styles, the former IWGP Tag champs have been in WWE from 2016 to 2020 and made their Impactful debut on Impact’s Slammiversary. They then became Impact World Tag Team Champions and reunited with their fellow Bullet Club members, The Elite. They have gotten tag gold from all the promotion they worked for. I believe that this won’t be a TOO SWEET ride for Connors and TJP.

Our next tag team is the LA DOJO boys, The DKC and Kevin Knight. I believe two have the power and strength to dominate the Tag Team Turbulence. From past strong episodes, I believe that these two are gonna be a great team.

Next we have The Blue Justice Yuji Nagata and New Japan Noge Dojo Young Lion, Ren Narita. Both coming from the New Japan Noge Dojo, they have once teamed together recently on New Japan Strong when they faced Moxley and Dickinson. Nagata, a Japanese legend came back to competing on US soil last month when he faced Jon Moxley for the IWGP US Title on Dynamite and a week before on Strong. He failed to be the first Japanese IWGP US Title holder but never gave up on the US. I think that his white eye Nagata lock will get him and Narita the victory. Meanwhile, Narita still a Young Lion, He has the strict training of the Noge Dojo and the hardcore determination that he got from Shibata and the LA Dojo.This pupil mentor tag will lock themselves in for the win and possibly tag gold.

In front of Nagata and Narita, Fred Yehi and Wheeler Yuta. Since making their debut on Road to Ignition, all eyes were on Yehi and Yuta and their amazing work got them a block in this single elimination tournament. I think that they are okay but we don’t know what the future holds.

Now “The Dirty Daddy” Chris Dickinson teams with his ROH partner Brody King by the name Violence Unlimited. This will be a revenge match for Dickinson for Team Filthy. About last month, Team Filthy has kicked out Dickinson from the faction. Then Dickinson has challenged Tom Lawlor for his Strong Open-weight Championship but failed to capture the gold. But during the match, when JR Kratos and Danny Limelight was going to hop on the apron, Brody King saved Dickinson from Kratos and Limelight. Now they unite. This will be a comeback for Dickinson if he wins the Tag Team Turbulence.

Now the opposite corner, we have Team Filthy, JR Kratos and Danny Limelight. After kicking out The Dirty Daddy with a low blow, Team Filthy had a great run in Strong. After a strong defense of the Strong Openweight Championship by Tom Lawlor, Team Filthy has been on a roll. Now it’s time to get filthy in the Tag Team Turbulence. The future lies ahead for Team Filthy. If Japan opens up to Strong wrestlers, things just might get filthy. Will Dickinson get his revenge or will Team Filthy stand tall?

That was the teams for the Tag Team Turbulence Tournament. What team is your pick? We can’t wait for the return of Gallows and Anderson! Who will win?