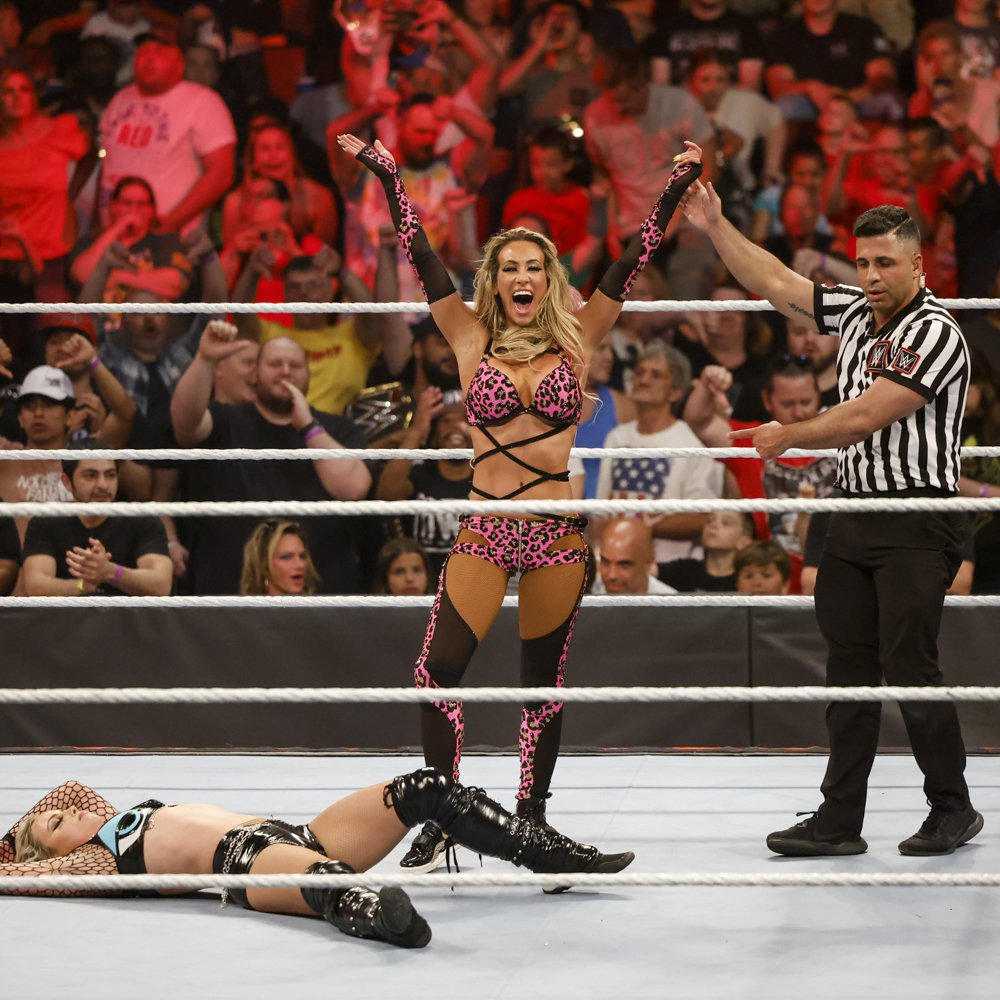 We have another Monday Night Raw on tap tonight on the road to Money in The Bank. Elias is set to make his return to WWE and we’ll see if he ends up in the same room with Ezekiel at the same time. Asuka takes on Becky Lynch in a MITB qualifying match and there is also a 5 way women’s match to determine the number 1 contender for the Raw Women’s Title held by Bianca Belair.

GOOD Bianca Belair Promo: Bianca gives us the traditional, “Welcome to Monday Night Raw,” and follows with the big news. Which of course, is that Rhea Ripley is injured and will not be cleared to compete against Belair at MITB. That being said, the newest number one contender will be determined tonight in a huge 5 way number 1 contenders match tonight! Before Bianca can finish her thought Becky Lynch interupts and then she’s interupted by Asuka, and we may have an interruption train on our hands. Here comes Liv Morgan, and I’m gonna take a wild guess that Carmella is on deck. Sure as could be, here she comes. Carmella goes right after Liv Morgan for being the only non former champion and this is starting to make more sense. Liv responds with an excellent jab of her own. Right when Carmella tries to respond Alexa Bliss makes the interruption and delivers on the microphone. This match is up next.

GOOD Alexa Bliss vs. Asuka vs. Liv Morgan vs. Carmella vs. Becky Lynch: After a hot start that sees Alexa Bliss and Liv Morgan use their alliance to clear the ring, the two friends shake hands and lock up. They have a really incredible back and forth that is worth looking at if you missed this match. Shortly thereafter the other three competitors rejoin the match. While all 5 women have played a role in the match, Liv Morgan and Alexa Bliss have put in by far the most work at the halfway point. There is a really creative spot between Carmella and Becky Lynch, where Mella launches Lynch onto Liv Morgan off the top rop that nearly scores her the victory. The pace quickens and Becky Lynch is nearly stuck in the Asuka Lock but she’s able to evade due to the hectic nature of the match. After everyone hits each other with big moves, Carmella smashes Liv Morgan with a superkick and she is the new number one contender! What a wild match that was, and it was shockingly entertaining to boot.

Result: Carmella by Pinfall via Superkick

Vince McMahon in ring promo: Mr. McMahon makes his entrance to a massive reception. He thanks the fans for Raw being the longest running episodic television show in history. He announces John Cena’s return for next week, and once again finishes the segment by throwing the microphone. Too short to rate.

GREAT Riddle Promo: Riddle has reasonably recovered from his showdown with Roman Reigns, he was so close to gaining redemption in honor of his best friend Randy Orton. His ribs hurt but he’s not backing down from Roman Reigns, he may not be able to challenge him just yet, but what he can do is win Money in The Bank. He calls out Seth Rollins for doing his, “Bro Cody Rhodes, dirty,” before he’s interrupted by MVP and Omos. The Giant and Riddle will face off in an MITB Qualifying match up next.

GOOD Riddle vs. Omos Money in The Bank Qualifying match: The ribs are taped for Riddle but he’s all over Omos out of the gates. A side slam halts his momentum and then Omos takes over. Seth Rollins is watching keenly from backstage as Omos continues to target Riddle’s injured ribs. After a huge flurry from Riddle, Omos is still on his feet and he intercepts an RKO attempt to hit Riddle with a double chokeslam. Omos has qualified for MITB. After the match Seth Rollins comes out and picks up the pieces that are left of Riddle.

GREAT Seth Rollins promo: Rollins trashes Riddle for how many losses he’s taken of late. Seth is excellent on the microphone as always and this was another really exciting segment. He addresses Roman Reigns next and then speaks about the MITB match. He’s just about to finish his promo when Riddle jumps back in the ring, but Rollins is ready and delivers a Stomp to end the segment.

ABOVE AVERAGETheory Promo: Theory is wearing an earpiece as he enters and we have another pose down unfortunately. He calls out John Cena by using his signature, “My Time is Now,” line. Theory talks about how he didn’t get to show his poses this week. He oils up and then does his poses. Lashley is behind him in the ring and he thinks the crowd is cheering for him, but they’re not. Theory tries to take a selfie and that is when he sees Bobby Lashley behind him. Theory gets the baby oil to the eyes and then is speared into oblivion by Bobby Lashley.

GOOD Angelo Dawkins vs. Jey Uso: After a brief promo from the Uso’s, the Street Profits interrupt. With their match at MITB coming up we will get a preview tonight with a one on one match between Main Event Jey Uso and Angelo Dawkins. The action spills to the outside quickly and Jey Uso has the early advantage. Dawkins fights back into the match and then is caught with a superkick. Jey tries to follow with an Uso Splash but is caught by Dawkins in mid air and spiked with a spinebuster.

GREAT Elias Concert: Elias is joined by Ezekiel backstage and the crowd is going wild. This back and forth is incredible. The crowd loves this, and you can hear them while they play the segment over the big screen. Elias is in the ring to play a song and he is very quickly interrupted by Kevin Owens. He calls Elias a liar and claims now that Elias is Ezekiel. Kevin Owens is completely bewildered and Elias makes fun of him with his music. Elias hammers KO over the head with a guitar to end the segment and then he thanks the crowd. Backstage Owens runs into an interview and he is still entirely unconvinced that Ezekiel and Elias are not the same person. He challenges Ezekiel for next week and Zeke gladly accepts.

ABOVE AVERAGEGauntlet match for US Title opportunity Bobby Lashley vs 3 Random Opponents: The first of the 3 opponents will be Gable, but he’s accompanied by Otis as well. Lashley is dominant early on Gable and he’s eventually able to dispose of him with a violent edition of the Hurt Lock. Otis is immediately into the ring as the second competitor and he is all over Lashley. He dominates Lashley for a good amount of time but in the end he succumbs to a Spear from The Almighty, but not really because Gable jumps in to cause a disqualification before the count is made. They continue the assault and then we find out who the third competitor is. It’s Theory himself of course. He wipes the baby oil out of his eyes and then runs down to the ring to assault Lashley. The Almighty is badly compromised but he’s not done yet. Lashley is able to reverse the A-Town for a cradle and he now has an opportunity for Theory’s United States Championship at Money in The Bank.

Miz Tv with AJ Styles: Styles gets a huge reception following his appearance on Impact’s show last night. Miz immediately puts AJ Styles on the spot for his recent pitfalls. Styles isn’t having it and he’s not going to take this from The MIz. The match that will follow this segment is AJ Styles vs. Ciampa. Too short to rate.

GOOD AJ Styles vs. Ciampa: Styles starts the match furiously with right hands and then a clothesline. Miz joins commentary to plug the newest episode of the reality show that he is on immediately following this program. Ciampa regains some momentum in the match and takes over for a good while. AJ Styles makes a comeback and then hits a Phenomenal Forearm to pick up the victory. Miz tries to attack Styles after the match but he is caught with a right hand and then a Styles Clash.

GREAT Asuka vs. Becky Lynch Money in The Bank Qualifying match: Asuka does not wait for the match to start to begin the fight and she nearly locks up an armbar immediately once the bell rings. Becky Lynch and Asuka have wrestled plenty of times but they are always entertaining and innovative when in the ring together. This one is no different, after Asuka dominates the opening moments, Becky Lynch takes over. The strikes get stiffer and stiffer as the match wears on. Becky is caught with a huge knee on the outside and both are barely able to break the count before 10. Lynch tries for a Manhandle slam but misses and then nearly locks up a Dis-Arm-Her. Asuka responds with a Roundhouse Kick that puts Becky Lynch’s lights out. She will be in the Money in The Bank Ladder Match, and Becky Lynch will not be.

Overall: Considering there was no Cody, no Randy Orton, and no Roman Reigns this was a pretty darn entertaining episode of Monday Night Raw. Asuka and Omos both qualified for the Money in The Bank Ladder Matches. Carmella is the new number 1 contender for the Raw Women’s Championship held by Bianca Belair. AJ Styles picked up a victory over Ciampa. Bobby Lashley is the new number 1 contender for Theory’s United States Championship and Elias made his return to WWE television. Oh yeah, Mr. McMahon cut another in ring promo, this time reminding us that next week John Cena will return to Monday Night Raw.