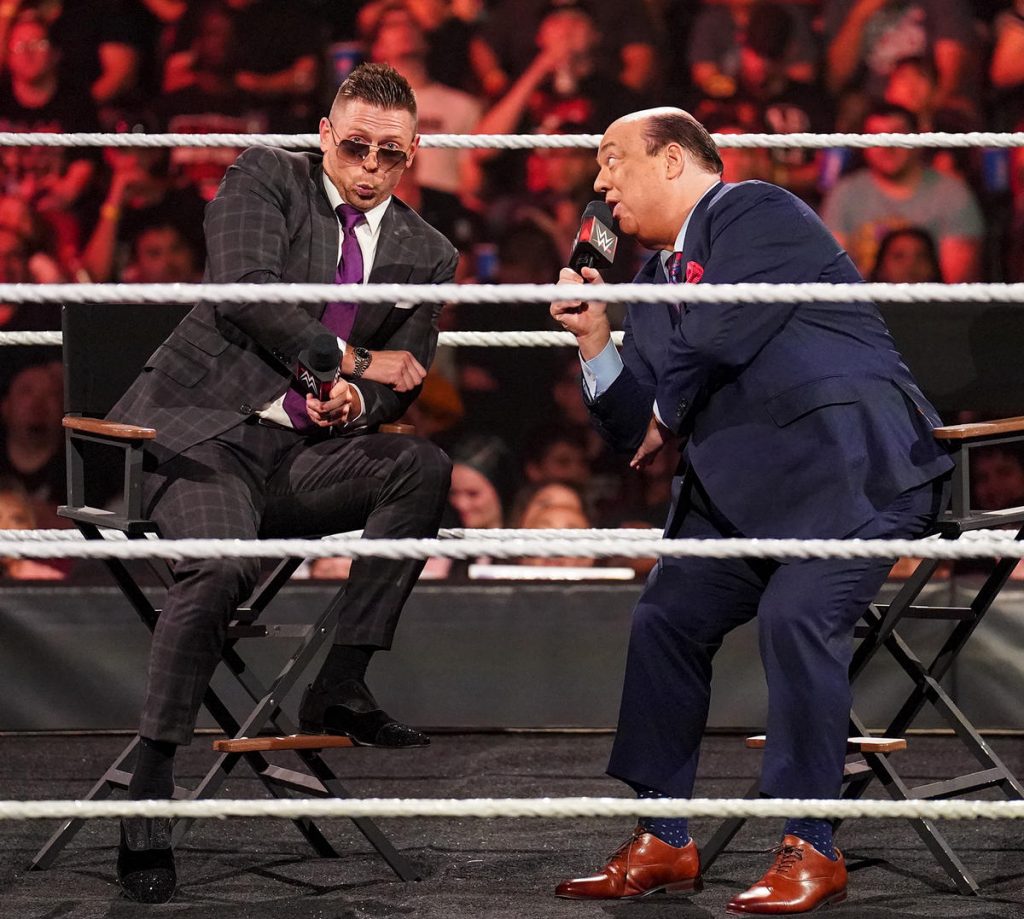 This was a Monday Night Raw that started on a roll, the initial segments were fun. Paul Heyman was incredible as always to open the show on Miz TV. Then the main event fell flat, it’s that simple. It was billed as a, “Pose Off,” and I guess that is what we got, plus all of the baby oil. In other news, Liv Morgan and Alexa Bliss qualified for the Women’s Money In The Bank Ladder Match. Seth Rollins and AJ Styles took us on a ride in their MITB qualifier, they both looked sharp and the match totally delivered. Veer Squashed Rey Mysterio, and Gable virtually did the same to Ali. Oh yeah, Elias, will be on Monday Night Raw next week. The Question is, will Ezekiel be on Raw as well?

Monday Night Raw is live from Wichita, Kansas. We’ve got an explosive night of WWE action, on tap for tonight. What in the world is going on with the Judgement Day stable? Edge is out, Finn Balor is in? Thankfully it looks like tonight we should have some of our other questions answered. Speaking of being moved out… Cody Rhodes is out for 9 months, and while we definitely won’t hear from him tonight, we might hear from the man he defeated 3 times in a row since he’s returned to WWE, Seth Rollins. What is next for Rollins? Who knows.. That and much more coming up in this review.

GREAT Miz Tv: The Miz opens the show by welcoming us to, “Monday Night Raw,” but before Miz is able to make his introduction. He’s interrupted by Paul Heyman, who discusses the Tribal Chief, Roman Reigns before passing things back off to the Miz for some easy one liners about Kansas. Miz makes sure to mention that he is 2/2 when cashing in the MITB briefcase in his career. Paul Heyman’s facial expressions are incredible, the guy has made this entire segment. Heyman begins to speak about the chances that the Money In the Bank contract winner has against Roman Reigns. He says that the chances of someone cashing in the briefcase against Roman Reigns successfully, “is less than Zero.” Paul E. then turns his attention to Riddle, and before he can get a word out edgewise, Riddle interrupts. The crowd absolutely loves Riddle. Riddle also isn’t intimidated on the microphone by Heyman or the Miz, and he’s able to navigate the tough waters of going up against two all time legends on the microphone. His back and forth with Heyman is what got us here, but Miz deserves credit as well. The key to this whole operation comes from Paul Heyman, he wants to add a stipulation to Riddle and Reigns match this Friday. If Riddle loses, “he is never allowed to challenge for the Undisputed Universal Championship again.” Then he brings out the Uso’s, who are suddenly interrupted by the Street Profits. Up next Montez Ford will take on Jimmy Uso 1 on 1.

GREAT Montez Ford vs. Jimmy Uso: Jimmy is the faster starter of the two as they are both in the ring. This match is well thought out, Ford and Uso go back and forth to start before we head to the first commercial break. Out of the break Ford is on skates against Jimmy but he is able to land a lariat. Both men rise to their feet and Ford is starting to feel it. He lands a series of kicks but Jimmy Uso hits an enziguri. Ford responds with an enziguri of his own and now both men are down again. Montez delivers a Dawkins-esque spinebuster and it nearly wins him the match. Jimmy earns himself a near fall with a pop up Samoan Drop. Umaga like(let’s be honest I already used “esque” could you even take me seriously if I typed “Umaga-esque” right after I already said, “Dawkins-esque”?) Both Ford and Uso are gassed but Montez is able to hit a hurricanrana. He tries to deliver a frog splash, but Jimmy gets the knees up and rolls Montez Ford up for the win. This was a brutal loss for Ford, but a really fun and entertaining match.

AMAZING Seth Rollins Backstage Interview: Rollins immediately addresses what happened last monday between him and Cody Rhodes. The first true question he is asked is about whether or not he has “remorse” for his actions last night. Seth does not, and he makes that very clear. This is vintage Seth Rollins, he holds up the sledgehammer, and that is when he explains that he “takes pride” in what he did last week. The follow up question is about what is, “next,” for Seth Rollins. The answer is a Money In the Bank Qualifying match tonight against AJ Styles. Before Seth can finish talking, he’s hit by AJ Styles. This was the best backstage segment I’ve seen in WWE in years, by far.

SQUASH Becky Lynch vs. Dana Brooke for the 24/7 Championship: Lynch immediately jumps all over Dana. Brooke is dumped over the top rope. Becky takes Dana to the outside and grabs a microphone. She has a lot of anger and rage, and not only there she doesn’t care about the 24/7 title. Just before Lynch can beat down Brooke, Asuka interupts and this is now a fight. The match is over, and Dana Brooke is the winner via disqualification. As she leaves, Alexa Bliss makes her entrance. She will be up next.

ABOVE AVERAGE Liv Morgan and Alexa Bliss vs. Doudrop and NIkki ASH: This is an interesting booking, the opportunity for two competitors to qualify at once is definitely unique. Doudrop looks especially good in this one, she has a great exchange with Alexa Bliss before tagging in Nikki ASH. Nikki’s ring gear has clearly changed, as the color scheme is no longer royal blue and yellow, now it is black and gold. Maybe it is ironic, maybe it is not, either way it is definitely relevant. Alexa Bliss is able to connect with a Spike DDT for the victory. Liv Morgan and Alexa Bliss have qualified for Money In The Bank.

SQUASH Ezekiel vs. Kevin Owens: Once again we have KO vs. Zeke. Ezekiel wants his rematch because KO beat him at Hell In A Cell. Last week Kevin Owens agreed to give Ezekiel his rematch, when he falsely admitted that he was Elias to get the match. Ezekiel starts strong and they have clearly good in ring chemistry now that they’ve been wrestling for weeks on end. Zeke wins the match by count out and he wants into  the Money In The Bank Match. He announces he got ahold of his bigger brother Elias. In a major development, Elias will appear on Monday Night Raw, next week, supposedly with guitar in hand.

MVP and Omos in ring promo: Cedric has tried to reform the Hurt Business and it clearly hasn’t worked, after being told off backstage, MVP cuts a promo that is too short to rate and we will have to wait to see what happens with Omos and the MITB briefcase.

AMAZING Seth Rollins vs. AJ Styles Money In The Bank Qualifying: It’s Seth and AJ, what else can I say. These two are absolutely sublime in every way. They could wrestle for a long, long time, and it wouldn’t cease to be entertaining. Rollins hits an insane dive through the ropes into the announce table as we are sent to commercial break. Out of the break they go back and forth and it’s not something you can quantify by going play by play. This isn’t a 5 star match, but these are two 5 star quality professional wrestlers and there is no doubt about that. AJ attempts a Phenomenal Forearm and misses, Seth tries for a Pedigree and misses as well. They know each other too well. Styles is hit with a buckle bomb, but Rollins misses on the 450 splash on the back end. When AJ tries the Styles Clash, Rollins is able to counter for a rollup to win the match. What a wildly awesome match this was.

ABOVE AVERAGE Riddle vs. Ciampa: The match starts quickly and Riddle immediately digs for an armbar and then nearly transitions to a triangle choke. The Miz joins commentary and he is a Ciampa fan. After quite a bit of offense for Ciampa, Riddle is able to connect with a Floating Bro followed by an RKO for the win.

Result: Riddle by Pinfall via RKO

GOOD Bianca Belair in Ring Promo: This was a really good segment. Belair was interrupted by Rhea Ripley shortly into her promo. Ripley lets Bianca know that not only is she the number 1 contender, she is more difficult than any challenge Belair has ever faced.

ABOVE AVERAGE Chad Gable vs. Mustafa Ali: Gable and Ali have a short match. Gable dominates the majority of the action, and garners the heel reactions he tries for from the crowd early and often. Otis inserts himself into the match, and Gable is able to pick up the win with a roll through German Suplex.

Result: Chad Gable by Pinfall via Roll Through German Suplex

SQUASH Rey Mysterio vs. Veer: It’s another Veer Mahan Squash. There is a little offense from Rey Mysterio but not much. Then it is Million Dollar Clothesline, Cervical Clutch. Total dominance.

BELOW AVERAGE Lashley vs. Theory in ring faceoff: The main event is actually a pose off between Lashley and Theory. The Almighty makes his entrance after a commercial, and we don’t have to see them pose to see who is the more physically imposing. The microphone stand off is slightly less embarrassing than the pose off. Theory doesn’t allow the pose off to be decided, he throws a ton of baby oil in Bobby Lashley’s eyes and then he hits him with a dropkick to end the show.

Overall: This was a Monday Night Raw that started on a roll, the initial segments were fun. Paul Heyman was incredible as always to open the show on Miz Tv. Then, the main event fell flat, it’s that simple. It was billed as a, “Pose Off,” and I guess that is what we got, plus all of the baby oil. In other news, Liv Morgan and Alexa Bliss qualified for the Women’s Money In The Bank Ladder Match. Seth Rollins and AJ Styles took us on a ride in their MITB qualifier, they both looked sharp and the match totally delivered. Veer Squashed Rey Mysterio, and Gable virtually did the same to Ali. Oh yeah, Elias, will be on Monday Night Raw next week. The Question is, will Ezekiel be on Raw as well?

Photo Credit: WWE For inquiries about the rating criteria check out the article announcing the new system here: