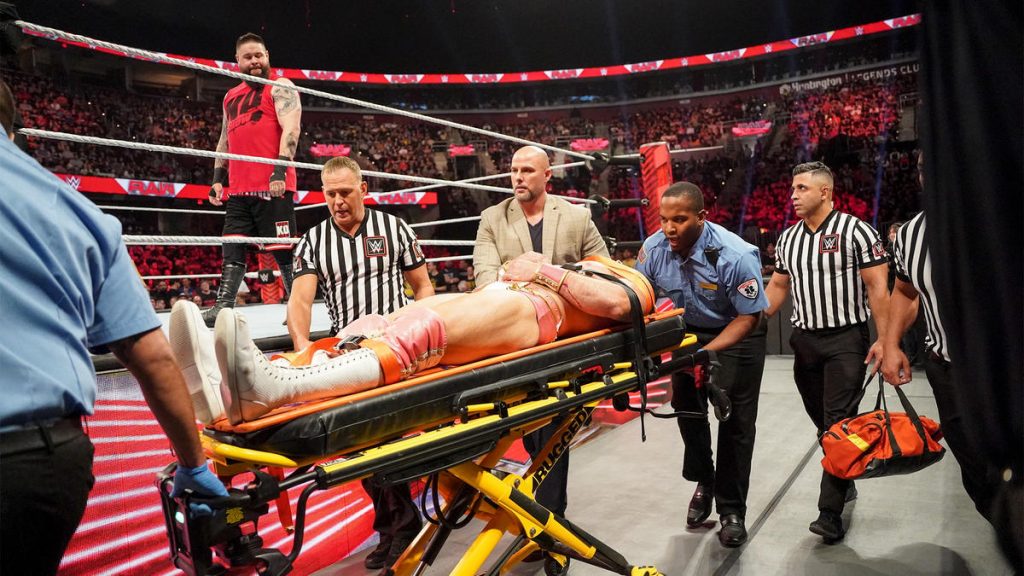 This was an absolutely wild Monday Night Raw! There were tidbits littered throughout backstage segments, there was incredible bell to bell action, and many storylines were advanced. It may not have been the hottest crowd of all time but the Cleveland faithful were clearly engaged throughout. Dominik Mysterio had a very interesting encounter backstage with Edge, then he showed back up on the ramp with Rhea Ripley, and he was in a bad way. AJ Styles and The Miz put on such a fun main event and the Dexter Lumis surprise was even more insane. Seth Rollins directly addressed Riddle and did a hilarious impression of him as well after winning a match against Angelo Dawkins via Pedigree. Oh yeah, Kevin Owens sent Ezekiel to the hospital, and then he was all Zeked up backstage afterwards while there was clearly a car accident in the background.

It is another week of this whirlwind journey that is post, Mr. McMahon WWE. Triple H is at the helm and we are all enthralled by what is happening so far. Tonight, Bayley’s new faction will be in action, as will Seth Rollins, Ciampa, Lashley, and The Miz. All hands are on deck for tonight’s edition of Monday Night Raw!

AMAZING Bayley, Iyo Sky, Dakota Kai promo: Bayley is on the microphone to start Raw, and she is in her element. She breaks down the crowd verbally and then explains her actions over the last few weeks. The crowd reaction is exactly as anticipated and Bayley is in full control as she touts the talents of her new group. They’re clearly as threatening as any heel group we’ve seen in WWE male or female. Asuka, and Alexa Bliss interrupt and then mention the tag team tournament. Bianca Belair joins the babyface side and it looks like we will see an explosive Trio’s Match at Clash At the Castle. After a mic drop a brawl breaks out, and it’s punctuated by a cross body from Alexa Bliss into the entire group in the crowd.

GREAT Angelo Dawkins vs Seth Rollins: Rollins and Dawkins are about to have a huge match here. Seth immediately taunts Dawkins but Angelo hits him with a shoulder block and then follows by throwing him over the announce table. After a commercial break Dawkins is nearly in control of Rollins but he is as smart as anyone and he goads Ford into losing his cool. The referee then kicks Ford out of the ringside area but Dawkins hits a dive over the top rope to the outside. Dawk hits a butterfly suplex for a near fall, but Rollins kicks out at 2. Rollins uses the pedigree to pick up the win and the crowd responds in kind. This was an exciting opening match and the crowd was into it for most of the match. While not the greatest effort of all time out of these two this was definitely a match worth watching.

Edge and the Mysterios backstage segment: Edge makes an attempt to apologize to Dominik but the young Mysterio is not having it and not only that he actually shoves Edge. Rey tries to talk him down and while this segment is too short to rate, it’s one worth watching.

Ciampa and Miz interview: Before Ciampa can speak he is interrupted by The Miz. This is too short to rate, but also a must watch.

SQUASH Kevin Owens vs. Ezekiel: Zeke is already in the ring to start the match and then KO is all over him. KO absolutely shatters him over the announce table with a backdrop and then he follows with a powerbomb on the apron. This match is very quickly violent, and Exekiel is brought to the backstage area via stretcher due to injury.

Judgement Day Promo: Finn Balor takes the microphone to the immediate boos of the live crowd. He expresses that they are not afraid of anyone. The microphone is passed to Damian Priest and they now call out Edge. Priest challenges him to a match on Raw in Toronto. The call out is official and we will have to wait to hear Edge’s reaction. Rey Mysterio is shown backstage but Edge is with him and he’s unsure that they can find Dominik. Too short to rate.

GOOD Rey Mysterio vs. Finn Balor: Balor dominates the early action, but Mysterio fights back. Damian Priest inserts himself into the action and as we head to commercial Balor is in control. Out of the break Balor is still in control but when the Judgement Day uses the numbers advantage, Edge inserts himself into the situation. Rhea Ripley has Dominik at the top of the ramp and the distraction allows Balor to hit the 1916 and then the Coup De Gras and that is the end of it.

GOOD Iyo Sky and Dakota Kai vs. Tamina and Dana Brooke: Brooke and Sky start the match in the ring. Dakota Kai is quickly tagged in but Dana Brooke is able to mount quite a bit of offense before the commercial break. She hits a crossbody onto both Kai and Sky as we head to a break. Out of commercial Sky and Kai are in control. After a major back and forth, Sky lands a moonsault on Tamina to win the match.

Kevin Owens backstage segment: KO is asked about what he did to Ezekiel earlier. He explains that it’s still his show and that’s why he did what he did. Too short to rate.

AMAZING Ciampa vs. Bobby Lashley United States Championship Match: Lashley and Ciampa put on an extremely physical match. The Miz is at ringside supporting Ciampa but his intentions aren’t exactly clear. Lashley cuts Ciampa in half with a spear but The Miz puts his foot on the ropes before the count. AJ Styles attacks Miz from out of nowhere but the distraction allows Ciampa to roll Lashley up. Despite kicking out, Lashley is down long enough that Ciampa has time to untie the turnbuckle. Ciampa throws Lashley into the exposed buckle twice and then hits a pump knee strike but Lashley kicks out. He even hits the Willows Bell but Lashley is able to kick out of that as well. Lashley drills Ciampa with a one armed spinebuster and ties him up in the Hurt Lock for the victory.

SQUASH Omos vs. Local Talent: This is not a good night to be local talent. Omos, demolishes them in every way imaginable. Then he wins. One of the poor guys is wearing headgear but it doesn’t look helpful. Technically it’s a two handed chokeslam for the finish, and that is it.

AMAZING Seth Rollins Backstage interview: Seth is asked about Riddle and he is not happy about it. He told everyone last week that he is done with Riddle. Rollins does a hilarious impression of Riddle and explains that he is the gatekeeper of this industry. He then says that Riddle is great at flushing his potential down the toilet, and he makes an incredible Dana White reference. Rollins ends the promo by saying that he will also be speaking next week if Riddle will be.

GREAT Dolph Ziggler vs. Gable: The Alpha Academy entered first followed by Dolph Ziggler. There is an Alpha Academy vignette played as they return from the commercial. Ziggler and Gable put on a high quality grappling match here. This is one of the more technical matches we have seen on Raw in years. Gable nearly has Dolph in an ankle lock but Ziggler is able to free himself and he wins the match with a thunderous Superkick.

AMAZING The Miz vs. Aj Styles No Disqualification: The crowd is firmly behind Styles as The Miz makes the walk tonight. All of the weapons are in play in this one and that is immediately apparent. Miz and Styles use chairs and tables and even a kendo stick. Ciampa interferes about halfway through the match but AJ Styles drives him through a table outside the ring. The Miz nearly uses the distraction to win the match but AJ Styles rocks him with a right hand. Styles attempts a Phenomenal Forearm but Miz hits him in mid air with a chair and follows that with a Skull Crushing Finale. It is not the finale as the match continues with Styles kicking out. Miz drills AJ in the stomach with a kendo stick and then he locks for a figure four but he’s sent into the corner into a chair. AJ Styles hits the Styles Clash and he wins the match. After the finish there is a commotion in the crowd and it is clearly Dexter Lumis! What an incredible main event but this ends with Styles standing tall.

Overall: This was an absolutely wild Monday Night Raw! There were tidbits littered throughout backstage segments, there was incredible bell to bell action, and many storylines were advanced. It may not have been the hottest crowd of all time but the Cleveland faithful were clearly engaged throughout. Dominik Mysterio had a very interesting encounter backstage with Edge, then he showed back up on the ramp with Rhea Ripley, and he was in a bad way. AJ Styles and The Miz put on such a fun main event and the Dexter Lumis surprise was even more insane. Seth Rollins directly addressed Riddle and did a hilarious impression of him as well after winning a match against Angelo Dawkins via Pedigree. Oh yeah, Kevin Owens sent Ezekiel to the hospital, and then he was all Zeked up backstage afterwards while there was clearly a car accident in the background.