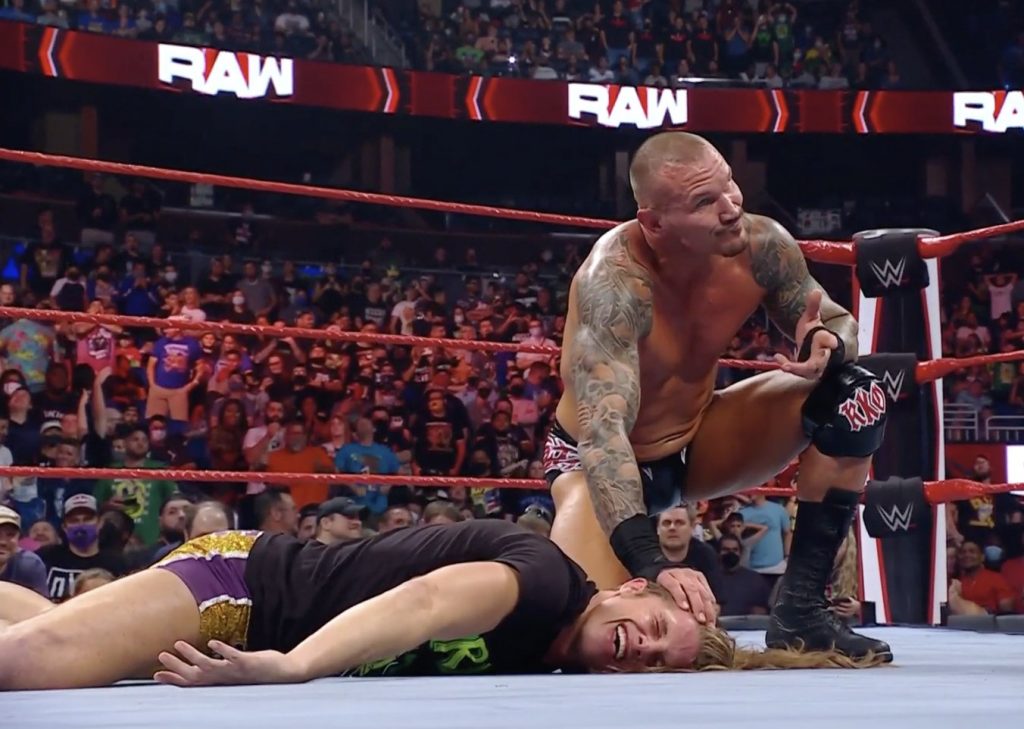 Last week’s episode of Raw left a lot to be desired. Three good matches weren’t enough to save a show plagued by mediocre segment after mediocre segment. Can Raw redeem itself this week? Let’s find out!

GREAT: The show starts off with the long awaited return of Randy Orton. Orton gets a great reaction and a warm reception from the crowd as he’s interrupted by Riddle before he gets a chance to properly say anything. Riddle tells Randy he misses him and asks him where he went. He says that now that Randy’s back they can get back to being RKBRO. Randy, however, thinks that they both work better alone and declines. The two are then interrupted by the Raw tag team champions AJ Styles and Omos, who mock them. AJ questions why Riddle thinks Randy would ever be his friend due to Orton’s past. Orton tells AJ to shut up and says the only thing bigger than his ego is Omos himself, who he calls a jackass. AJ challenges Orton to a match tonight, to which Randy accepts. Omos attacks Randy but Randy gets the upper hand and tries to hit the RKO but is unsuccessful. This is followed by a great spot where Riddle tries hitting the RKO and is almost successful, but not quite. Riddle is caught halfway and is chokeslammed by Omos for his troubles. Randy looks over Riddle in disappointment to end the segment. This was a really fun segment to start the show with. The RKBRO saga continues to be one of the highlights of Raw.

GOOD: Baron Corbin is on Raw somehow and says that he’s going to challenge Drew McIntyre to a match tonight. He continues talking about how his life has gone downhill and is forced to sleep in the production truck. However, he says that he got an offer from Jinder Mahal to take out Drew tonight and says that while he’s not crazy about stepping in the ring with Drew, he’ll do anything to get a paycheck and fix his financial woes. I liked this segment. It presented a decent explanation as to how Corbin is on Raw, saying that he’s a mercenary for hire from Jinder. Corbin also has this sincerity to his promos now with this poor gimmick. I also like that Corbin isn’t happy about this match, but he needs the money more than anything.

AVERAGE: Up next is Drew McIntyre vs Baron Corbin. This was an alright match with a weird mid match promo from Drew where he offers to give Corbin money to help him get back on his feet. Corbin asks for $100,000 which Drew obviously finds outrageous. He plays with the crowd a bit until he hits the Claymore and wins. This match was fine but the finish seemed a tad out of place. It felt like a house show spot, not something for Monday Night Raw. Post match Jinder, Veer and Shanky come out to try and antagonize Drew but Drew quickly scares them off with his sword.

GOOD: Randy Orton is backstage as he’s interrupted again by Riddle. Riddle asks, even though they’re not a team, if they’re still friends and asks if he can be in his corner tonight against AJ, but Orton says no. Orton leaves as Riddle is devastated. A fun, short segment to further the story of the night for the team.

GOOD: Up next is Jeff Hardy vs Karrion Kross for the second time. Kross has a short pre match promo saying that Jeff ruined his debut and that a twist of fate brought Jeff back to him for revenge. Overall, this was a good performance for both men. Kross and Jeff both looked good here and Kross getting a much needed win was better for him then eating another loss. Post match, Kross inflicts more damage on Jeff by putting the choke back on.

AVERAGE: Riddle is backstage depressed as he’s asked if this is the end of RKBRO. He says that he’s confused and that he doesn’t know what to do or how to feel. However, he respects Randy’s choice in the end. Another short, decently good segment to further the RKBRO storyline.

POOR: Up next is Alexa Bliss vs Doudrop. This match wasn’t inherently bad per se but this match had way too much stalling and needless padding. Plus, the finish was really stupid with Lily winking at Doudrop which allowed Alexa to roll her up for the win. The action itself wasn’t that bad but everything else made this match poor and harder to get through.

AVERAGE: Backstage, The Miz and John Morrison talk about their hatred for Damian Priest as they’re interrupted by Sheamus. Sheamus is upset at them for costing them the six man tag last week and bickers with Morrison until Miz backs him off. A decent segment here.

GREAT: Up next is Sheamus vs Ricochet. This was a really fun back and forth match here. Ricochet continues to have great performances on RAW with insane spots. This week was a springboard press to the outside, planting Sheamus on the announce table. From here the two had a great back and forth and the finish was pretty good too. Ricochet goes for a top rope splash but collides with Sheamus’ face mask, knocking him senseless. Sheamus takes advantage and hits the Brogue kick for the win.

AVERAGE: Post match, Damian Priest comes out to confront Sheamus, but Sheamus backs off. Sheamus, however, tries to blindside Priest but to no avail. Morrison then comes out to set up the next match.

GOOD: Up next is John Morrison vs Damian Priest once again. Much like last week this was a good match with a lot of stiff action. The finish was a bit whatever as Miz sprays Priest with the drip stick, but Priest simply hits Reckoning anyways and wins. Kinda pointless there Miz.

AVERAGE: Post match, Priest goes to confront Miz who somehow stands up from the wheelchair! The Miz is HEALED!! Miz runs off to the back as Priest grabs a mic and calls out Sheamus. Sheamus comes out and says that it’s easier for Priest to talk a big game when he’s not around. Priest officially challenges Sheamus to a match at Summerslam for the United States championship. Morrison tries attacking Priest yet again but fails, as Priest says that that is what Sheamus is gonna look like come Summerslam. A decent promo from Priest but I’m hyped for the match.

AVERAGE: Mansoor is backstage with Ali and apologizes for messing up last week and gives Ali a sweet new ring jacket. Ali loves it and says he’s not mad that Mansoor made a mistake last week, but wants him to learn from it and follow his lead tonight. A decent, short segment once again.

GOOD: Up next is Mustafa Ali vs T-Bar. Honestly, this was a pretty fun back and forth here. This also might be one of Dijackovic’s better performances since coming to the main roster. Mansoor puts Ali’s foot on the bottom rope during a pin and tells the referee, which gets him taken out by Mace. Ali takes control until Mace distracts him, allowing T-Bar to take advantage and hit Feast Your Eyes for the win.

AVERAGE: Post match, Mace and T-Bar try beat up Ali but he’s saved by Mansoor who cleans house and sends the heels packing.

GOOD: Reginald is backstage as he poses for a photo op when he’s ambushed by Akira Tozawa and R Truth in disguises. Both men try pinning him for the 24/7 title, but they keep getting in each other’s way. Reginald continues flipping and jumping around to escape, Truth hilariously saying that Reginald is on “XBOX mode.”  A fun segment and Reginald continues to be surprisingly entertaining.

GOOD: AJ Styles and Omos are interviewed backstage about Randy Orton coming back. AJ jokingly says that it was a feel-good moment but gets serious and says that Randy has no right to come back and immediately think he can climb to the top of the mountain.

GREAT: MVP and Bobby Lashley are out next and they discuss Goldberg. MVP talks about how Goldberg re injured him last week after getting speared because he thought he was antagonizing his son. MVP says that at Summerslam Bobby Lashley is gonna end the career of Goldberg.

AVERAGE: Rhea Ripley cuts a backstage promo talking about how even though Nikki is almost a superhero, almost isn’t good enough to be the champion. Once again one of the better promos from Rhea in recent weeks.

SATISFACTORY: Nikki A.S.H. cuts a pre match promo that’s honestly no different than any other promo she’s cut since this gimmick began. More talking about positivity and spirit. Nothing bad, just way too overdone.

GOOD: Up next is Rhea Ripley vs Nikki A.S.H. This was a really fun match up until the finish. There was a great spot where Rhea went for the Riptide but Nikki countered into a press and almost beat Rhea. The finish kind of killed this match a bit as Charlotte came in to cause the DQ. Otherwise, a good match. Post match, Charlotte hits Natural Selection on Rhea.

GREAT: A promo package for Elias plays with him standing over a fire with guitar in hand. He reflects on how people have constantly used his guitar against him and proclaims that Elias is dead. He solidifies this by burning the guitar and walking away. While I’m hesitant to see the Elias character die, I’m very game to see where this new character leads.

GOOD: Finally it’s our main event as AJ Styles takes on Randy Orton. This was a fun match overall. Omos tries making the save for AJ towards the end but is stopped by Riddle. AJ goes for the phenomenal forearm but is caught in a midair RKO! FANTASTIC! Orton picks up the victory.

GREAT: Post match, Riddle tries getting a hug from Randy but Randy refuses. The crowd and Riddle egg Randy on until he eventually gives in and reluctantly hugs Riddle to a great pop. A nice, heartwarming moment to end the show. OR IS IT?! Randy instead ends the show by laying out Riddle with the RKO. I love the dynamic with RKBRO and I’m really interested to see where this leads potentially heading into Summerslam.

Overall, this was a surprisingly fun episode of Raw tonight. A lot of good in-ring action mixed in with a lot of great RKBRO development. The only downside to Raw, as always, is the insistence on constant rematches that we’ve seen 100 times.