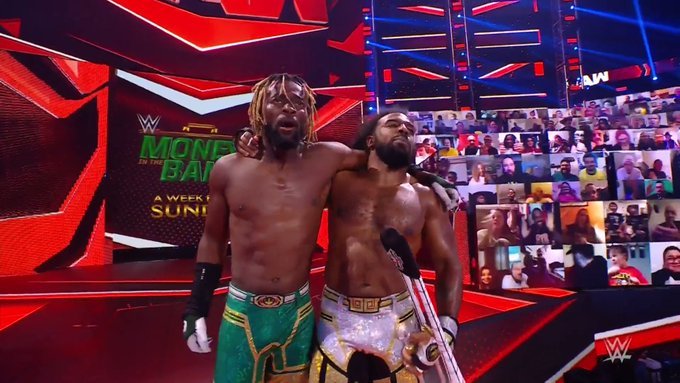 Over the past several weeks, Raw has been able to put on highly enjoyable shows heading into the Money In the Bank PPV. From great in ring action to the creation of captivating storylines heading into the show, will Raw be able to continue their hot streak of momentum? Let’s find out!

AVERAGE: First up, we have an edition of  MizTV where The Miz and John Morrison bring out the Raw competitors for the men’s money in the bank ladder match. Miz says that he is a money in the bank expert because he’s won the briefcase twice and says that Morrison will win. Drew McIntyre comes out first and says that he has a love-hate relationship with the briefcase because that’s how he lost the WWE title to Miz in the first place. Drew talks about how he’s a distant descendant of Davy Crockett and honestly I’m really sick of McIntyre’s history lesson gimmick. Ricochet comes out next and Miz calls him rude for coming out prematurely. He says that Ricochet could’ve ended both his and Morrison’s careers last week which is a good point considering the crazy spot they had. Ricochet says that he will use Miz as a battering ram if he needs to to win the match. Riddle comes out and climbs the ladder and makes a joke about being high which was honestly pretty funny, though expected. AJ Styles comes out and reinforces his point that the triple threat match shouldn’t have even happened last week and it should’ve just been him vs McIntyre. Riddle starts talking to AJ and Omos until Omos pushes him off the ladder, reinjuring Riddle’s foot. I get the sneaky suspicion that this is gonna lead to Riddle being taken out of the match and AJ gets his spot due to injury. Everyone starts to brawl until the faces emerge victorious. Overall, the segment was very hit or miss. There were fun moments like Riddle being hilarious and the story of Riddle’s foot continuing to be a factor, but there were a lot of cringey moments in this, too, like Drew being related to Davy Crockett and Ricochet spelling out his name while dancing. Not a bad segment by any means but a lot of weird parts that kept the segment from being straight up good.

GOOD: Up next is a rematch from last week as Ricochet takes on John Morrison. This is a rematch I am perfectly ok with because last week’s match ended in a double countout after an insane spot, so a rematch between the two to decide a clear winner makes sense. The match started off really slow with endless headlocks but picks up once Morrison reverses another wheelchair spot from Ricochet into a power bomb onto the barricade. The two have another crazy spot to the outside that results in Ricochet being counted out. However, the way it was done was actually kind of creative with miz blocking ricochet’s path into the ring with the wheelchair, allowing Morrison to pick up the win.

GOOD: Jinder Mahal rides into the arena on a motorcycle! He talks about his friendship with Drew McIntyre and how Drew was with him when he bought the bike. Mahal says that he asked Drew if he wanted to go for a ride, but Drew said he was too busy. Jinder talks about how Drew already qualified for money in the bank and that Drew took his spot. I liked this segment for the most part. I like that they’re finally running with the Drew McIntyre-Jinder Mahal friendship angle. I just hope it turns out to be good.

SATISFACTORY: Nia Jax, Shayna Baszler and Reginald are backstage when Reginald points out that Alexa Bliss is watching them. However, neither Shayna nor Nia see her. Shayna tells Reginald to get a grip and focus but Nia calms Shayna down before their match tonight. The segment ends with them leaving as the camera pans to Alexa watching them once again. A decent little segment but nothing too extraordinary.

AVERAGE: Up next is an 8 woman tag team match with Alexa Bliss, Naomi, Asuka and Nikki Ash taking on Nia Jax, Shayna Baszler, Eva Maria and Doudrop. Before the match, Nikki talks with Asuka and Naomi backstage, who are excited for her new character. Nikki reinforces the point that she’s not quite a superhero yet but will soon get to that level. Nikki goes to the ring when Alexa shows up and says to not underestimate her. Honestly a relatively decently fun match for the part with a few noticeable botches here and there. Post match Eva announces that she is the winner much to the dismay of everyone else.

GOOD: MVP and Lashley are backstage and are asked why MVP changed the match tonight to a tag match. MVP says that he made it a tag match because Xavier doesn’t deserve to be in the same ring as Lashley from this point forward after Lashley destroyed him in the hell in a cell match. Lashley continues to say that Kofi doesn’t deserve to be in the ring with him and tonight he’ll prove that. Another enjoyable promo from MVP and Lashley building to the WWE title match at the PPV.

GOOD: Up next is Mustafa Ali vs Mansoor. So far, I really, really enjoy this storyline of Mustafa teaching Mansoor to survive in WWE. I love the dynamic of Mustafa saying that he’s trying to prevent Mansoor from failing like he did. Mustafa gets his feet caught in the ropes and Mansoor ends up reluctantly freeing him. This proves to be his downfall as Mustafa lures him into a trap and pins him for the win. A short yet enjoyable match that furthered this story in a logical and interesting way.

AVERAGE: Up next is Drew McIntyre vs Jinder Mahal. Drew McIntyre responds to Jinder’s accusations that he stole his spot in the ladder match. He says that opportunities are not given, they’re earned. Drew then talks about how his sword is a family heirloom and is made out of a tooth from the Loch Ness monster and that he’s gonna use the sword to beat Jinder. Ok? I guess? The match itself was honestly pretty alright and the finish was honestly expected. Drew is about to win with the claymore but is attacked by Sheer and Vanky. Post match Drew is beaten down by the trio and is hit with the Khallas. Jinder finishes the segment by taking Drew’s sword. I honestly wouldn’t mind this being a little feud going into Summerslam to be honest. I really don’t want Drew anywhere near a world title again for a while and a feud with Jinder would be a good distraction.

GOOD: The New Day is interviewed about their upcoming match later tonight. Kofi says that they have no reason to be afraid because WWE named them the greatest tag team in history. He also says that Lashley came back from his “vacation” early because everything Kofi said last week about him and MVP is the truth and they can’t handle the truth. Another enjoyable segment from the New Day. The build for Kofi has been very enjoyable so far and, while I know he’s not beating Lashley, they’re doing a good job at trying to suspend my disbelief that Kofi could win.

AVERAGE: Up next is a tag team match with Mace and T-Bar taking on Lucha House Party. This was a very fun squash with Mace and T-Bar demolishing Metalik and Dorado. And then they lose. Why? Why couldn’t they just simply win? Oh well. A decent match overall with the wrong team going over.

GOOD: Riddle is backstage nursing his injured foot when Damian Priest shows up. Priest warns Riddle to be careful in his match with AJ because of his foot and that he could be in danger of losing his shot at money in the bank because of it. Riddle says it’s ok and that he’s come this far and won’t squander his opportunity. He finishes by saying that he’s gonna win with the three most devastating letters in sports entertainment: RKBRO. Someone should tell him that that’s five letters. Overall, a fun segment that furthers Riddle’s storyline going into the match. I really like the amount of story Riddle is getting going into the match. It makes him feel like a bigger deal compared to the other competitors.

GREAT: Up next is AJ Styles vs Riddle. This match is almost all AJ focusing on Riddle’s injured foot and that is 100% what this match should be. Towards the end of the match, the Viking Raiders appear behind the barricade and distract Omos. This in turn distracts AJ which allows Riddle to capitalize and pick up the victory. Really great stuff here from these two guys.

BAD: Charlotte Flair comes out with a crutch and addresses the WWE universe about her injury she sustained last week after Rhea Ripley chop blocked her. Charlotte says that she might miss Money in the Bank and says that Rhea only did it because she knows she can’t beat her. Rhea Ripley comes out hobbling on a crutch of her own, mocking Charlotte’s injury. Rhea says that she’s only doing what Charlotte would do and that she’s acting like a drama queen. Both women drop their crutches and reveal both injuries are fake. They awkwardly start fighting each other with the crutches until Charlotte leaves. Now, this segment was not awful. However, this was an absolute waste of time. The injury angle was absolutely pointless and the whole “I’m doing what Charlotte is doing” story could work in theory, but it’s written so badly that it’s hard to get invested at all. And on top of ALL of that: WHO IS THE HEEL IN THIS FEUD! I HAVE NO IDEA WHO I’M SUPPOSED TO ROOT FOR!

SATISFACTORY: Up next is a tag team match with Elias teaming up with Cedric Alexander to take on Jaxson Ryker and R-Truth. The 24/7 champion Akira Tozawa runs into the ring being chased by wrestlers as Truth tries pinning him for the belt but is unsuccessful. Truth then gives chase to win his baby back rather than team with Ryker. Elias also leaves Cedric high and dry because he’s scared of Ryker. Ryker just simply pins Cedric immediately after. This was honestly more of a segment than an actual match so I’m grading this on a curve. The 24/7 shenanigans were enjoyable and the match was mercifully short. That was really about it.

GOOD: Finally, we have our main event tag match as the New Day take on MVP and the WWE champion Bobby Lashley. Xavier immediately targets MVP’s knee which is the smart thing to do considering MVP’s injury. A lot of really smart limb targeting on this show, actually. An enjoyable match with Kofi getting the better of MVP once again and building momentum towards his big title match.

Overall, Raw was not as enjoyable as the last several weeks. However, I still found the show enjoyable for the most part. I love everything that they’re doing with Riddle right now and the WWE championship feud is very well done as well. Even lower midcard feuds like Mustafa Ali and Mansoor I really like a lot. The lowest point of this show was definitely the Rhea and Charlotte segment, an absolutely pointless waste of 10 minutes.