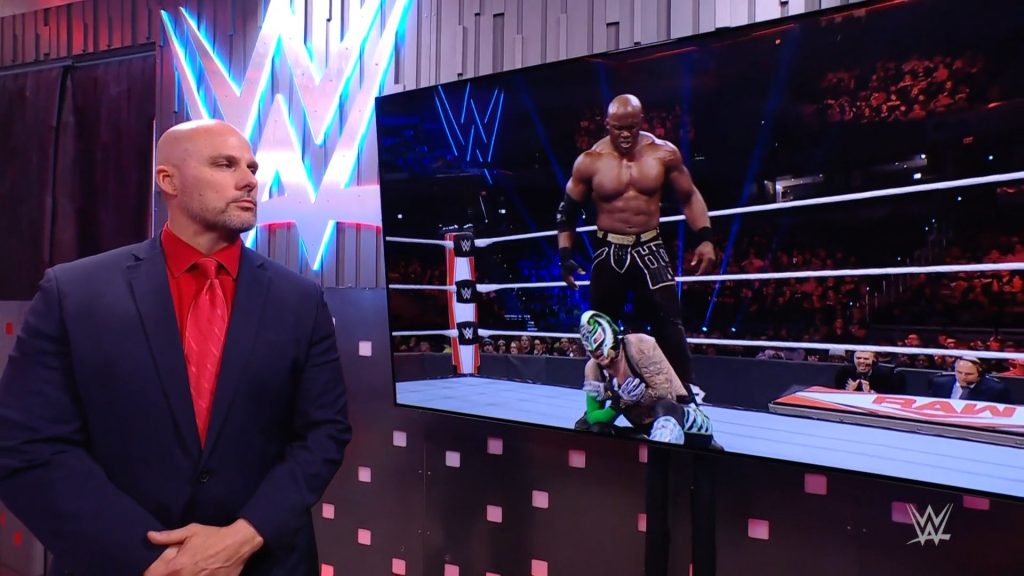 Last week’s episode of Monday night Raw proved to be an entertaining episode overall. Liv Morgan being crowned the number one contender for the raw women’s championship, a great match between Seth Rollins and Kevin Owens, and a much needed heel turn from Owens made for a better show than recent weeks. With Survivor Series this Sunday, can Raw keep their momentum heading into the PPV? Let’s find out!

MUST WATCH: The show kicks off with the WWE champion Big E, who talks about his match Sunday at Survivor Series against Roman Reigns. He says that their match was supposed to be about brand supremacy, but Roman made it personal after hurting his brothers. He says that Sunday, he’ll beat Roman’s ass, but tonight he’s going to deal with Kevin Owens for his actions last week. Owens comes out and says that Big E cost him his match, on top of questioning his integrity. This ended up causing him to snap. He says that Big E convinced everyone to judge him harshly and he’s sick of it. He says that he’s going to get his hands on everyone in the locker room and that whatever happens is Big E’s fault. E wants to fight, but KO declines. Big E goes to get Owens but is attacked by the Usos. The Usos beat him down as they say that Roman Reigns says his regards. However, Riddle comes out to make the save. Sonya Deville ends the segment by coming out and making a tag match between the Usos and Riddle and Big E. Seth Rollins also comes out for an unknown reason. This was a very fun way to start the show. A great promo from Big E, a great promo from KO, the Usos building to Survivor Series. Good stuff here.

SATISFACTORY: Up next is Big E and Riddle vs The Usos with Seth Rollins on commentary. The faces dominate the first half, Big E going as far as to attack Seth Rollins. This angers Rollins who comes in to attack Big E, causing the DQ. Post match, the Usos and Rollins beat down Big E and Riddle until Randy Orton comes out to make the save. I smell a six man tag match coming.

GOOD: Lo and behold, we get a six man tag team match as RKBRO and Big E take on Seth Rollins and the Usos. Thankfully, this is actually a really good match. The finish came rather abruptly after Seth hit two rolling elbows to the back of Riddle’s head.

AVERAGE: Bianca Belair is interviewed backstage about what happened with Doudrop last week. She says that if Doudrop has an issue with her, to settle it tonight in a match. Tamina shows up and challenges Bianca to a match instead, to which Bianca accepts.

GOOD: Kevin Owens is stopped backstage and is asked about his integrity. Owens says that his lying was actually telling the truth. Finn Balor shows up and says that he doesn’t trust Owens. He says that he was supposed to face Rollins tonight, but now he’s gonna face Owens.

AVERAGE: Up next is Bianca Belair vs Tamina. This was a fairly decent match. Bianca eventually wins with the KOD to put Tamina away.

AVERAGE: Post match; Doudrop comes out and says that she won’t come down to face Bianca after her match, as it wouldn’t be very sporting. After Survivor Series, however, Doudrop is gonna come looking for Bianca Belair. This feud could honestly be very interesting.

MUST WATCH: Up next we have the Raw Women’s champion Becky Lynch. Becky talks about how her and Charlotte used to be friends and that Charlotte was the star, while Becky broke out of the background. Liv Morgan eventually interrupts and says that last week Becky brushed her off and that won’t happen again. Liv talks about how before Becky left, she told Liv she would be champion, however that didn’t happen. Now that Becky is back, Liv isn’t getting the belt. Liv finishes by saying that she used to idolize Becky, but now Big Time Becks is a big time bitch. Becky tries to hit Liv with the Manhandle slam, but Liv reverses it into an arm drag and sends Lynch to the outside. The segment ends with Liv holding the Raw Women’s title.

GREAT: RKBRO is backstage and Randy chastises Riddle for once again getting involved in the business of other people. Orton says that he only cares about two things: RKBRO and the tag team titles. Riddle is touched that Randy cares about him, but Randy just leaves in anger. The Street Profits show up and talk to Riddle, saying he doesn’t have to change for Randy and they finish by saying they’ll beat Alpha Academy tonight.

GREAT: Up next is Alpha Academy vs The Street Profits. This was a very fun match. Otis looked great and the nickname 4.Otis is tremendous. The finish sees Montez hit Chad Gable with a splash from the top rope and pins Gable for the win.

AVERAGE: Adam Pearce is backstage when he’s interrupted by Rey Mysterio. Rey is pissed that Dominik was taken off of Team Raw. He questions Pearce’s integrity as a man, which prompts Pearce to put Rey into a match with Bobby Lashley tonight.

AVERAGE: Up next is Nikki A.S.H. Vs Queen Zelina. This was an alright match. Zelina wins after hitting code red.

AVERAGE: Immediately after we have Carmella vs Rhea Ripley. This was definitely a better match than the other one but not too much different. Rhea eventually wins the match after hitting the Riptide.

AVERAGE: Zelina cuts a promo afterwards saying that her and Zelina will lead the Raw team to victory.

GOOD: Big E interrupts Adam Pearce and says that he wants his hands on Kevin Owens. Pearce tells Big E to calm down before he suspends him like he did Brock Lesnar.

GOOD: Seth Rollins is interviewed backstage about Survivor Series. He says he’s going to lead Team Raw to victory Sunday and then turn his attention to taking the WWE title off of Big E

GREAT: Up next is Finn Balor vs Kevin Owens. This was a very fun match between two excellent wrestlers. KO eventually wins after hitting the stunner in a great match.

AVERAGE: AJ Styles and Omos are backstage and run down the Dirty Dawgs and the rest of the tag team division. They say that The Dirty Dawgs cost them the match last week and tonight they’ll hurt them for it, a la Godzilla. The Dirty Dawgs immediately have a promo, saying that AJ and Omos remind them of Schwarzenegger and Devito from Twins.

AVERAGE: Up next is AJ Styles and Omos vs the Dirty Dawgs. This was an alright match. AJ and Omos eventually win after AJ hits the phenomenal forearm on Ziggler.

AVERAGE: Bobby Lashley is interviewed backstage about having to face Rey Mysterio tonight. He says that Dominik shouldn’t have been on Team Raw in the first place and that Rey can sit back and watch him single handedly destroy Team Smackdown.

GOOD: Finally we have Rey Mysterio vs Bobby Lashley. This was a fun, yet typical, Rey Mysterio underdog match. Lashley dominates for most of the match until Rey builds a comeback, eventually hitting the 619. He hits the splash and pins Lashley, who rolls through and puts Rey in the Hurt Lock to win the match.

GOOD: The show ends with Adam Pearce coming out and saying that, for the betterment of Team Raw, Rey Mysterio is now off the Survivor Series team and will name his replacement later. Austin Theory comes out and hits the ATL on Dominik. Pearce ends the show by saying that Theory will replace Rey this Sunday.

Overall, this was an entertaining episode of Raw. A lot of good matches like Finn vs KO and Street Profits vs Alpha Academy, a great segment with Becky and Liv and a refreshing return to heel Kevin Owens made for a fun show for the most part. The show dragged at a few points with a lot of backstage segments but still a good show.