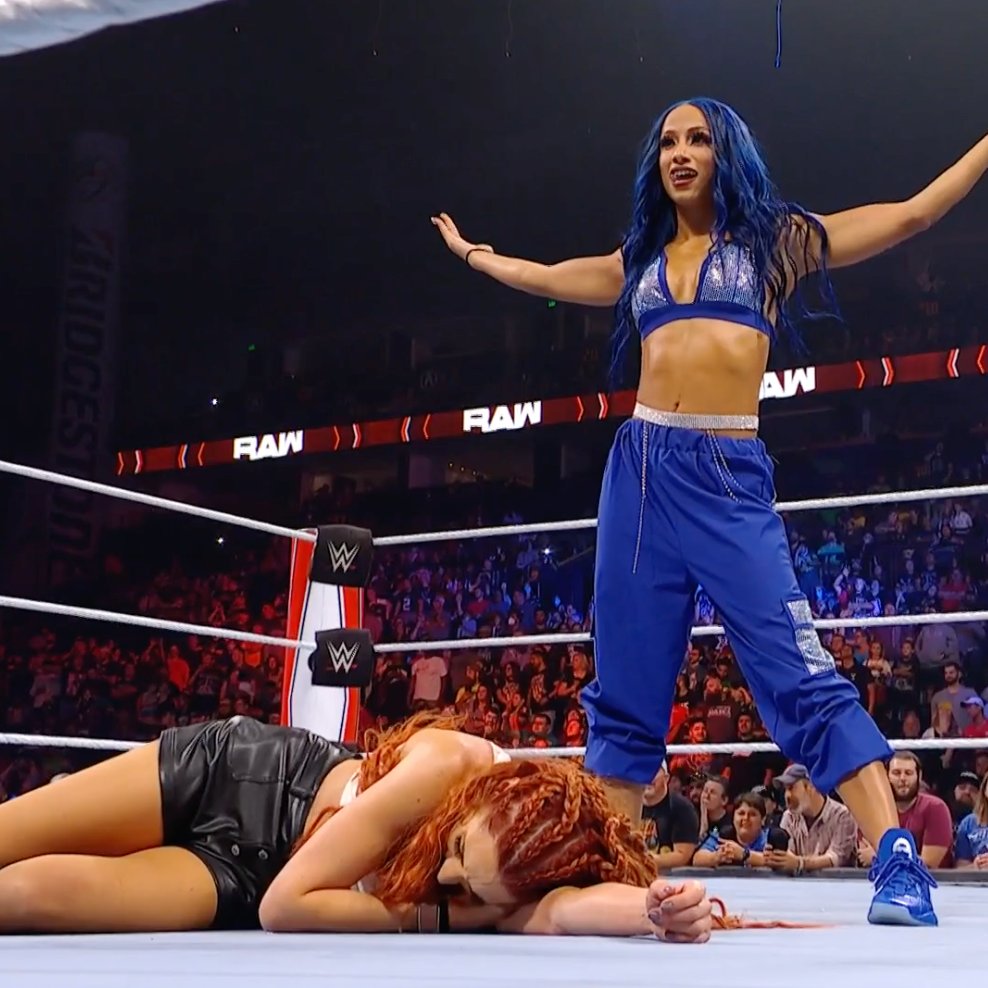 Tonight marks the prelude to a new era for the WWE. The WWE draft will seek to shake things up for Raw and SmackDown, moving superstars between brands, altering storylines, breaking up tag teams. We may even see some NXT call ups along the way. Will the draft be successful enough to keep fans’ interests? Let’s find out!

GREAT: The show interestingly kicks off with the Smackdown Women’s champion Becky Lynch. Becky is out here to jump the gun and announce that she’s the first draft pick for Monday Night Raw. Becky hypes up that she’s the longest reigning Raw women’s champion and considers the thought of challenging Charlotte for said title to once again become Becky2Belts. Charlotte Flair interrupts her and says that she made Becky into the man. Bianca Belair interrupts as well and says that neither of them are ready for the EST after jumping her last Friday. Charlotte says that Bianca should be thanking her for paving the way for women’s wrestling. Becky continues stirring the pot and tries getting Bianca to fight Charlotte tonight. Sonya and Pearce come out and make the match official as well as announcing two more title matches tonight.

GOOD: Round 1 of Night 2 of the draft is underway. The picks are as follows:

GOOD: Up next is for the United States championship as Damian Priest defends against Jeff Hardy. This was a very solid opening match. Priest has had a fantastic title run so far and this match is no exception. The finish sees Jeff hit the swanton, but Priest reverses the pin into a pin of his own for the win in a good match.

GOOD: Jeff is interviewed after his match and talks about his highs and lows in WWE. He says that Smackdown could be a new start for him and teases bringing a new side of him to the blue brand. Austin Theory comes out and says that he’s always been a big Jeff Hardy fan and asks for a selfie with his hero. Theory, however, attacks Jeff instead and poses with Jeff’s body. This was really good stuff and a great reintroduction for Theory to the main roster.

AVERAGE: RKBRO are backstage and discuss facing AJ Styles and Omos at Crown Jewel. Riddle trails on for a bit until Randy shuts him up and has a proposition for tonight. He challenges Omos to a singles match. A very interesting strategy.

GOOD: Round 2 of Night 2 of the draft is underway. The picks are as follows:

GREAT SQUASH: Up next is Shayna Baszler vs Dana Brooke. This was a very good squash for Shayna. Exactly what she needed.

AVERAGE: Post match, Shayna goes to break Dana’s arm like she did to Nia and Eva, but Dana is saved by Doudrop. Shayna takes a shot at Doudrop, who is unphased. I’m interested in a potential Shayna, Piper match.

GOOD: Paul Heyman is backstage with the Usos and revels in the fact that he was able to get them drafted to Smackdown. The interviewer, however, ponders if Heyman’s pull is also the reason why Brock Lesnar is a free agent. The Usos give Heyman a death stare as Paul looks petrified.

AVERAGE: Up next is Mansoor and Mustafa Ali taking on Angel Garza and Humberto Carrillo. This was a decent little match, but nothing too crazy. The finish sees Humberto pull Ali’s face into the turnbuckle, which allowed Angel to pin him for the win.

GOOD: Round 3 of Night 2 of the draft is underway. The picks are as follows:

GREAT: Big E comes out to address the draft. He talks about how for the second consecutive year, the New Day has been split up in the draft. He also talks about defeating Lashley in the steel cage and says he deserves to be WWE champion. Big E looks past The Almighty to the Scottish Psycho Drew McIntyre. He calls out Drew, who obliges. Drew talks about the stipulation where he wasn’t allowed to challenge for the WWE title as long as Lashley was champion and is happy someone was finally able to beat him. Drew, however, puts over Big E as someone who deserves to be WWE champion and has earned his respect. Drew officially challenges Big E for the title. However, the Dirty Dawgs come out to interrupt. Dolph Ziggler wants thank yous for bringing Big E to the main roster in 2013 and Drew back to WWE in 2018. All he wants is a simple thank you, but E and McIntyre would rather fight them instead.

GREAT: Up next we have The Dirty Dawgs taking on Big E and Drew McIntyre. This is once again another really good match. The in ring action on this show has been consistently solid tonight. The finish sees Big E go for the win, but Drew tags himself in and hits the Claymore on Dolph for the win.

GOOD: Post match, Big E hits Roode with the Big Ending and poses with the title with Drew. Big E officially challenges Drew at Crown Jewel with the title on the line.

AVERAGE: Reggie is backstage and tries discussing the draft with Pearce, who ignores him. Reggie is jumped by several wrestlers like the Viking Raiders, R- Truth and Jaxson Ryker. Reggie once again escapes. Drake Maverick shows up on a golf cart to get Reggie but he escapes all the same. Apollo Crews and Commander Azeez show up and say that it’s good to see Reggie again, but he can’t talk. Apollo revels in the change of scenery.

AVERAGE: Kevin Owens comes out to address his move to Raw, but is interrupted by Akira Tozawa. Tozawa welcomes Owens to Raw but tries calling out Keith Lee. Owens responds with a stunner to end a decent segment. Owens definitely seems to be on his way out.

GOOD: Round 4 of Night 2 of the draft is underway. The picks are as follows:

AVERAGE: Nikki A.S.H. and Rhea Ripley defend the Women’s tag team titles against Natalya and Tamina. This was a decent match. The champions retain after Rhea hits the Riptide and puts Nikki on her shoulders for a tag team splash for the win.

GOOD: Round 5 of Night 2 of the draft is underway. The picks are as follows:

GOOD: Goldberg comes out to address his feud with Bobby Lashley. He reiterates that what Lashley did to his son at Summerslam was not a misunderstanding and calls Lashley out. Bobby comes out and keeps saying that it was a misunderstanding and refuses to get in the ring. Lashley says that Goldberg’s claims are character assassination and demands an apology. Bobby challenges Goldberg to a match at crown jewel, under the condition that the match is no holds barred. Goldberg agrees and says that at Crown Jewel he’s dead. Bobby says that you can’t kill the Almighty and says that if his son tries coming to Saudi Arabia, this time what he does to him won’t be a misunderstanding. Cedric Alexander and Shelton Benjamin try to jump Goldberg, but Goldberg gets the better of them to end the segment.

GOOD: Seth Rollins is interviewed backstage about coming to Monday Night Raw and is elated. Kevin Patrick refers to Edge also being drafted to Raw, but Seth doesn’t want him to ruin the party. Seth says he’ll cross that road when he gets to it.

AVERAGE: Up next is The New Day vs the Hurt Business. This was a decent match but nothing too special. New Day wins after Woods hits Cedric with the coast to coast elbow drop.

GOOD: Post match, The Street Profits show up and congratulate New Day on their recent success. However, they say that they’re gonna run the Raw tag team division now and they want the smoke.

AVERAGE: Randy Orton comes out and asks Omos to see if he’ll accept his challenge for a match tonight. Orton calls Omos a big bitch and summons him and AJ. AJ calls Randy insignificant and says that they’ll win the tag titles at Crown Jewel. The two teams begin to fight, ending with Randy RKOing AJ.

GOOD: Round 6 of Night 2 of the draft is underway. The picks are as follows:

GOOD: Finally we have our main event as Charlotte Flair takes on Bianca Belair. Much like on Smackdown, Becky Lynch joins this match on commentary. This was a solid main event, however it was ruined by the DQ finish.

GOOD: Post match, Becky beats up Bianca and Charlotte, but is jumped herself by Sasha as revenge for Smackdown. A good way to end the show.

Overall, this was definitely the weakest episode of Raw in a few weeks, but still a decently good show. There was some good in ring action like the US title match, the tag match and the main event, but the rest of the show was very hit or miss. Some bits were good but most of it was just average and not up to the high standards that Raw set for itself recently. Hopefully that changes with the new roster they have set up.