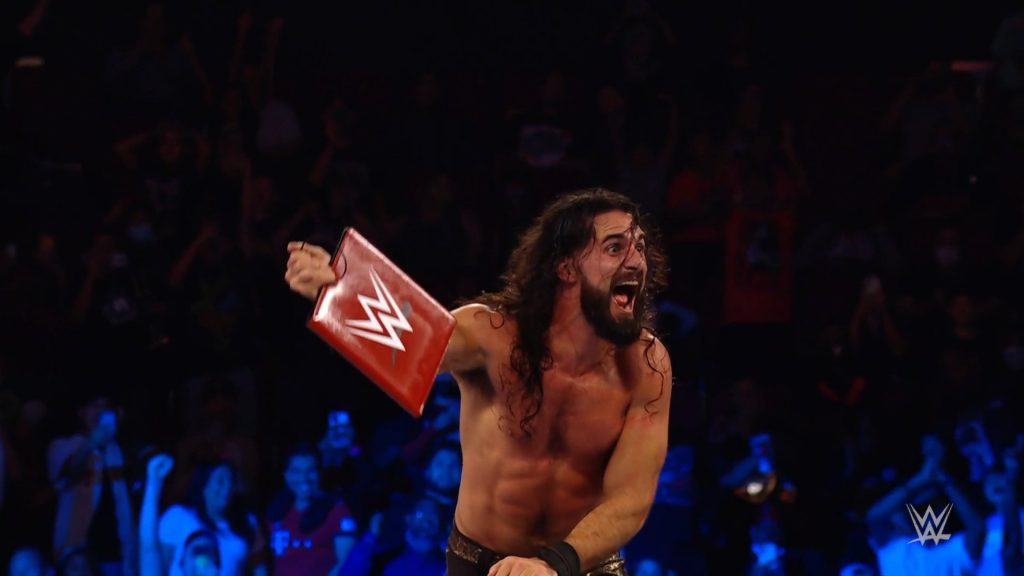 Tonight continues a new era for the WWE. On the heels of an excellent Crown Jewel PPV, the new Raw roster comes into full effect tonight. How will these new additions impact Monday nights? Let’s find out!

GREAT: The show kicks off with the WWE champion Big E. Big E hypes up the show being in Houston and puts over Xavier Woods and Drew McIntyre. Seth Rollins interestingly comes out and challenges Big E for the WWE title. E, however, declines his offer, saying that since he lost to Edge at Crown Jewel, he doesn’t deserve a shot. Rollins coerces him into accepting the match by saying that Roman was too afraid to accept his challenge and says that Big e shouldn’t make the same mistake. Rey Mysterio comes out and makes reference to his feud with Seth and runs down his accolades, saying he’s got an itch to become WWE champion once again. Finn Balor comes out and also runs down his accolades, followed by Kevin Owens who does the same. The four men start fighting until Seth Rollins runs away. Sonya Deville comes out and announces that the main event tonight will be a fatal four way match. But not just any fatal four-way match, a LADDER match. This was a really fun opening segment to start the show. The main event scene of Raw seems immediately stacked and it’s great to see.

GOOD: Up next is a triple threat tag team match as the Street Profits take on The Dirty Dawgs and Alpha Academy. The winners of this match will take on RKBRO for the Raw tag team titles later tonight. There was a really good spot where Otis dragged Dolph into their corner and tagged himself in. Gable hits chaos theory on Dawkins but Montez breaks up the pin by hitting From the Heavens. The finish sees Omos come out and beat down Montez. Angelo goes to check on him, but Omos decks him. This allows the Dirty Dawgs to hit, honestly, a weak looking spinebuster zig-zag combo to get the win. They will now face RKBRO for the tag titles later tonight.

GOOD: Up next is the coronation of Zelina Vega as the new queen. She chastises Mike Rome for not introducing her properly, and wants him to try it again with more of a regal flair. Vega cuts a promo talking about how she’s been overlooked for far too long and that now she has the queen’s crown things are going to change. People are going to respect her finally. However, Doudrop interrupts her which sets up our next match.

AVERAGE: Up next is Doudrop vs Zelina Vega. Doudrop destroys Vega for the first part of this match, until the Queen begins to mount a comeback. Doudrop gains the upper hand until Zelina uses her royal scepter to cheat and picks up the win. A decent match with, honestly, pretty solid booking. Doudrop looked dominant and Zelina cheating works for her character as well as keeps Doudrop strong. Decent stuff.

GREAT: Up next we have the Raw Women’s champion Becky Lynch. Becky puts over her triple threat match at Crown Jewel and looks ahead to the new Raw talent she’s able to face like Rhea Ripley and Liv Morgan. Lynch, however, says that they will all fall and learn like Sasha and Bianca did. Bianca Belair interrupts and says that Bianca wasn’t pinned in the triple threat match. She says that she technically beat Charlotte last week, which means that she is owed another match for the Raw women’s championship. Bianca says that Becky hasn’t faced adversity since coming back, but Becky says that Bianca has gotten a straight shot to the title. Bianka says that Becky is nothing without a title behind her and that infuriates Becky. Bianka challenges Becky one more time for the Raw Women’s championship, but Becky says no. The two begin to fight, with Becky being thrown over the announce table. Becky grabs a kendo stick and goes to swing it at Bianca, but Bianca blocks it. Bianca goes to hit the KOD on Becky, but Lynch reverses it into a Russian leg sweep with the stick and high tails it. Becky, however, ultimately accepts Bianca’s challenge, just not tonight. This was REALLY good stuff here. I’m really digging this feud.

GOOD: Finn Balor has a backstage segment with Kevin Owens. Owens talks about how he and Balor have history together, but Kevin says he has to win this match. Kevin put over the fact that the ladder match is every man for himself, which works for Finn just fine.

AVERAGE: Up next is Damian Priest vs T-Bar. This was honestly, for what it was, a REALLY enjoyable short match. This is easily the best T-Bar has looked since coming to the main roster. However, the match ends abruptly when T-Bar throws one of the commentator’s chairs at Priest to cause the DQ.

GOOD: Post match, Priest absolutely obliterates T-Bar in a very tense beat down. This came across as almost heelish for Priest. Could a heel turn be coming?

AVERAGE: Carmella cuts a backstage promo talking about being the Diamond of WWE and the importance of wearing her mask. This was decent but whatever.

AVERAGE: Up next we have Carmella vs Liv Morgan. This was another decent match on the show, but definitely the weakest match so far. Carmella eventually picks up the win.

GOOD SQUASH: Up next is Keith Lee vs Cedric Alexander. This was a good showcase for Lee. Post match, Shelton Benjamin has a quick stare down with Lee, showing a semblance of potential interest in the Bearcat.

AVERAGE: The Mysterios are backstage when they’re interrupted by Austin Theory. Theory marks out to Rey and wants a selfie with him. He asks Dominik to take the picture, which offends Dominik and sets up our next match.

GOOD: Up Next is Dominik Mysterio vs Austin Theory. There was a fun spot towards the beginning where theory mocks Eddie Guerrero. Otherwise, this match was fairly standard. Theory eventually wins after hitting the ATL. Great to see Austin get another win. His booking has been very consistent and solid so far since coming back to Raw.

AVERAGE: RKBRO are backstage and Riddle talks about potential Halloween costumes. Randy says they’ll focus on Halloween later and they should focus on the Dirty Dawgs first.

GOOD: Up next is the Raw tag team championship match as RKBRO defend against the Dirty Dawgs. This was another really fun match on this show. The finishing sequence was fun which saw Riddle roll up Ziggler for the win.

GREAT: Seth Rollins is interviewed backstage about having a target on his back in the ladder match tonight. Rollins talks about being the visionary and that tonight he will be one step closer to getting back the WWE championship. Rollins’ slip into madness has been absolutely fantastic and this segment was no exception.

MUST WATCH: Finally we have the fatal four way ladder match Kevin Owens takes on Seth Rollins, Rey Mysterio and Finn Balor where the winner gets a future WWE title shot. This match was as incredible as you would expect it to be. The finish sees Seth Rollins power bomb Owens to the outside through a ladder. He then hits the stomp on Finn and climbs the ladder to secure the contract and win. Post match, Big E comes out to confront Seth.

Result: Seth wins after climbing the ladder and retrieving the contract

GOOD: The show ends with a quick post match interview with Seth Rollins. Rollins basically says that he is going to become the new WWE champion.

This show was definitely a huge step in the right direction for Monday Night Raw. Lots of great segments like the opener and the Bianca/ Becky promo and the main event was an absolute banger. Easily the best WWE tv match in a long time. The middle of the show was a bit hit or miss but there was still a lot of good stuff like Priest and T-Bar having a potential feud and Keith Lee being showcased. While not as good overall as some of the better Raws recently, this was certainly an improvement over the last several weeks.