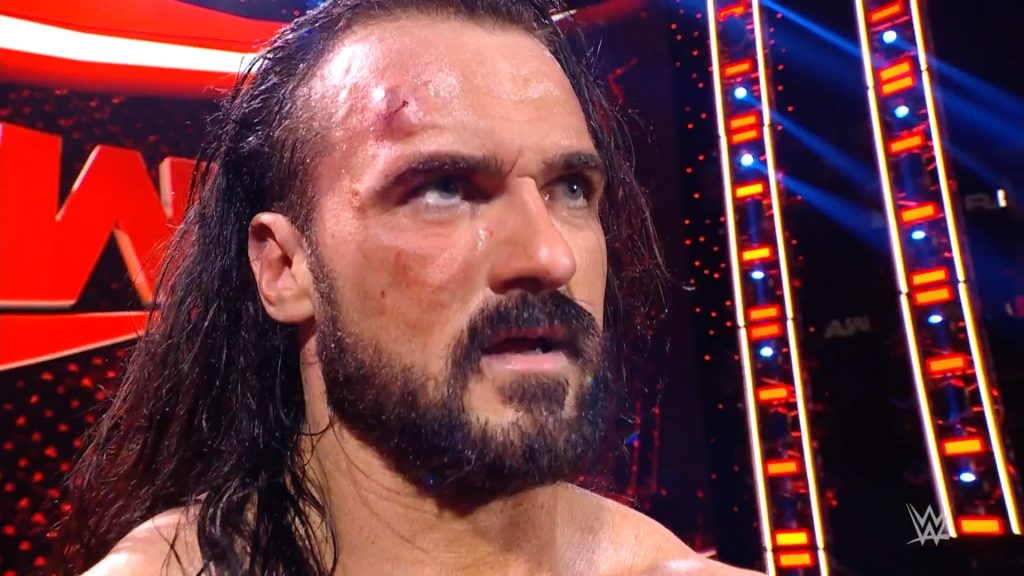 Last week’s episode of Monday Night Raw, while not as good as previous weeks, was still a fairly enjoyable show. The aftermath of the WWE draft provided some very interesting roster changes for the red brand that will make the show intriguing post Crown Jewel. But as for the road to Saudi, can Raw continue their momentum heading into the ending of this chapter? Let’s find out!

GREAT: The show kicks off with Drew McIntyre and hypes up the Crown Jewel PPV, mainly his WWE title match against Big E. He emphasizes that this is his last chance to win the title before moving to Smackdown. Big E interrupts and talks about how he’s had a highly eventful 48 hours and relishes in the perks of being champ. He puts over Drew as a specimen, but he’s not gonna beat him for the title at Crown Jewel. Drew talks about his run as WWE champion and talks about all the people he’s run through. Big E will be no exception. Interestingly, the Usos show up even though they have NO reason to be on Raw whatsoever. They begin to stir the pot between Drew and Big E, but they simply ask why they’re even on Raw. Their explanation? They can do what they want because they’re associated with Roman. They bicker until a challenge is laid down for later tonight. It’ll be Drew and Big E taking on the Usos. The Usos end the segment by superkicking both men.

AVERAGE: Kevin Patrick is backstage with Xavier woods and Kofi Kingston. She asked them about the possibility of them facing each other in the semi finals of the king of the ring tournament. However, the New Day just laughs it off as Xavier heads to his match.

GREAT: Up next is a first round match in the KOTR tournament as Xavier Woods takes on Ricochet. Ricochet has a decent pre match promo saying that winning the tournament would propel his career into the stratosphere and everyone should get used to calling him King Ricochet.  This was a damn good match to start off the show with. Xavier wins after hitting the elbow drop and moves on to get closer to his destiny.

AVERAGE: RKBRO is backstage as Riddle tells Randy he has news. He says that he challenged Omos to a singles match tonight because he wants to follow Randy’s plan. Orton, however, says there is no plan to mess with AJ Styles and Omos. He tells Riddle that tonight, he’s on his own. Riddle, being himself, thinks that Randy is lying and that there is still a plan. A decent segment between RKBRO.

AVERAGE SQUASH: Up next is a tag team match as Mustafa Ali and Mansoor take on Shelton Benjamin and Cedric Alexander. This was a short, decent showcase for Cedric and Shelton. Very happy they won. Post match, Mustafa and Mansoor have a quick spat as Ali pushes Mansoor down, saying he’s “sick of this.” Could dissension already be brewing between the two?

GOOD SQUASH: Up next is a Queen’s Crown Tournament first round match up as Shayna Baszler takes on Dana Brooke. This was another good showcase for Shayna. A dominant performance for her, but I’d like some of these women’s matches to get some more time.

AVERAGE: Charlotte Flair cuts a backstage promo on everyone in the tag match later tonight. She runs down Becky, Charlotte and Bianca in what was honestly a fairly standard Charlotte promo.

AVERAGE: Riddle cuts a promo on Omos putting him over to “distract” him so Randy can jump him as a part of “the plan.” However, like Randy said earlier, there is no plan. Randy never comes out. AJ gets on the mic and tells Riddle to stop stalling. He tells the ref to ring the bell and the match gets underway.

AVERAGE SQUASH: Immediately after, Riddle takes on Omos. This was pretty much all Omos for the entirety. AJ gets on the mic and tells Omos to hit a roundhouse kick. Omos delivers in a BIG way with a vicious kick. AJ plays the replay of it several times before Omos puts him away. This was alright but went on a bit too long.

GOOD: Backstage, Drew McIntyre confronts Big E about what happened earlier tonight and blames him for what happened. The two argue before coming to their senses and agree to coexist in their tag match later tonight. They solidify it by doing a fun Mega Powers-esque handshake. Not a big fan of the whole “can they coexist” angle but this was a good enough segment to solidify that.

GOOD: Bobby Lashley is in the ring and discusses why he challenged Goldberg to a no holds barred match at Crown Jewel. He says that Goldberg talks about being a father, but he sees him as nothing more than a washed up hall of famer that he wants to end. This was a good promo from Lashley and honestly I’ve enjoyed this feud quite a bit.

GOOD: Sasha Banks has a backstage promo where she too talks about having to coexist with Bianca Belair. She puts herself over as the standard and the blueprint and commands the spotlight. She finishes by telling Bianca to follow her lead later tonight. A good promo from Sasha.

AVERAGE: Up next is Jeff Hardy vs Austin Theory. This was a decent match until Reggie and the 24/7 division oddly decided to hijack the match for a minute. They leave, as Jeff hits the twist of fate and goes for the Swanton bomb. However, Theory moves out of the way and rolls up Jeff for the win with a handful of tights. Not the best redebut for Theory but a decent showing nonetheless.

GOOD: Bianca Belair cuts a promo saying that Sasha needs to stay in line considering she beat her at Wrestlemania. She also says that it’ll take her 30 seconds to turn Becky2belts into Becky No Belts. Bianca is presented here as someone who is ready to take on all challengers and it’s really nice to see.

GOOD: Up next is Jinder Mahal vs Kofi Kingston in another KOTR first round match. This was a good enough match between these two. The finish sees Xavier fight Veer and Shanky on the outside. Jinder goes to pin Kofi with his feet on the ropes, but he kicks out. Kofi goes for a top rope move, but Mahal reverses into the Khallas for the win.

GOOD: Becky Lynch cuts one final promo before the big tag match. She says that teaming with Charlotte is like finding smelling piss in a back alley which is hilarious. She finishes by saying she’s going to leave Crown Jewel the same way she went in, as Smackdown Women’s champion.

AVERAGE: Up next is the big women’s tag match as Charlotte Flair teams up with Becky Lynch to take on Bianca Belair and Sasha Banks. The four have a good back and forth before they all get counted out due to brawling. Sonya Deville and Adam Pearce come out and say that it’s not gonna end that way and order the match to continue. The match continues at a good pace until the match is thrown out once again due to Bianca throwing Sasha into the turnbuckle. Ok then. Post match Becky and Sasha brawl until Becky hits the Manhandle Slam to end the segment. A good enough match ruined by two terrible finishes.

AVERAGE: The Usos are backstage and they get a call from Roman. Roman tells them to get the job done tonight. A decent, short segment.

AVERAGE: Up next is another first round match in the Queen’s Crown tournament as Natalya takes on Doudrop. This was another decent match, but again, way too short.

AVERAGE: Backstage, John Morrison is meditating when he’s interrupted by the women’s tag champions Rhea Ripley and Nikki A.S.H. They try talking to him but he tells them not to break his zen. This was another decent segment.

GOOD: Mansoor is backstage and talks about the dissension with Mustafa Ali. He says he’s going to talk to Mustafa, but he shows up instead to berate him. He says he’s Mansoor’s lifeline and that he’s the only thing that’s been keeping him from being a failure. Mustafa proceeds to attack Mansoor, ending their partnership. I smell a Crown Jewel match for Mansoor being the only explanation for this turn.

GOOD: Finally, we have the main event as Big E and Drew McIntyre take on The Usos. This was a really fun main event. However, much like other matches on this show, it was hurt by the finish. Big E and Drew eventually come to blows, resulting in them being counted out. Another solid match ruined by a bad finish.

AVERAGE:: Post match, the Usos attack Drew and Big E. They beat them down until the faces rally back. Big E takes out one of the Usos in the ring but turns around to get hit with the Claymore from Drew. A good enough way to end the show.

Overall, this was definitely the worst Raw in several weeks. A lot of mediocre backstage segments and average in ring action. Most of the matches were either too short to amount to anything or were good matches plagued by bad finishes. The biggest highlight of the show was Xavier vs Ricochet who had a very fun opening match. Not a bad show, but almost completely skippable.