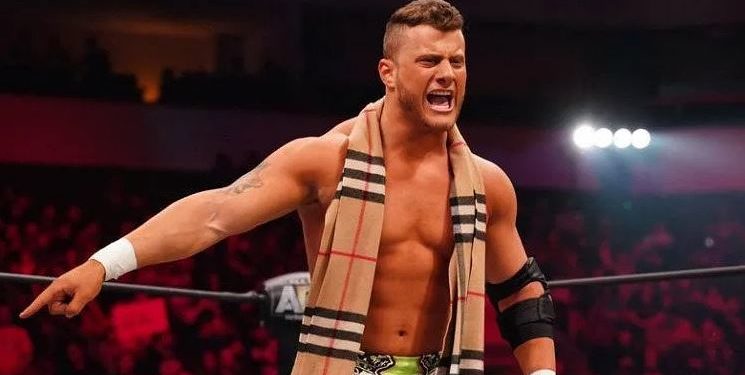 MJF has been hyping up the great bidding war of 2024 to sign him when his contract expires, but he won’t go to New Japan.

MJF recently returned to AEW at All Out by winning the Casino Battle royale with the help of Stokely Hathaway and The Firm. By winning the match MJF now has a guaranteed title shot for the AEW World Championship at a time of his choosing.

However, he has made it clear that his winning the title will only be a bargaining chip for his favor from other companies. MJF has been talking about the ‘bidding war of 2024’ which he claims will take place when his AEW contract expired in 2024.

He’s willing to go to any company that offers him the biggest contract, except for New Japan Pro Wrestling. While speaking on The MMA Hour, MJF told Ariel Helwani why he wasn’t interested in the eastern-based promotion.

“I’m just saying that I saw what a lot of top guys were making all across the board, except I don’t pay attention to New Japan,” MJF said. “It’s a garbage promotion, dogsh*t, and the fact that people still talk about it like it’s a thing is hilarious to me, whatever. Kazuchika Okada No. 2? Is that what was in PWI 500? I don’t think I’ve heard that guy’s name since 2014. Who gives a sh*t?” (H/T WrestlingInc.com)

What is MJF Doing Now?

As of his return, MJF is on a mission to seize the top prize in AEW as his means to knab the best deal after AEW. He entered into a new feud with Jon Moxley a couple of weeks ago, and now Moxley has the gold.

MJF watched his foe win his 3rd AEW Championship on Dynamite Grand Slam this past week against Bryan Danielson. MJF, ready to go to war, unveiled his new faction last week ‘The Firm,’ led by Stokely Hathaway, designed to protect his interests.

Moxley and MJF will likely collide for the AEW Championship at Full Gear. For now, it looks like their groups are already beefing, with W. Morrisey attacking Wheeler Yuta this week.