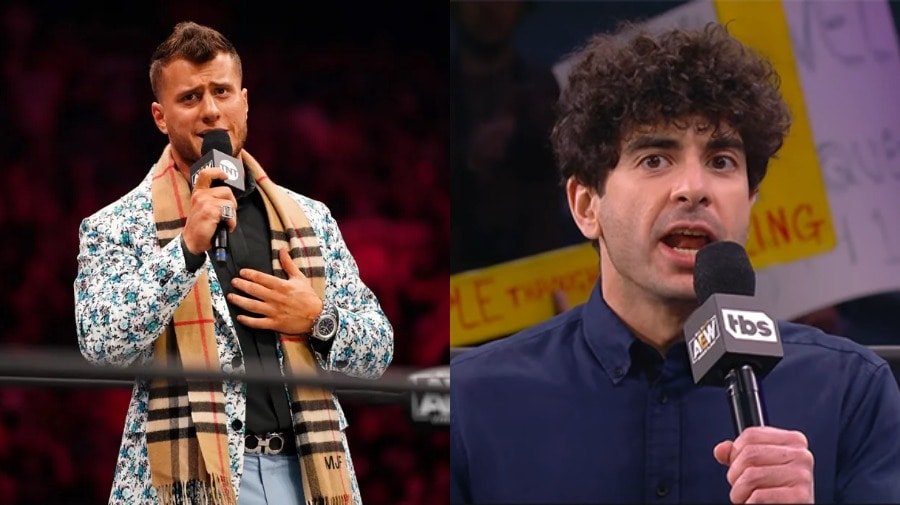 MJF explains that the reason he no-showed a meet and greet the weekend of AEW Double or Nothing was because of his dispute with Tony Khan.

Since returning to AEW in early September, MJF has quickly reestablished himself as the top heel in wrestling. This comes months after his now infamous walk-out following AEW’s Double or Nothing pay-per-view.

At the time, MJF was feuding with his former bodyguard Wardlow over the latter’s employment to the heel. Unfortunately, it was reported in the days leading up to the event that there was tension between MJF and Tony Khan.

Said tension stemmed from MJF feeling undervalued compared to the WWE releases Khan brought in, despite MJF’s workload. The dispute over pay resulted in MJF nearly no-showing Double or Nothing.

Fortunately, he did show up and swiftly lost to Wardlow in the show’s opening match. MJF’s final appearance occurred the following Dynamite where he cut a heated promo demanding to be fired.

MJF hasn’t spoken much about the conflict that resulted in the hiatus, but he recently interviewed with Sam Roberts. In the interview he mentioned his walking out before Double or Nothing regarding a particular meet and greet.

“My company lost $10,000 that day, and I say my company because they are employing me. For the time being. I did not go because my boss, at that time, was being a f*cking mark. If you don’t want to pay me what I’m worth, daddy does not show up to work. Daddy got the money. Daddy is back. Now me and Tony Khan are best friends. Tony Khan, great guy,” said MJF.

The interview then took a dark turn in which MJF spoke about a wellness check being sent to his hotel. This came following MJF’s no-showing the meet and greet.

“When I stayed in said hotel room, they did a wellness check on me and the AEW security, this is a very true story, tried to break my door down. At the time, I had already left. They did the check, he literally went to kick my door down on a wellness check. That was everybody’s fear. ‘Is this MJF’s Brian Pillman moment?’ No, it was MJF trying to make what MJF deserves to be making. I have understood that there are some people who were really let down or offended. What I say to you is, I don’t care, get over it. I’m happy now. If you’re a fan of mine, you should be happy too because I’m stupid. I was rich before, but now I’m so rich I don’t even know what to do. If you want the fans to see me and experience me on any level, pay me what I’m worth. He did, and we’re cool.” (H/T Fightful.com)

How Is MJF Doing Now

Things have only seemed to get better for MJF following his return to AEW. He currently has a guaranteed title shot for the AEW World Championship in the form of a poker chip.

He started a feud with Jon Moxley upon his return to Dynamite and his foe is the current champion. He has also entered into conflict against Moxley’s group the Blackpool Combat Club and faced Wheeler Yuta last week.

The two will likely have their match at Full Gear where MJF hopes to begin his first title reign in AEW.