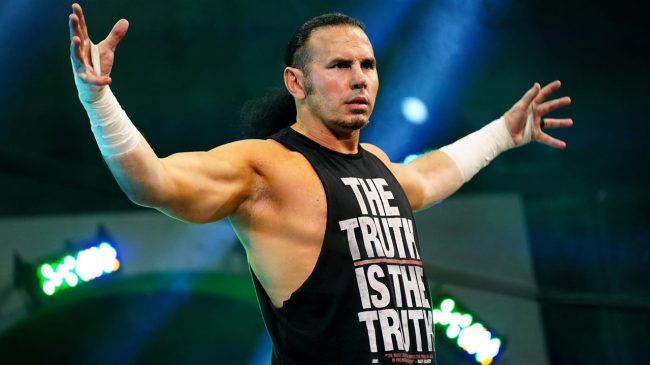 AEW wrestler and former WWE Team Extreme member Matt Hardy believes that Vince McMahon won’t hold back for long. Involvment with the creative side of the company is something Hardy feels McMahon wont be able help himself from doing.

Recently on his podcast “Extreme Life of Matt Hardy“, the wrestling veteran shared some of his thoughts and what might inevitably end up happening. When asked about McMahon, Hardy said that he didn’t plan on involving himself in the creative structure of content creation.

Hardy described how he thinks McMahon won’t be able to help himself. Noting that Vince McMahon’s influence on the product will likely slowly increase over time.

Podcast Co-host Jon Alba brought up how legal hurdles could prevent McMahon from out right taking over control of creative again. However Hardy responded by explaining how it would likely be a slow process and take time.

The wrestler referenced his history working with McMahon, noting that he has a fairly good understanding of his former boss. Hardy was sure to emphasize that he believes McMahon would want to regain creative control eventually.

His Need For Control Isn’t His Fault

Giving McMahon the benefit of the doubt, Hardy feels Vince’s need for control is just part of who he is. “I feel like even if Vince is being sincere about that, he won’t be able to control himself like that. If he is back, he is going to put his fingerprints on things. It’s just who he is. It’s absolutely who it is,”

Citing a WWE talent, Matt Hardy said that he was told the January 9 episode of WWE Raw felt “different”. After the announcement of McMahon’s return it was said it felt like Vince had his fingerprints on it.

What’s Been Happening With WWE

Stephanie McMahon announced her resignation as WWE co-CEO and chairwoman on January 10. The news continued when Vince McMahon was unanimously elected the Executive Chairman of the Board same day.

Both of these changes came just days after Vince announced his planned return to the company. McMahon stepped down and retired in July 2022 as the result of a WWE board investigation into misconduct allegations.

Ahead of his return, McMahon released a statement detailing his intention upon his return. His primary intentions are to participate in negotiations for media rights deals and to be involved in future strategic ventures.

It was also announced this week a class action lawsuit has been filed against McMahon and is being sued by a WWE shareholder. Keep an eye on WrestlingRepublic.com to follow this story as it unfolds.