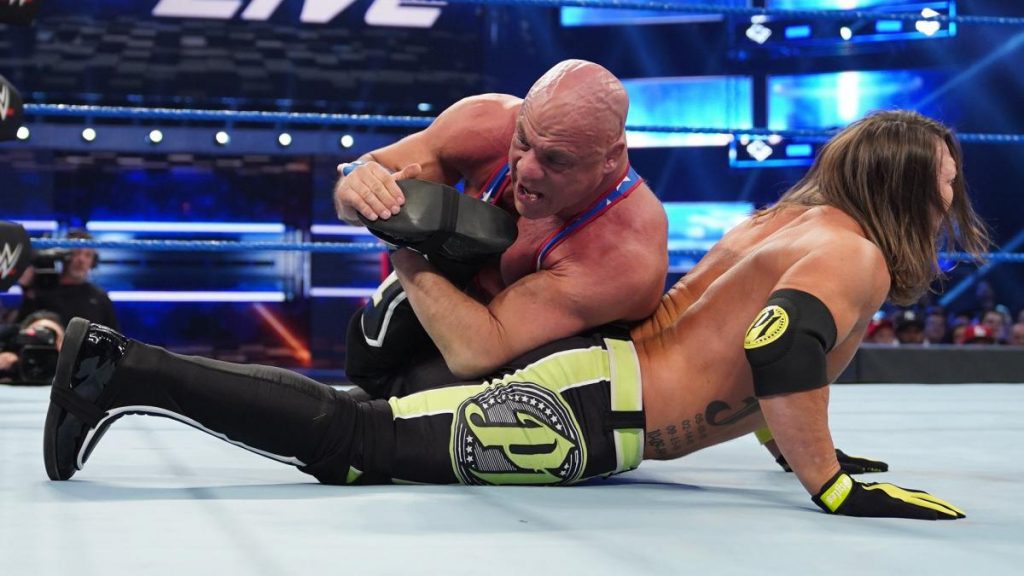 Both Kurt Angle and AJ Styles are undeniably amazing competitors whether it’s on the mic or inside the ring. The two faced each other numerous times back in TNA and they also had an encounter in WWE.

The march occurred on the March 26th 2019 episode of Smackdown on the road to Wrestlemania 35 where Styles was scheduled to face Randy Orton.

The match between the Olympic Gold Medalist and The Phenomenal One only lasted 3 minutes due to an intervention from The Viper.

Recently on the Kurt Angle Show, Angle claimed how disappointed he was with this match:

“The thing was, I requested this match to Vince McMahon. I had the Kurt Angle farewell tour and they allowed me to request certain matches, and I requested AJ Styles and Samoa Joe over any other WWE wrestler and I made sure I got those two. AJ and I went out there, it was three minutes and we kicked a** for three minutes. But what’re you going to do? There was no finish and it just kind of sucked. Unfortunately for AJ and I, it wasn’t the finish that we wanted. Not the way I wanted to end my career, and Randy Orton did not get up for me on the Angle Slam. This match was so embarrassing, it showed no traces of the real me. It was like the old beat-up Kurt Angle with the quad injury, no finish, it was just horrible.” (H/T Ringside News)

Kurt Angle then went on to lose to Baron Corbin in his farewell match at the same Wrestlemania.