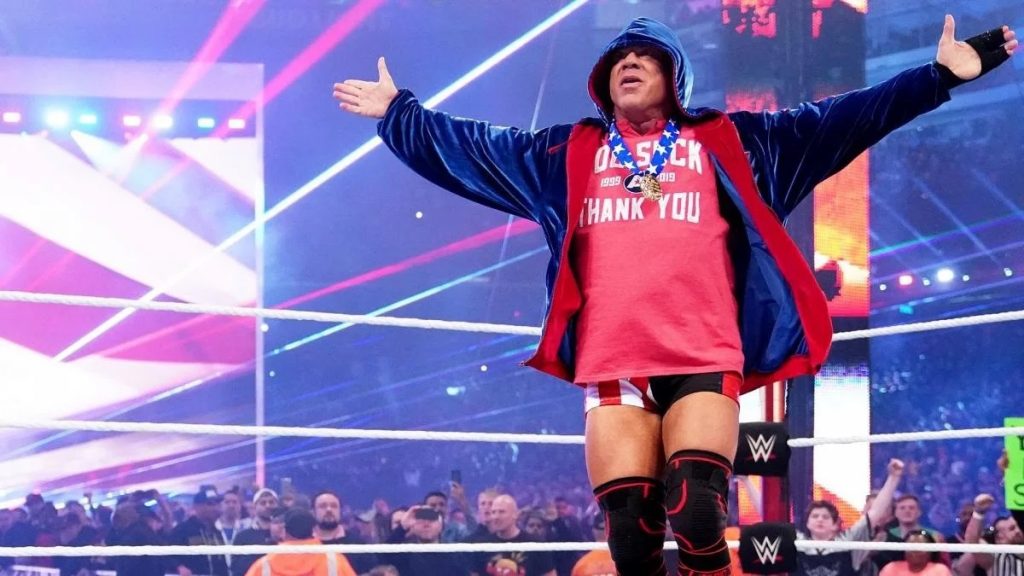 During a recent episode of the Kurt Angle Show, Angle discussed his reasoning behind exiting WWE in 2006, which included him pulling down his pants in front of Vince McMahon during one of the company’s production meetings.

“The hardest part was the injuries, I just couldn’t keep myself together,” Angle said. “That’s the main reason I even left WWE in 2006, I just couldn’t keep my body together. My hamstring, my groin, my abdominal, my shoulder, my neck, I was falling apart and I was having a really difficult time and the painkiller issue wasn’t getting any better. I said before I started lashing out at Vince, Vince was ignoring me which made me even more angrier and I would leave him threatening messages on his answering machine on his cellphone. It just got so far out of control that eventually I had to go to Vince and say we need to have a talk.”

“I just came from an event and I went to a meeting and I pulled my pants down, it was a production meeting Vince was in the front and everybody else was in the back, I walked in between them and pulled my pants down to my ankles and I showed Vince my groin. It was all black and blue, I mean my p*nis, everything was black from the injury. It was an abdominal tear, a groin tear and a hamstring tear, all three in the same time and all the blood just rushed to my leg and my groin.”

“I said ‘We need to talk,’ Angle said. “[Vince said] ‘Well let’s go in my office,’ I said ‘No, I need to meet you up at the headquarters this week, I want you to set me up a flight and bring me up because we need to have a personal discussion about what’s going on.’ That’s when I decided I was mostly likely going to leave the company.”

Kurt Angle was released from WWE last April during a day known as ‘Black Wednesday’ among wrestling fans. Despite teasing a return prior to AEW’s Revolution pay-per-view, the Olympic Gold Medalist revealed that he doesn’t plan on returning to the ring during an interview with the ‘Two Men Power Trip’ podcast.

Special thanks to WrestlingInc and 411Mania for the transcriptions.