Jon Moxley defends the AEW Title, Swerve Strickland in a handicap Match, and More Announced For 7/27 AEW Dynamite Fight For The Fallen 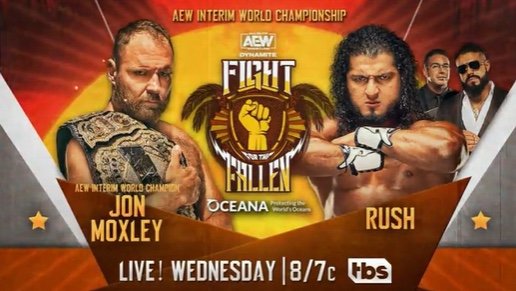 Multiple matches were added to AEW Dynamite Fight for the Fallen.

During ROH Death Before Dishonor, it was announced that Interim AEW World Champion Jon Moxley would defend his AEW Championship against RUSH on the July 27 episode of AEW Dynamite Fight For The Fallen.

RUSH is coming off a victory over Dragon Lee at ROH Death Before Dishonor. Rush overall has a ten-match winning streak throughout AEW, ROH, and Mexico.

Swerve Strickland face Tony Nese & “Smart” Mark Sterling in a handicap match. Sterling has been trying to get people to sign a petition to get Swerve off the AEW roster.. Swerve is one-half of the AEW Tag Team Champions alongside Keith Lee.

During the AEW SDCC panel, Bryan Danielson announced that he is cleared to wrestle and will make his return to the ring on Wednesday when he takes on Daniel Garcia. Danielson has been out of action since getting injured during the Anarchy in the Arena match at Double Or Nothing in May.

AEW Dynamite Fight For The Fallen (7/27)