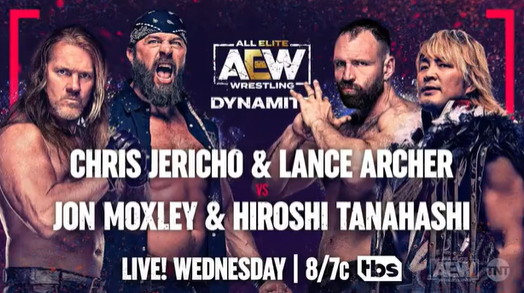 Jon Moxley will team up with Hiroshi Tanahashi in the go-home AEW Dynamite match for the Forbidden Door pay-per-view match against Chris Jericho and Lance Archer.

At the Forbidden Door pay-per-view on Sunday, Moxley and Tanahashi will compete for the temporary AEW World title.

This past Wednesday, during Moxley and Tanahashi’s face-to-face, Jericho and the Jericho Appreciation Society interrupted and jumped both of them, finally being joined by Archer and Desperado of Suzuki-gun.

This match joins the already announced trios contest between Orange Cassidy & Roppongi Vice vs. Will Ospreay & Aussie Open of United Empire. At the PPV, Cassidy and Ospreay will also face off.

Penta Oscuro vs. Malakai Black for a spot in the four-way inaugural AEW