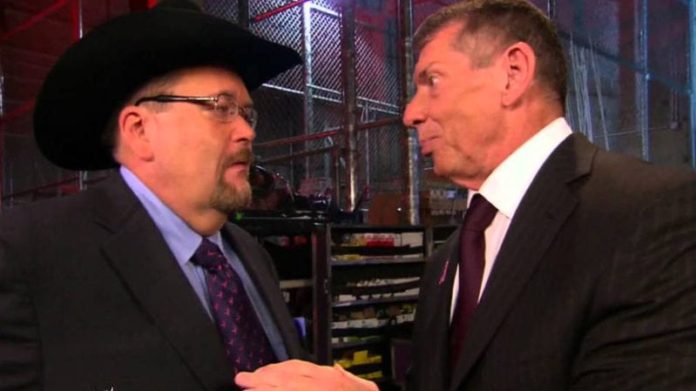 On the newest edition of Jim Ross’s Grilling JR podcast, he discussed Mick Foley’s WWE career, and during the conversation, he disclosed the genesis of a famous Vince McMahon remark. The former WWE commentator was referring to a June 1997 interview with the WWE Hall Of Famer.

“We didn’t know Vince was even going to be there, we had no idea, That’s where the famous line that came from Vince, where we got to a certain stopping point and heard this voice and it’s unmistakably Vince saying ‘This is good s–t.’ At that point, Mick is made. He just sold the old man. I don’t know what his thoughts would be if you asked him today”

“But at that time, he had turned the corner. He got the blessing of the most powerful man in all of pro wrestling. Vince being there was a surprise, a pleasant surprise. When we were done, he was ecstatic. That was a big deal, that was a real big deal.” (Thank You WrestlingInc for the transcription)

Ross discussed Foley’s extreme approach, claiming that he and Vince had several discussions with Foley about slowing down his approach, but that nothing had changed. Foley will be remembered as one of the greatest risk-takers in the history of the wrestling business, according to the current AEW announcer. Foley has been feeling some barbed wires into his head, stuffed with thumbtacks, received many chair shots to the skull, and tossed over the top of the Hell in a Cell

Mick Foley’s madness can’t be doubted. This made Vince Mcmahon say his very famous line and people still do it to give him some tributes. You can also check out Mick Foley’s documentary on A&E Network.