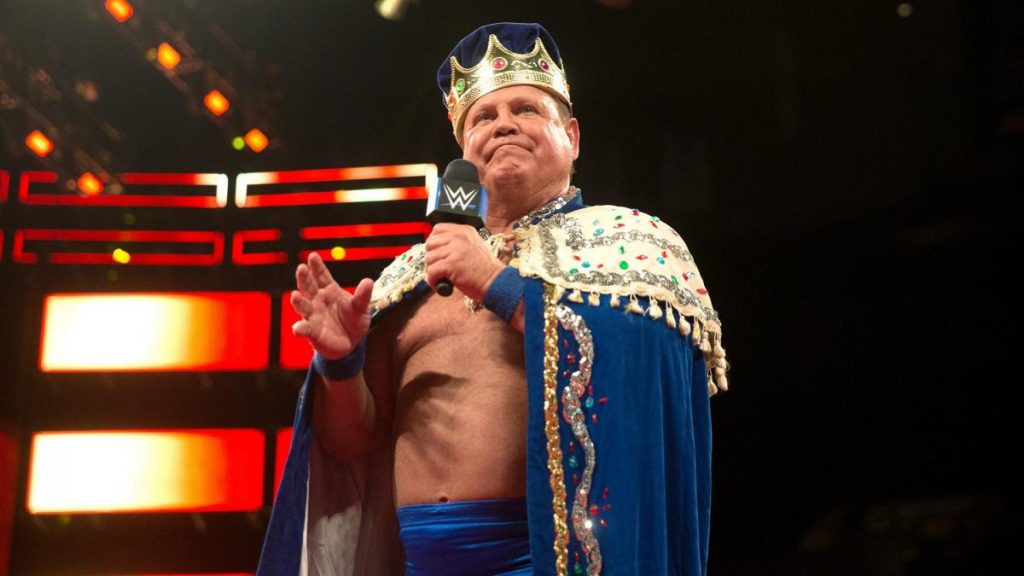 Throughout his career, Jerry “The King” Lawler has had many matches with many unique opponents, however a potential match in 1977, would have pit the “King of Wrestling” against the “King of Rock and Roll”.

The WWE Hall of Famer, was apart of the latest episode of “Stories with Brisco and Bradshaw”, in which Lawler would discuss moments throughout his time as an in-ring performer. In which Lawler would bring up the time he tried to pitch a possible wrestling match against iconic singer…Elvis Presley.

Lawler would discuss the initial pitch for the match against Presley:

“Elvis was known as the King of Rock and Roll. I was known as the King of Wrestling. As a matter of fact, in 1977, I had this manager named Mickey Poole. This was after Sam Bass got killed in the car accident in ‘76. We actually hired him (Poole) to drive me on the trips. I just hated to drive. When Sam was there, Sam would always drive to Louisville and Evansville and I would sit on the side and read comic books. We hired this guy named Mickey Poole, who it was like he wasn’t exactly right, maybe just a little bit off. Anyway, he was a good driver. Anyway, we were driving to Louisville, and an Elvis Presley song came on. The news was out then that Elvis was doing this martial arts stuff with Kang Rhee who was a famous karate instructor down in Memphis. I said to Mickey, ‘You know what would be cool is if we could somehow get a hold of Elvis Presley and do a wrestler vs karate match’, because they already did the Muhammad Ali and Inoki match.”

Then, Lawler discuss the plan to contact Presley about the match:

“Just crazily, out of the blue, he said, ‘Well you know what? I’ll tell my brother to ask him if he would want to do that?’ I said, ‘What do you mean, you’ll tell your brother?’ He said, ‘My brother is the president of the Elvis International Fan Club and has been for 7 years. He hangs out at Graceland at the front with Elvis’ uncle Vester.’ I didn’t even believe him, and I said, ‘Yea, get your brother to ask him if you would.’ Two days later we’re driving somewhere else and he said, ‘By the way, my brother talked to Elvis’ dad, Vernon Presley. Vernon asked Elvis if he would be interested, and they loved the idea so Vernon Presley is going to call you. I gave him your number. I said, ‘Are you serious?’ He said, ‘I swear.’ Mickey was known for being a goofball and I still didn’t believe him.”

Lawler then mentioned his reaction to hearing back from Presley’s father:

“It was on a Wednesday and I left about 1 o’clock to go to Evansville, IN and this was before cell phone days. I was married at the time living in Hendersonville. I got back that night and my wife said, ‘Somebody called you this afternoon. His name was Vernon Presley.’ I said, ‘Are you serious?’ She said, ‘Yes. He said he’ll call back tomorrow.’ The next day, I waited by the phone. No call. So, I went to the town and wrestled. I got back that night, and my wife said, ‘Well, that Vernon Presley called again.’ I said, ‘What did he sound like?’ She said, ‘He sounds like a real nice, real southern accent guy, and I told him to call you in the morning and he said he would.’ Sure enough, the next morning the phone rang, I picked it up. ‘Jerry, this is Elvis’ father, Vernon Presley. They got through to us with the idea of you and Elvis doing something at the Mid-South Coliseum and Elvis loves the idea.’”

Finally, Lawler brought up the reason for the match not taking place:

“I’ll never forget how he said this. He said, ‘I’ll be honest with you Jerry. Elvis is not in too good a shape right now, but he’s fixing to start working out. He’s got this tour coming up next month. He’s going to work out for that, and as soon as he gets back from the tour, we’ll get in touch with you and we’ll put this thing together’, and then of course, he died before he even did the tour.”

We may never know who would emerge from this potential match as the victor as well as the one and true…. King.