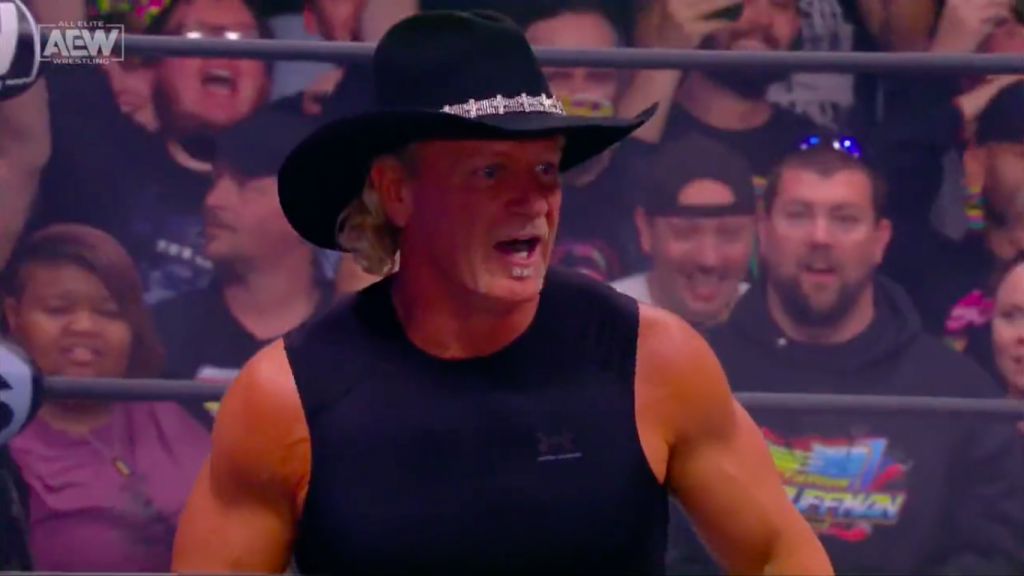 Much to the wrestling legend’s chagrin, Jeff Jarrett admitted that Darby Allin is his son Kody’s favorite wrestler.

WWE and TNA Hall of Famer Jeff Jarrett recently returned for his first match since Ric Flairs Last Match. At AEW Full Gear, Jeff Jarrett and Jay Lethal squared off against the team of Darby Allin and Sting.

The heels ultimately lost the bout, and as of yet, there is no indication that their feud will continue going forward. However, despite his beef with Allin and Sting potentially being over, Jeff Jarrett still has harsh feelings for the painted wrestler.

His ill perception mainly stems from his son, Kody, and his personal preference for his favorite wrestler.

Who is Kody Jarrett’s Favorite Wrestler?

While speaking on the My World Podcast about his weekend, things got awkward when he recounted a conversation with his son.

“Get off the flight in Atlanta. We connected. Literally, we’re walking off the gate and walking down, because Sunday afternoons are busy. Ran into ol’ Doc Gallows (Luke Gallows in WWE). I told Kody as we were walking to our gate to the next flight, I said, ‘Buddy, you have had a weekend.’ He just grinned from ear to ear and said, ‘You know, Darby’s my favorite wrestler.’ Doesn’t make me happy.” (H/T WrestlingNews.com)

That didn’t sit well with Jeff Jarrett considering he had lost to Darby Allin in his first AEW match. However, there’s not much he can do about his son’s personal preferences on who he likes in the wrestling industry.

Now that his business with Allin and Sting is done (maybe), fans wait to see where Jeff Jarrett goes next. Other than being an in-ring talent, Jeff Jarrett signed with AEW last month as the company’s Director of Business Development.