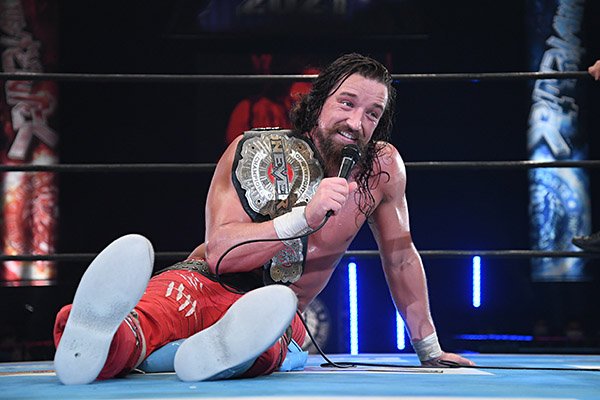 A new NEVER Openweight Champion was crown last night at Wrestling Dontaku 2021 after a perfect storytelling match between Jay White and Hiroshi Tanahashi. Jay White won his first NEVER Openweight Title after he delivered a brutal Blade Runner to won the match, beating Tanahashi who previously held the title for 93 days, making one successful defense against Great O’Khan.

Jay White told the crowd that he’s the real belt collector. White said that anybody who wants to dispute that statement needs to face him, meaning that he took a shot at Kenny Omega’s belt collector gimmick.

In the post match segment, Jay White issued a challenge to his old friend, David Finlay. Both of them fought at each other before at the New Japan Cup 2021 where David Finlay shockingly defeated Jay White to advanced to the semifinal of the tournament. David Finlay & Jay White were once young lion students at New Japan Dojo. They trained with the veterans to become big like right now.

David Finlay is currently competing in the US for Impact Wrestling. Finlay is one half of the Impact Tag Team Champion with his best friend, Juice Robinson. Finlay & Juice have recently retained their titles after defeating The Good Brothers, Gallows & Anderson at Impact Rebellion 2021.