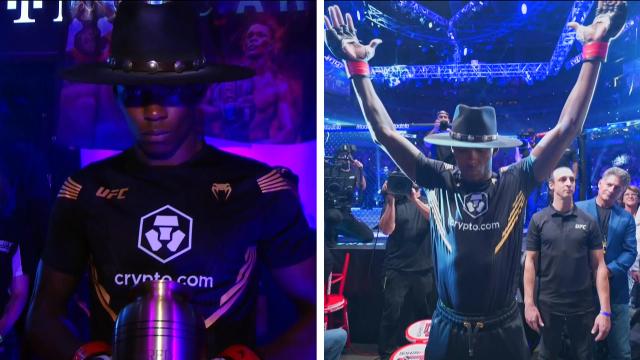 UFC Middleweight Champion Israel Adesanya has made an entrance inspired by The Undertaker, infront of Vince McMahon and Family.

Prior to the main event, the cameras panned to the celebrities in the audience, which featured Vince McMahon, Stephanie McMahon, Triple H and Pat McAfee.

UFC 276 was taking place just minutes away from the MGM Grand Garden Arena, the site where Money In The Bank was being held, so they were able to make it just in time for the main event. McAfee was wearing a brace to sell an attack from Happy Corbin as Money In The Bank went off air.

Israel Adesanya walked out to the octagon playing undertakers entrance music, donning a black hat, similar to The Undertaker, and an urn with his opponents name on it, Jared.

You can find a video of his entrance below;

Israel Adesanya showed out in the presence of the McMahons, winning the fight by Unanimous Decision, defeating the #2 ranked middleweight, “Tha Killa Gorilla” Jared Cannonier.

When asked about his elaborate entrance, Adesanya had this to say;

“It just works, I don’t know, I’m an artist. I didn’t plan on Vince and Triple H and them being here.” “On Wednesday I was chilling. When we wrestle 12 rounds, towards the end, the last three or four rounds, I chuck on a playlist from YouTube, WWE Attitude from the ‘Attitude Era’ – 20 different tracks from superstars I admire, and that will get me in that zone, and Undertaker’s theme was one of them. So as I was sitting down feeling it, and it just made sense. Also shout out to the UFC production team, who were so accommodating, to make it a show. This is the UFC, you wanna give them a show. I said all week, this feels like WrestleMania. Who was undefeated at WrestleMania? The Undertaker. And I’ve been feeling dark all week.”