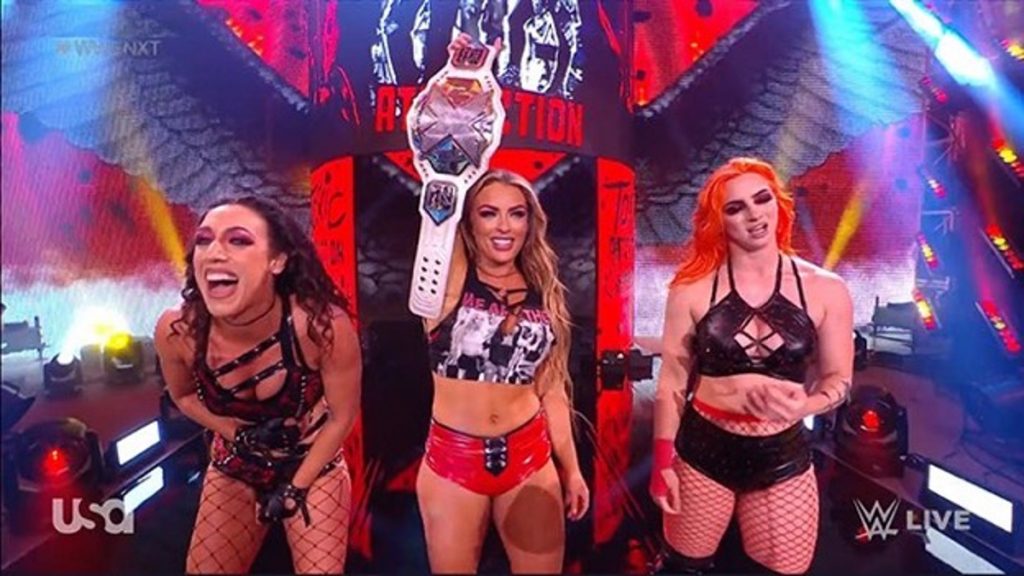 This was a decent episode of NXT. the main event was the highlight of the evening. The action was pretty good and the mini-storyline of Nikkita Lyons overcoming an attack earlier in the night heightened the stakes. The lowlight of the evening was probably the match between Kiana James and Fallon Henley. The match was ok but there wasn't anything special about it. Shawn Michaels announced most of the Iron Survivor participants while leaving the final spots open to be decided at a later date. This episode loses points because none of the matches ascend into the category of great.

On tonight’s episode of NXT: Malik Blade is looking to avenge the destruction of his father’s sweater. Will Von Wagner get his comeuppance? Roxanne Perez takes on Indi Hartwell. Kiana James goes one on one with Fallon Henley. Toxic Attraction faces the trio of Nikkita Lyons and the women’s tag team champions, Kayden Carter and Katana Chance. And Shawn Michaels announces participants for the Iron Survivor Challenges. Who will participate in the first edition of this match?

Perez focused on the sleeper holds early on while Hartwell countered with power. Later, Hartwell focused on her opponent’s lower back with three bodyslams. In the finish, Perez countered an attack from Indi Hartwell and won with Pop Rocks.

Duke Hudson tried to apologize to Andre Chase by starting a petition to get Chase into the Iron Survivor Challenge.

ABOVE AVERAGE Dijak vs Dante Chen:

Dijak pummeled Chen early on, landing a chokeslam. Chen got in a brief bout of offense halfway through, but it wasn’t enough. Dijak won in dominating fashion. After the match, Dijak called out the NXT locker room.

JD McDonagh told the Creed Brothers they don’t stand a chance against Veer and Sanga.

Shawn Michaels, Road Dogg, X-Pac, Molly Holly, and Alundra Blayze talked about who to put in the Iron Survivor Challenges.

Hudson had the power advantage, but Waller took the advantage by hair-pulling and distractions from Hudson’s Chase U teammates. Later, Duke Hudson paid homage to Dusty Rhodes and Hulk Hogan in his offense on Waller. Thea Hail was the deciding factor when Duke Hudson narrowly avoided an accidental kick to his Chase U stablemate. This allowed Grayson Waller to finish him off with a stunner.

Javier Bernal tried to sell a bunch of weird products before Axiom challenged him to a match.

James controlled this match in the beginning, targeting Henley’s limbs. Despite hurting her arm, Fallon Henley fought her way back, getting a near fall. James tossed her bag at Henley as a distraction, opening the door for a 401k.

Odyssey Jones and Edris Enofe hyped up Malik Blade ahead of his match with Von Wagner.

Zoey Stark attacked Nikkita Lyons as she made her way to the ring for a six-woman tag match. The match was canceled as Toxic Attraction mocked Lyons’ injury.

A video for a new superstar named Lyra Valkiria is shown.

Elektra Lopez said that she came back to NXT to become the face of the women’s division.

Bernal countered a rope move by disrupting Axiom’s balance. Then, Bernal focused on the injured knee of his opponent. Axiom responded with an armbar submission but Bernal broke out of it with a powerbomb. In the end, Axiom got the victory on a Golden Ratio kick.

Nikkita Lyons avoided an injury and was cleared for action.

Bron Breakker and Apollo Crews met at a diner to talk about their upcoming match.

After he toppled Creed on the ring corner, McDonagh drop-kicked him onto the floor. Later in the match, Veer and Sanga came to the ring to watch the action. McDonagh tried to hit Julius Creed with a chair, but Sanga took the shot for him. The ref disqualified JD McDonagh for trying to use a chair on Creed.

Tony D’Angelo made a deal with Dijak regarding Wes Lee.

Blade looked to get revenge on Wagner for destroying his father’s sweater and opened the match with intensity. Impressively, Malik Blade body-slammed his much larger opponent. Unfortunately for Blade, Von Wagner got his knees up to counter the frog splash. Wagner won on a Death Valley Driver and brawled with Odyssey Jones and Edris Enofe post-match.

Shawn Michaels announced that Carmelo Hayes, JD McDonagh, Grayson Waller, and Joe Gacy will participate in the Men’s Iron Survivor Challenge. On the women’s side, Zoey Stark, Cora Jade, Roxanne Perez, and Kiana James. A wild card match will decide the final participant for both the men and women.

The team of Lyons, Carter, and Chance had the advantage early on, driving Toxic Attraction out of the ring. To turn it around, Mandy Rose hit Carter with an elbow to the back of the head while Jacy Jayne and Gigi Dolin followed up with a double knee. Later, Lyons nearly got the pin but Gigi Dolin broke up the pin. In the finish, Dolin pinned Lyons.

This was a decent episode of NXT. the main event was the highlight of the evening. The action was pretty good and the mini-storyline of Nikkita Lyons overcoming an attack earlier in the night heightened the stakes. The lowlight of the evening was probably the match between Kiana James and Fallon Henley. The match was ok but there wasn’t anything special about it. Shawn Michaels announced most of the Iron Survivor participants while leaving the final spots open to be decided at a later date. This episode loses points because none of the matches ascend into the category of great.