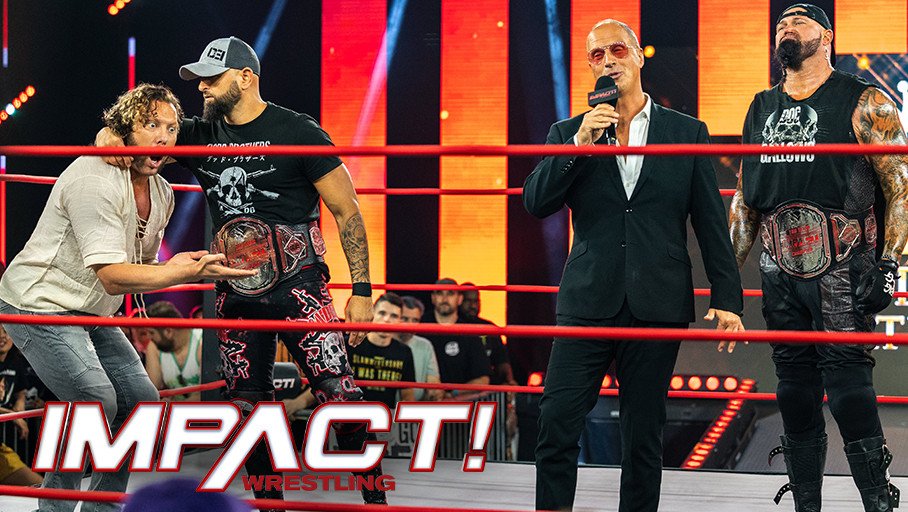 With just 2 days to go until Homecoming, Impact has a lot to offer. With the in-ring Impact debut of ‘Switchblade’ Jay White, an 8-man tag, and a huge Slammiversary rematch, we are lined up for a good show.

AVERAGE: Opening the we got the Impact Wrestling World Tag Team Champions, The Good Brothers, going against Bullet Club leader Jay White and partner Chris Bey. Gallows and Anderson won the short contest, after hitting Bey with a Magic Killer, pinning him for the three count. I was fine with White and Bey losing, as they had never teamed before, but at the same time it sucks to see Jay White lose his Impact Wrestling debut. Plus I was sure this match would be match of the night but it was rather short and not as good as I expected.

SATISFACTORY: Next up was Kaleb with a K vs Taylor Wilde. Another short match, as Kaleb basically got no offense against Wilde. Wilde won the match, hitting Kaleb with a reverse rana and a german suplex.

RESULT: Taylor Wilde defeated Kaleb with a K via pinfall

GOOD: 8-Man tag action was up next as the team of No Way, Fallah Bahh, and FinJuice took on Ace Austin, Madman Fulton, Rohit Raju, and Shera. Ace Austin was definitely the star of this match and even at one point hitting two back-to-back diving moves to the outside onto everyone. But despite this and a lot of other good offensive moments from the heels, the faces got the upperhand and won in the end.

GREAT: Out came The Belt Collector, The Best Bout Machine, the AEW Champion, AAA Grand Champion, and Impact Wrestling World Champion, Kenny ‘By God’ Omega. Kenny came out along side The Good Brothers and Don Callis. Callis started to cut a promo about how good Omega is, (even referring to Omega as better than Ric Flair.) before Sami Callihan came out. Callihan let The Elite know that next week they will face Callihan and 2 partners in 6-man tag team action. Callis challenged Callihan to come down to the ring right then and there, but before he could, ‘The Elite Hunter’ Frankie Kazarian returned to Impact Wrestling to attack Kenny and The Good Brothers from behind. When Sami and Frankie get backstage they are approached by Tommy Dreamer and are whispered who their 3rd man would be, while we, the audience had no clue who it was. Frankie liked Tommy’s idea but Sami hated it.

GOOD: In the next to last match we got more tag team action as Rich Swann and Willie Mack took on Violent by Design. VBD had control of the match, up until Rich Swann tagged in Willie Mack. Mack took control for his team, allowing Swann to get back in and win the match for his team with a 450 splash.

AVERAGE: Backstage we saw Gia Miller and Eddie Edwards. Gia interviews Eddie about his match this Saturday at Homecoming before Tommy Dreamer interrupts them. Tommy asks for Eddie to team with Frankie Kazarian and Sami Callihan next week to take on The Elite. Eddie is not interested at first due to his violent past with Callihan, but Tommy Dreamer reassures Eddie that everything will be. Eddie agrees and we got a star studded match lined up for next week.

GREAT: In the main event, we got a Slammiversary rematch between Moose and Chris Sabin. Moose took control very early on and remained in control for most the match, only up until Sabin was able to hit a DDT. The match didn’t go on too much longer, as Moose hit Lights Out, and won the match.

Impact wasn’t as good as I thought it would be this week. While not a bad show, it’s definitely been my least favorite I’ve reviewed so far. It was cool to see Frankie Kazarian return to Impact Wrestling after some time away, and the main event was really good, but almost everything else on the show just wasn’t too special. Also, I’m not sure if it’s a Impact issue or a Twitch issue, but commentary was very hard to hear. Overall, Impact still has a lot going for it, and with Homecoming this weekend, next week should be interesting.