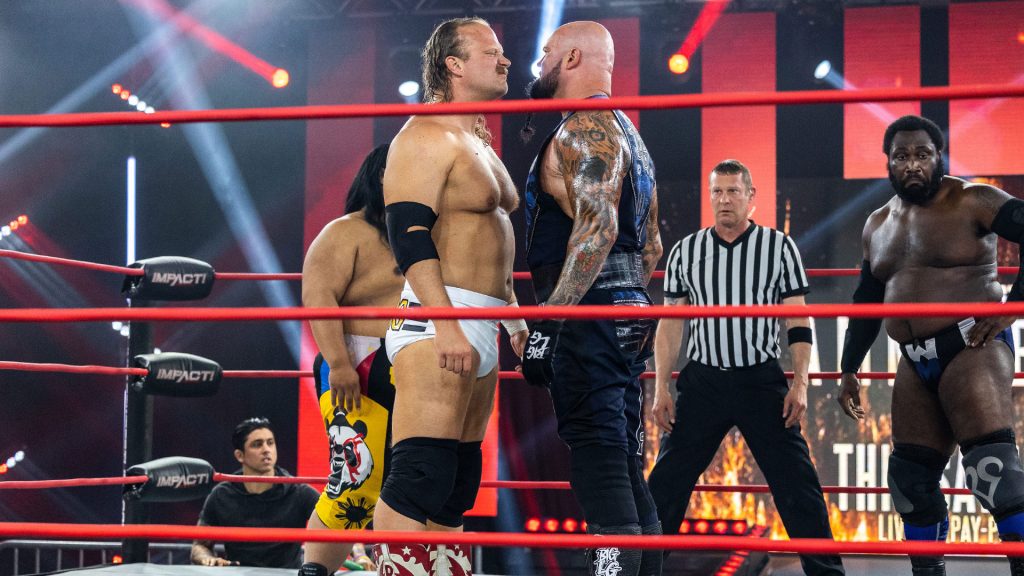 We are just 2 days away from the biggest event of the year. With Slammiversary right around the corner, tension is high. With the X-Division Championship Contenders going against each other in a 8-man tag team match, a fatal 4 way match with half the competitors from the tag title match on Saturday, and a inter-gendered tag match lined up for tonight. With all this and more, what will Impact bring to the table on the go home show to Slammiversary?

GOOD: We opened up Impact this week with Tenille Dashwood & Kaleb with a K taking on Rachael Ellering and Jordynne Grace. The match was made official last week after Tenille and Kaleb attacked Jazz on Dashwood’s talk show, “All About Me”. Jordynne Grace and Kaleb started the match with with Jordynne getting the upper hand early on. After a one count from Jordynne, Kaleb escaped to his corner and tagged in Tenille. Rachael was then tagged in by Jordynne and she quickly took control of the match against Dashwood. Kaleb and Dashwood attempted to leave the match before being pulled back into the ring by both Ellering and Grace. Tenille and Kaleb shortly got the upper hand a couple of more times in this match before Jordynne and Rachael took control. Kaleb eventually got hit with a double team move by Ellering and Grace. With the latter pinning Kaleb for the 3 count.

GREAT: Then we got a quick backstage contract signing with Impact Wrestling President Scott D’Amore and Knockout’s Champion, Deonna Purrazzo. Purrazzo tells D’Amore she feels disrespected that Scott won’t tell her who she’s facing before running through all the names she’s defeated and all the things she’s accomplished in the past year, before ultimately signing the contract. This was incredible. Deonna is definitely one of the best female talents in wrestling right now and I can’t wait to see who her mystery opponent is this Saturday.

AVERAGE: Next we got one half of the Knockouts Tag Team Champions, Tasha Steelz, with Kiera Hogan in her corner, going against Havok, with Rosemary in her corner. Havok started off strong against Tasha getting in control early on before the show went to commerical. Coming off the break, Tasha went on a comeback, hitting Havok with a neck breaker and gaining the upper hand. Steelz ended up getting on a one count in Havok, before the two go back and fourth. Havok is then able to hit a tombstone piledriver, winning the match.

GOOD: Steve Maclin took on Kal Herro. Maclin beat Herro, continuing his undefeated streak in Impact. There isn’t much to say about this match, as it was yet again another squash match from Steve Maclin. I enjoy what they are doing with him, as I hope this eventually leads to a world title mach for the former Forgotten Son.

GOOD: Backstage we see Decay (Rosemary, Crazy Steve, and Black Taurus) confront Havok asking her to join them so they’ll be on the same page for their Knockout Tag Team Championship match. Father James Mitchell approaches them, which is strange considering Rosemary and Havok “killed” him over a year ago. Mitchell assures them he is on the same page as them and they all walk off. I’m interested to see where this alliance with Decay and James Mitchell goes.

GREAT: 8-Man tag team action is up next as the team of Ace Austin, Madman Fulton, Rohit Raju, and Shera took on Petey Williams, Trey Miguel, the Impact X-Division Champion Josh Alexander, and Chris Bey. Now this is a match I really wish went on longer. All eight of these men looked amazing in this match. I wish there were more words to put this into, but there was much going on that I’m not sure how to describe it. The faces got the win in this match after Chris Bey rolled up Shera.

GOOD: After the match, Shera and the rest of the heels attacked the faces. With Trey Miguel laid out, Chris Bey grabbed a chair in an attempt to even out the odds. As the faces chase off the heels, Bey attacks Alexander and Miguel with the chair. As Petey Williams chases Chris Bey off, Bey makes it clear that he’s going into Slammiversary on his own.

GOOD: Brian Myers and Sam Beale then came to tell Jake Something he was a professional. Earlier in the night, we saw Brian Myers talking to someone off camera, asking for help should Matt Cardona show up. Sure enough Cardona accompanies Jake Something to the ring. Myers tells Jake that he is indeed, a professional…. But not a star. He explains to to Jake that he’ll never been a star with basic black gear and a unkempt, big beard. Jake Something and Matt Cardona then attacks Brian Myers and Sam Beale and appears to have the upper hand until Tenille Dashwood comes out and low blows Cardona. Dashwood and Kaleb with a K beat down Cardona as Myers and Beale beat down Something, before leaving the Impact Zone. After the commerical break Scott D’Amore is backstage letting Cardona know that at Slammiversary that Brian Myers and Tenille Dashwood will take on Cardona along with a female wrestler of his choice.

SATISFACTORY: In the co-main event we got Moose vs Hernandez, with Johnny Swinger, who offered Hernandez a full time job at Swinger’s Palace, in his corner. I honestly thought this match would be pretty lengthy, but alas, it wasn’t. This was a very quick squash match between Moose and Hernandez, with Moose picking up the win here. After the match, Moose attempted to break the leg of Hernandez with a chair before Chris Sabin came out and stopped him. Sabin got the best of Moose in this brawl, adding fuel to their already heated rivalry going into Slammiversary.

AVERAGE: In the main event, we got “The Battles of the Hosses” between Doc Gallows, Fallah Bahh, Willie Mack, and Joe Doering. Not much to say about this match either as it literally took place within the last 8 minutes of the show. This is another one of those matches, that I wished went on longer, but obviously couldn’t due to time restraints. Joe Doering got the win in the end, after hitting Fallah Bahh with a short armed clothesline and pinning him for the 3 count.

This was a really weird episode of Impact. Nothing mind blowing amazing, but nothing terrible. I’m a little upset we didn’t get a lot of development in the Callihan/Omega story, though I guess since that was the main focus of last week’s show, they decided to give it a break. The X-Division scene is absolutely shining right now. I love the whole idea of Chris Bey not choosing sides, and I’m interested to see what happens in the Ultimate X match. The Knockouts scene looks strong too as Deonna Purrazzo gave us that great promo about how she is the best. But then again there were some negatives. I feel like Moose vs. Hernandez wasn’t needed for the show and barely added any story to Moose’s current rivalry with Chris Sabin. Then the fatal four way was very underwhelming but, that’s more of Impact’s poor time management’s fault and not the performers’ fault. Overall, Impact had a decent go home show for Slammiversary, building up some previously underbuilt rivalries, and announcing a new match. It’ll be interesting what Impact does this Saturday.