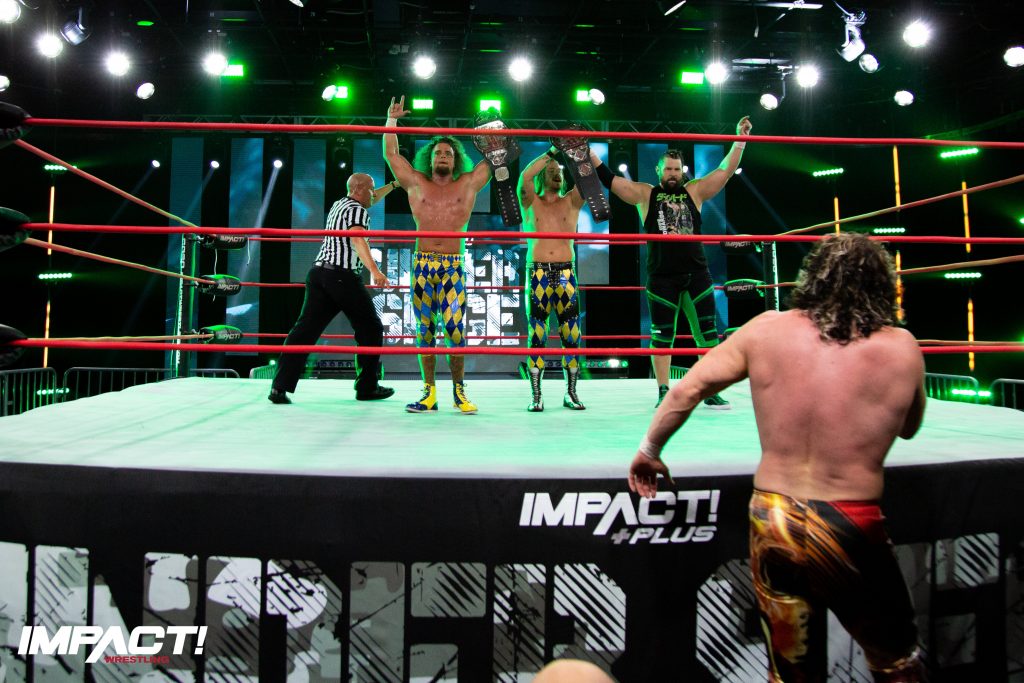 Impact Under Siege is here!!!! This was the first Impact Specials after an amazing change from Impact last month at Rebellion. This special featured some title matches and a couple of number 1 contenders bouts.

AVERAGE: Brian Myers vs Black Taurus kicked off Under Siege. This match overall was like a usual Impact Wrestling weekly show match, it was just boring and it didn’t suit to be in a special. Black Taurus gave a good showing here but him losing was just make sense especially with a weak lariat by Myers.

AVERAGE: Up next, we got a match that should’ve been in an Impact Weekly show. Susan & Kimber Lee fought Taylor Wilde & Tenille Dashwood in a decent match. Taylor Wilde pinned Susan with a Bridging German Suplex after a distraction from Kaleb.

AVERAGE: We got our first #1 Contender match, it’s a fatal four-way between Team XXXL, Petey Williams & TJP, Raju & Shera, and Ace Austin & Sawyer Fulton. This was such a slow tag team match with a kinda boring paced in it. There were some good spots but it didn’t change the problem of this bout. Ace Austin pinned Larry. D with an assisted splash from Sawyer Fulton. they became the #1 contender for the Impact World Tag Team titles.

AVERAGE: Up next, we got W. Morrissey vs Willie Mack. This match proved that Morrissey is the new monster of Impact Wrestling. Morrisey dominated the match by giving a lot of offense to Willie Mack. The action ended when Morrissey delivered a big boot to the back of the head, for the win.

GOOD: After the match ended, Morrissey brutally attacked Willie Mack. Morrissey was about to hit Mack with a chair, but Rich Swann made the save and attacked Morrissey. Swann then grabbed a chair and told Morrissey to leave, hinting a future match between Swann & Morrissey.

AVERAGE: The Knockouts Tag Team titles match is next!! we got Fire n Flava trying to regained their Knockouts Tag Titles against Jordynne Grace & Rachael Ellering. This match overall was a pretty decent tag match between both teams. There was some botches in this match that made the tag match kind off unwatchable. Fire n Flava defeated Grace & Ellering to win back their Knockout Tag Titles, when Tasha Steelz delivered the Frog Splash to Jordynne Grace.

MUST WATCH: Up next, we got ourselves an X Division Title match between “The Walking Machine” Josh Alexander and “The Headbanga” El Phantasmo. This is Phantasmo’s third match at Impact Wrestling and it was absolutely delivered from start until the end. Josh Alexander’s technical wrestling and ELP’s rough gimmick made this match felt really unique. The near falls and the counters were amazing and it built really well. Josh Alexander defeated ELP with an Angle Lock and managed to retained his X Division Title.

AVERAGE: Deonna Purazzo was up next and she defended her Knockouts Title against Havok. This match felt like a downgrade David & Goliath match, where Deonna tried to lock Havok into the Fujiwara Armbar. Havok also looked really strong here when she tried to finish Deonna with everything she got. Deonna defeated Havok after she finally made Havok tapped out to the Fujiwara Armbar.

GOOD: We got our anticipated 6 Men Tag Team Match between Super Elite and the team of Eddie Edwards & Finjuice. The match overall felt like a regular 6 Men Tag and there was no exciting part in this match. The last minute sequence was great but the rest of it was just a rest holds after rest holds. Eddie Edwards delivered the Boston Knee Party to Karl Anderson and his team picked up the win after beating Super Elite.

GREAT: It’s time for the main event! We got a 6 pack challenge with winners to become the #1 Contender for Kenny Omega’s Impact World Championship. This match filled with great superstars like Chris Bey, Chris Sabin, Moose, Matt Cardona, Sami Callihan, and Trey Miguel. This match was a fast-paced action with everyone giving their best to win the match. Sami Callihan was screwed by the Good Brothers in this match when Callihan was one second away from winning. Moose then gave an unexpected “No Jackhammer Needed” to Chris Sabin to gained a victory. Moose will fight Kenny Omega at Impact Against All Odds.

Under Siege is over and this Impact special felt like a regular Impact Weekly shows. The undercards weren’t anything special and it felt really boring. The X Division Match and The Main Event saved this Special from the boredom and it felt really good to finally watch a good match in the show after a lot of decent matches that made me sleep. Against All Odds is the next Impact Specials and I hope it delivers and not just an overbooked show that felt like their weekly shows.