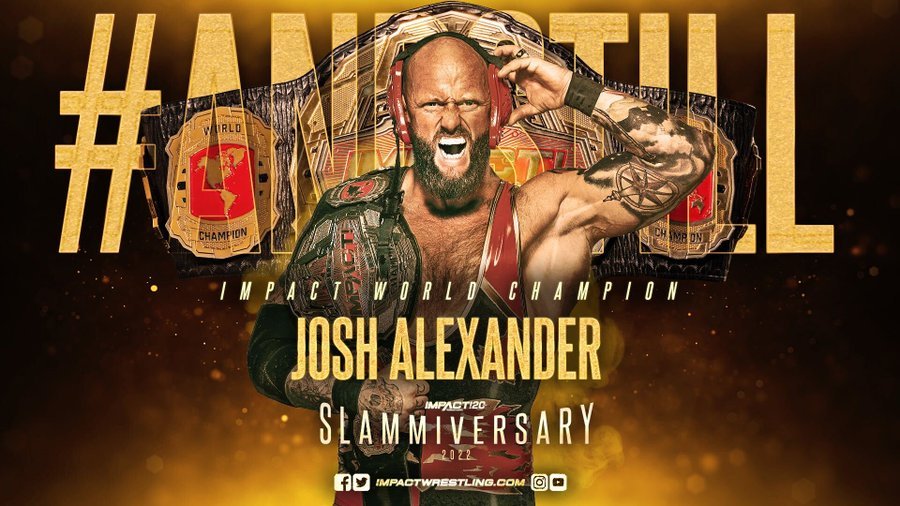 20 Years into the company’s existence they look to celebrate in many ways. Impact brought back the Reverse Battle Royal and made history with the Knockouts once again this year, bringing back the King of the Mountain match. Only this time was it the Queen Of The Mountain Match. Impact’s Ultimate X Match has six very athletic wrestlers competing for the X Division championship. The Briscoes Brothers Vs The Good Brothers look to tear the house down as well. The Monsters Ball returns for the second time this year for Sami and Moose. With the Main Event being Eric Young Vs Josh Alexander in what I’d like to call the perfect celebration of life for this company.

Return of the Reverse Battle Royal:

AMAZING Andrew Everett Vs Alex Zayne Vs Kenny King Vs Trey Miguel Vs Mike Bailey Vs Ace Austin – Ultimate X Match: With Andrew Everett replacing Jack Evans after the injury from last nights GCW event, he definitely made sure to not just be a replacement. There was a key story in the match from Ace Austin turning on Alex Zayne in Japan during the best of the super juniors events. All men truly got to show why they are special and why they fit the X Division championship. There were highlight moments such as a 5 man tower of doom superplex, a middle rope canadian destroyer, Andrew Everett taking a hurricanrana from the top of the crossed cables and a handful of other great spots. The majority of the spots looked really clean as well. The crowd was without a doubt electric from the beginning of the match and once SpeedBall Mike Bailey got the championship and got off the cables he was serenaded with You Deserve It Chants. A very solid opener from Impact tonight.

GOOD Taya Valkyrie and Rosemary Vs The Influence, Madison Rayne and Tenille Dashwood – Impact Knockouts Tag Team Championships: Overall this match had a tough time following up. I enjoyed what was in fact done in the match though. We saw a highlight spot of Rosemary going for the spear and getting dropkicked mid move. I think this match had some solid and praisable tag team psychology. The result of the match was predictable but nonetheless provided an entertaining match.

Results: Rosemary by Pinfall via Butterfly Seated Atomic Drop onto the mat.

GREAT Moose Vs Sami Callihan – Monsters Ball Match: Now I want to say I saw parts of the PCO Vs Jonah Monsters ball from months ago but this is the first I’ve seen in full. I am on the fence about the pre match “deprivation” gimmick for the match. Moose and Sami knocked it out of the park in this match. We saw multiple spots that were unique, like the spear into the trash can, moose grabbing a hotdog from a fan and a Sky High from the middle rope into the thumbtacks. This was a very enjoyable match from bell to bell and Sami Callihan got the victory!

GREAT The Good Brothers Vs The Briscoes Brothers – Impact World Tag Team Championships: During the match commentary told the viewers how their match back in April had a lot of interference which made sense. Both Teams had their moments to shine in the ring, having what turned out to be a great brawl. There were some great spots/bumps taken and both teams had a great tag team match. After the match America’s most wanted, James Storm and Chris Harris come out to the ring, commending both the Briscoes and the Good Brothers for the ass kicking brawl. AMW, The Good Brothers and The Briscoes all have a toast to tag team wrestling with Chris having water not beer.

Results: The Good Brothers by Pinfall via Magic Killer

AMAZING Honor No More, Mike Bennett, Eddie Edwards, PCO, Vincent, Matt Taven Vs Impact Originals, Alex Shelley, Chris Sabin, Frankie Kazarian, Nick Aldis, and The American Wolf, Davey Richards – 10 Man Tag: This match as a whole was one of the most well paced 8+ person tag matches I have ever seen. There were a lot of stories in this match, like Eddie Vs Davey being ex partners. There was really good tag team offense from the Impact Originals team with Honor No More getting good spots of offense. To continue with the pacing, this match just felt like everyone had a purpose, everyone was in this match for a reason not to just get people on the show. This match from beginning to end was very enjoyable with Earl Hebner, Traci Brooks, Christy Hemme, Dixie Carter all playing parts in it.

AMAZING Deonna Purrazzo Vs Chelsea Green Vs Mia Yim Vs Jordynne Grace Vs Tasha Steelz – Mickie James Special Guest Enforcer, Queen of the Mountain Match, Impact Knockouts World Championship: Within this match there were a lot of stories being executed, Savannah Evans trying to stop Mickie from putting Tasha in the penalty box, Mickie James getting the door kicked in her face. It took until close to the end for Tasha and Jordynne to become eligible to win, and Jordynne got the pin on Tasha before having a clear path to hang the championship. A lot of unique spots in general, and an awesome moment with Deonna and Chelsea being pushed off of the ladder to the outside through two tables by Mia. All the women in the match looked really good. I was shocked Jordynne took the victory in the match but the crowd was really alive for her.

Results: Jordynne Grace Strapped the Championship on the hanging bar.

PERFECT Josh Alexander Vs Eric Young with Violent By Design- Impact World Championship: To start this off, I was not expecting this entire match to steal the absolute show with what I called in the preview, the Perfect Celebration of Life for Impact/TNA. Eric Young has always been a really solid in-ring wrestler and Josh Alexander has become one of the top wrestlers in the world within the last 12+ months with his X Division championship reign and his rise back to the World championship after losing it to Moose the same night he won it. Without watching this match a second time, I can truly say this match is a tribute to Impact’s past, with the amount of call backs/tributes done in this match being more than I was able to count. This match is actually easily comparable to the “Greatest Match ever” between Edge and Randy Orton where they did moves like the killswitch, stunner, rock bottom etc. The only thing is, this match took the tributes and multiplied it by two or three. I think the interference by Deaner and Joe Doering was done perfectly with an absolutely insane olympic slam through a table. Seeing Josh bring out Scott’s Canadian flag hockey stick was goosebumps from it appearing earlier. The piledrivers on the exposed wood were done nicely and the small amount of blood on Alexander’s forehead was just enough. Josh and Eric had an absolute classic that would be match of the month if Cody Rhodes Vs Seth Rollins didn’t take place.

Results: Josh Alexander retains by Pinfall via C4 spike on the Exposed Wood.

Overall Impact celebrated 20 years of operation in a show that is seriously in contention as one of the top events this year. Kurt Angle, Sting, and AJ STYLES got to send in videos to provide their well wishes for the company spread throughout the event. All of the matches on the main show delivered in a phenomenal way, yes the pun is intended. We had three of the top stipulations from Impact’s creative, in the Ultimate X, Monsters Ball and Queen of The Mountain matches all delivered solid and enjoyable matches. The matches that pitted impact’s now/future Vs Impacts past delivered as well in the 10 man tag and the main event. It was a pleasure to watch this show top to bottom as it was the Perfect Celebration of Life for Impact.

Photo Credit: (Impact Wrestling’s Twitter) For inquiries about the rating criteria check out the article announcing the new system here: