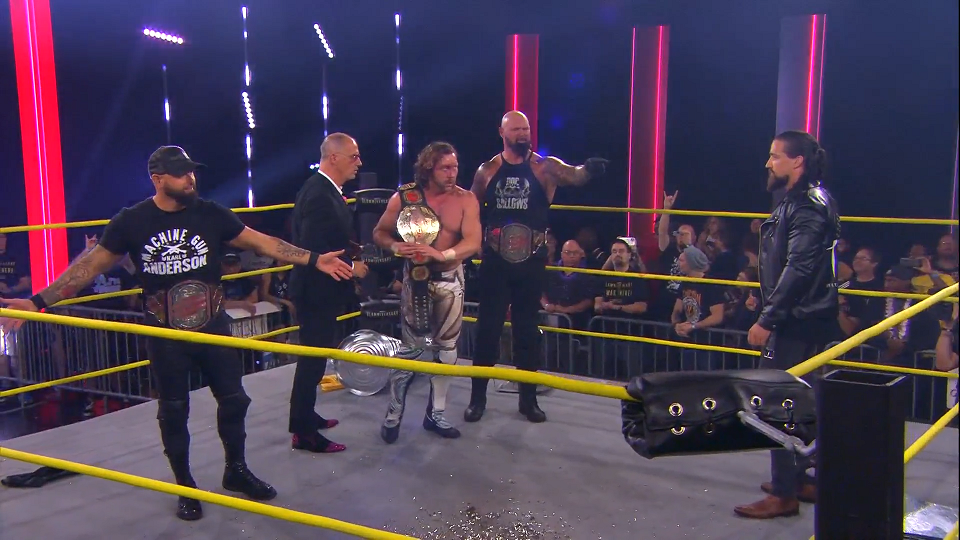 Slammiversary is finally here and Impact really gave us a really stacked card for their show of the year. Impact also promised that we will see so many surprises tonight so we have to be prepare before getting goosebumps everytime we look at these surprises. Fans are officialy back to the show as well, when Impact had a soldout tickets in their place. If you guys missed Slammiversary, this review will help you guys think about it.

MUST WATCH: Slammiversary started with the highly anticipated, the returning Ultimate X match. This match involved 6 awesome X-division wrestlers and they are ready to get what they deserves. The champion, Josh Alexander tried so hard to beat other 5 competitors in this match with awesome spots from start to finish. This bout overall was really fun with some unique spots. The moment of this match was when all 6 wrestlers gave submission to each other. After a really tough contest, Josh Alexander retained his title and continue to have a huge title reign.

AVERAGE: Up next is a mixed tag match between two best friends. Brian Myers teamed up with Tenille Dashwood to face Matt Cardona and the returning Hot Mess, Chelsea Green. Honetly, this match was actually good for what it was. Chelsea gave a great showing while being injured. The story behind this match is also funny with Green fighting off with Cardona’s ex. The match ended while Chelsea delivered the unprettier to Tenille, for the win.

GOOD: W.Morrissey now have a contest with the face of Impact Wrestling himself, Eddie Edwards. Morrissey & Edward surprisingly were putting a really good match together. This was also marked as one of the best W.Morrissey match since WWE released him a couple years ago. Morrissey defeated Eddie Edwards after Morrissey hit Edwards with a brutal powerbomb.

BAD SQUASH: The strangest segment in this show is on the way when Mahabali Shera & Sawyer Fulton got into an alteraction that made Scott D Amore put them in an impromptu tag match against the returning FinJuice. This match happened really quickly and it really hurts Sawyer Fulton’s credibility as a monster. FinJuice won the match, leaving Fulton & Shera fighting in the ring.

GREAT: Moose is next and he’s trying to give his vengeance to Chris Sabin in a match that was build beautifully. The bout itself was awesome like their feud. Sabin vs Moose was a version of “David vs Goliath” that i never knew i needed. Moose dominated this match but Sabin’s underdog story really made this contest looked like a million bucks. Before Moose hit his finisher, Sabin turned the situation around with a roll-up out of nowhere to picked up the win.

AVERAGE: Fatal 4 way tag team match is up next and Fallah Bahh surprised us with No Way Jose’s arrival to Impact Wrestling. No Way Jose became his partner for a night after TJP was unable to compete. The bout itself was surprisingly decent. with the amount of talents on the ring, i expected them to have a batter match, especially with crowds around them. No Way Jose’s appearance was cool and he was over with the crowd after giving a couple of flamboyant moves. In an unexpected outcome, Good Brothers pinned one of the tag team champions, Rhino, with the magic killer to regained their tag team titles.

GREAT: It’s time for us to find out who’s going to be Deonna Purazzo’s mystery opponent. Thunder Rosa’s music hit and the crowds went crazy. the Dream Match between the Virtuosa and Thunder Rosa hit different. the contest between those two knockouts went really well because both of them have good chemistry together. The match might be the best Deonna purazzo’s title defense in a while. The Virtuosa also picked up her win with Queen’s Gambit.

MUST WATCH: After the match ended, The “Hardcore Country” Mickie James made her return to the Impact Zone. Mickie James invited the Knockouts Champion, Deonna Purazzo, to her all women’s ppv, NWA EmPowerrr. Deonna instantly rejected her offer and continued to roast the hell out of Mickie James. Deonna even gave a shot at Mickie’s trash bag situation. James went mad and gave Deonna a Mick Kick before celebrated it with the crowds.

MUST WATCH: In the main event of the evening, Kenny Omega defended his Impact World Title against Sami Callihan in a No Disqualifiqation match. No DQ match an be described different with Sami Callihan in here though, cause he turned this match into a full deathmatch. It was weird seeing Omega in a deathmatch at first, but after 28 minutes of brutal actions, i like how Omega just changed his style of wretling into a deathmatch stuff. The false finishes in this match was perfectly executed and it made me want to rewatch this match more and more. This was the type of deathmatch that didn’t really feel like garbage wrestling. Their chemistry with each other was also amazing. Kenny Omega ended Sami Callihan after he delivered the One Winged Angel on multiple thumbtacks.

MUST WATCH: After Omega fought Callihan in a deathmatch masterpiece, the leader of Bullet Club, Jay White, came out and the crowds went loud. The current NEVER Openweight Champion had a faceoff with the former leader of Bullet Club, Kenny Omega. This was an awesome moment and it reminded me of their United States title feud at NJPW back a couple years ago. While the Good Brothers tried to give White the “Two Sweet”, FinJuice came out to attack Jay White. The Switchblade hit his finisher on Juice Robinson and ducked out.

Impact Slammiversary delivered their show from top to the bottom. One word to describe this PPV was “Surprises”. There were a lot of surprises here that really made Impact looked like a strong show last night. The only problem with this show was the production that made some spots in matches doesn’t focus on their own. I hope Slammiversary makes Impact visible again to the casual fans, especially with the amount of their roster right now.