Impact Against All Odds Review 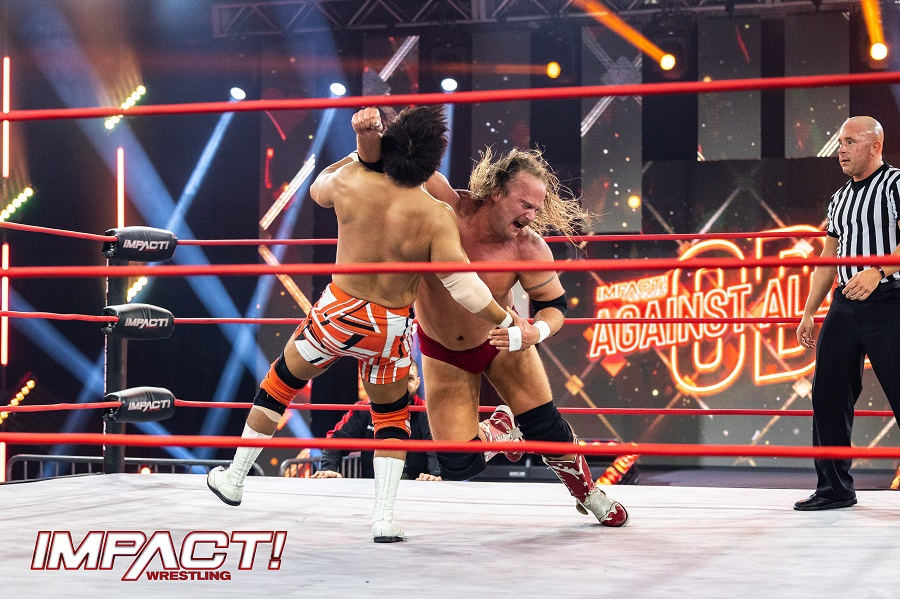 Impact Wrestling is back with his specials!!! Last night, they had Against All Odds which featured Kenny Omega’s first Impact World Title defense against The Wrestling God, Moose. The final bridge before Slammiversary also featured a couple of knockout matches and a face-off between two former AJPW Triple Crown Champions.

GOOD: A street fight between Good Brothers and two hardcore superstars, Sami Callihan & Tommy Dreamer, started the show. This match was just a regular street fight that sometimes the pace of this match was messed up with how the chemistry between both teams was built. Sami Callihan carried the team by giving them a win after a brutal attack with a bat to Karl Anderson.

GOOD: Up next is the fight between the former AJPW Triple Crown Champions. The member of VBD, Joe Doering, fought the NJPW Veteran, Satoshi Kojima, in a hard-hitting battle. Joe Doering finally showed off his skills to the Impact audiences. Both competitors didn’t look very weak in this match because they both showed how capable they are to make the audiences impressed with their skills. Joe Doering wins the match with a spinning powerbomb following a gigantic lariat to Kojima.

GOOD: Fatal 5 Way X Division match for a chance to face Josh Alexander for the X Division Title was next!!! Ace Austin, Chris Bey, Petey Williams, Rohit Raju, and Trey Miguel were having such a really good fast-paced match. Petey Williams is the oldest one in this match, but he was also the MVP with how athletic he was in this match. Petey still delivered the Canadian Destroyer beautifully to his opponent. When this bout starting to be awesome, Sawyer Fulton ruined it by attacking 4 competitors in this match except for his master, Ace Austin, which made the referee ended this match with a no contest.

GOOD: The wannabe Edge, W.Morrissey is next when he faced Rich Swann. I thought this match was going to be that typical squash match that made Morrissey over, however, Rich Swann gave so many big offenses to Morrissey which was awesome. This match was a downgrade David vs Goliath match but it was still really good. Rich Swann was beaten by W. Morrissey after Morrissey slammed Swann with a Running Powerbomb.

AVERAGE: Grace and Rachael Ellering began arguing after the contest about Ellering getting involved in the match by going after Kaleb. Grace declared that she could handle this on her own, so she dashed into the arena and assaulted Dashwood and Kaleb.

AVERAGE: Knockouts Tag Team Titles match was next!!! Fire ‘N Flava faced Susan & Kimber Lee in such a really decent match. Susan needs to come back as her old self which is Susie or the monster, Su Yung, cause this whole Susan thing doesn’t work for her. After Tasha Steelz struck Lee with the Frog Splash, Fire ‘N Flava overcame Kimber Lee & Susan to win.

GOOD: VBD is next, as they exploited the Freebird rule to defend their Tag Team Championships against DECAY by moving Joe Doering to Cody Deaner. This was a pretty good match, with DECAY winning by a wide margin. Black Taurus went about his business, as usual, always switching the switch to turn off VBD. Violent by Design, on the other hand, has that approach in their arsenal, and Deaner defeats Black Taurus by finishing his friend, Crazzy Steeve, with the Deaner DDT.

AVERAGE: Rosemary has gotten herself into trouble by attempting to confront Deonna Purazzo, the Age of Virtuosa. This bout got off to a fast start with Rosemary slamming Deonna with a barrage of assaults. The battle slowed down when the tempo began to pick up, with Deonna demonstrating her technical maneuvers to Rosemary. Rosemary, as predicted, was unable to defeat Deonna, who quickly dispatched Rosemary with the spike piledriver to take the victory.

GREAT: It’s time for the main event! Kenny Omega defended his Impact World Championship against Moose, The Wrestling God. After hearing so much about Omega’s injury problems, this match had a big impact. In this encounter, Omega wrestled very slowly, and it appeared that Moose carried the contest more than Omega, which was awful. The bout was still quite fantastic overall, but the Young Bucks’ superkick on Moose at the end really ruined it. Kenny Omega won by slaying The Wrestling God with the One-Winged Angel.

GOOD: After the bout, Sami Callihan arrived in the ring and used his baseball bat to knock out The Young Bucks and Omega. Callihan acquired the steel chair and was ready to use it on Omega when Don Callis fired him from IMPACT Wrestling, despite the fact that he was the company’s Executive Vice President.

For an Impact Specials, this show was pretty solid top to bottom. Against All Odds was filled with fun matches to progress the build to Slammiversary. However, the production of Impact still really hurt the product with how awful the camera shots were. I hope they can fix these problems at their main show, Slammiversary. Overall, this show was decent to watch with friends at home and spend time with them.