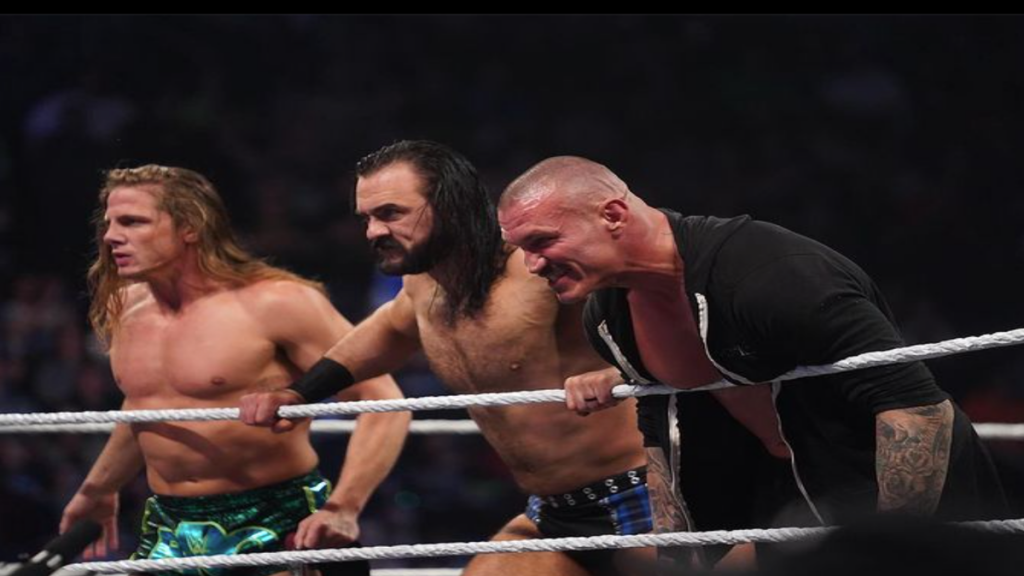 On this week’s episode of Smackdown: Ronda Rousey and Charlotte Flair compete in a Beat the Clock “I Quit” Challenge. Who will prove to be the superior superstar in forcing their opponent to say the words “I Quit”? RK-Bro and The Usos sign the contract for the title unification match at Wrestlemania Backlash. What chaos will erupt at this signing? Ricochet defends the Intercontinental Title against Shanky. Will the champion retain or will Jinder Mihal’s partner win his first title in WWE? And the Scottish Warrior, Drew McIntyre, goes up against the Master Strategist, Sami Zayn, in a Steel Cage Match. Will McIntyre emerge victoriously or will Zayn find a way to escape from the clutches of defeat yet again?

GOOD: Drew McIntyre vs Sami Zayn in a Steel Cage match. Despite his reluctance to enter the cage, and McIntyre’s early dominance, Zayn was able to hit a nice sunset flip powerbomb on his opponent. Later on, McIntyre turned things around by tossing Sami Zayn into the cage, hitting him with a belly-to-belly suplex, and hitting Zayn with a neck breaker. Zayn nearly escaped from the cage a few times but in the end, he was unable to avoid a trip to claymore country.

Backstage, Charlotte Flair promises she will defeat Ronda Rousey in their “I Quit” challenge.

AVERAGE: Happy Corbin hosts Madcap Moss’s Andre the Giant trophy on an episode of Happy Talk. Corbin starts this segment by taking credit for Moss’s success and was hoping to destroy the trophy Moss won after winning the Andre the Giant Battle Royale. Fortunately, Moss arrived and ensured that the only damage being delivered would be to Corbin.

AVERAGE: Ricochet vs Shanky for the Intercontinental Championship. Shanky was dominant early on and nearly won as a result of interference on his behalf from Jinder Mahal. Unfortunately for him, Ricochet was able to roll him up and retain the title. After the match, Shanky let Jinder Mahal know he had had enough of Mahal.

SQUASH –  Raquel Rodriguez vs Cat Cardoza in Rodriguez’s debut match on Smackdown. Cardoza showed some life and attempted to gain an advantage with a pre-match attack. It was not enough as Rodriguez was able to win this match easily and quickly.

Gunther and Ludwig Kaiser had a brief video segment in which they promised to bring respect to the ring.

GREAT: RK-Bro and The Usos have a contract signing for their Tag Team Championship Unification Match. After the Usos gave their “we the ones” spiel, Orton helped Riddle tell the two apart. Jey is the right-hand man and he used a less nice term to describe Jimmy. A brawl erupted between the two and Roman Reigns arrived to tip in the brawl in favor of the Usos. then, Drew McIntyre came to the ring to challenge the Tribal Chief. Just as importantly, Reigns ripped up the contract throwing the status of the unification match into doubt.

AVERAGE: Naomi vs Shayna Bayzler. The two traded moves early on with neither gaining a large advantage. Naomi managed to throw Bayzler into the ring corner and then roll her up for the win. Post-match, Natalya and Bayzler attacked the tag team champs.

AVERAGE: Ridge Holland vs Xavier Woods. The New Day roasted Sheamus for having so many tag team partners over the years. They even bestowed a new nickname on him, Shake-it Sheamus.  Holland hit Woods with a spinebuster and was looking to deliver a powerbomb before Woods rolled him up for the victory. Sheamus was angry at Ridge Holland for losing and decided to challenge Kofi Kingston to a match immediately after.

GOOD: Sheamus vs Kofi Kingston. Kofi had the advantage early on but Sheamus took control with three Irish Curses. Sheamus tried to finish off Kinston with a Brogue Kick but Kingston dodged it. Sensing an opportunity, Kofi Kingston tried an attack from the top rope but Sheamus recovered and hit Kingston with a knee. This set up the Brogue Kick and the victory for Sheamus. After the match, Sheamus and Ridge Holland delivered an attack on the New Day, putting Xavier through a table.

GREAT: Lacey Evans tells the fourth part of her life story, this time talking about her time in the US Marines and how her parents were not there when she graduated boot camp.

AVERAGE: Ronda Rousey and Charlotte Flair in a Beat the Clock “I Quit” Challenge. Rousey faced off against Shotzi for her half of the challenge. Shotzi attempted to run around the ring in an attempt to last longer but said “I Quit” after one minute and forty-one seconds. Charlotte meanwhile faced off against Aliyah who put up a much bigger fight. Charlotte was unable to force an “I Quit” out of Aliyah, making Ronda Rousey the winner of this challenge. Flair blamed Gulak for her failure and hit him with the bell.

Overall, this wasn’t the greatest episode of Smackdown, with several matches having disappointing endings and one of the best matches, the cage match, occurring at the beginning. Drew McIntyre and Sami Zayn but on a good match to start off the show, with both competitors having a few highlights. Oddly, this match occurred at the beginning of the show instead of later on. The “I Quit” segment was interesting, as neither Shotzi nor Aliyah stood to gain anything from their matches since they couldn’t “win”. Nevertheless, Ronda forced Shotzi to say “I quit” while Charlotte Flair failed to do the same with Aliyah. The contract signing between RK-Bro and The Usos went off the rails, as was expected, but neither team ended up signing the contract. Roman Reigns and Drew McIntyre showed up during the contract signing and these two have been added to the Uso-RK-Bro match, turning it into a trios match. Ridge Holland lost to Xavier Woods but Sheamus regained the dignity of his faction by defeating Kofi Kingston immediately after. Ricochet defended the Intercontinental Title against Shanky, but more interestingly, trouble is brewing between Jinder Mahal and his underling. Naomi defeated Shayna Bayzler, but Bayzler and Natalya got the last laugh by attacking Naomi and Sasha Banks post-match.