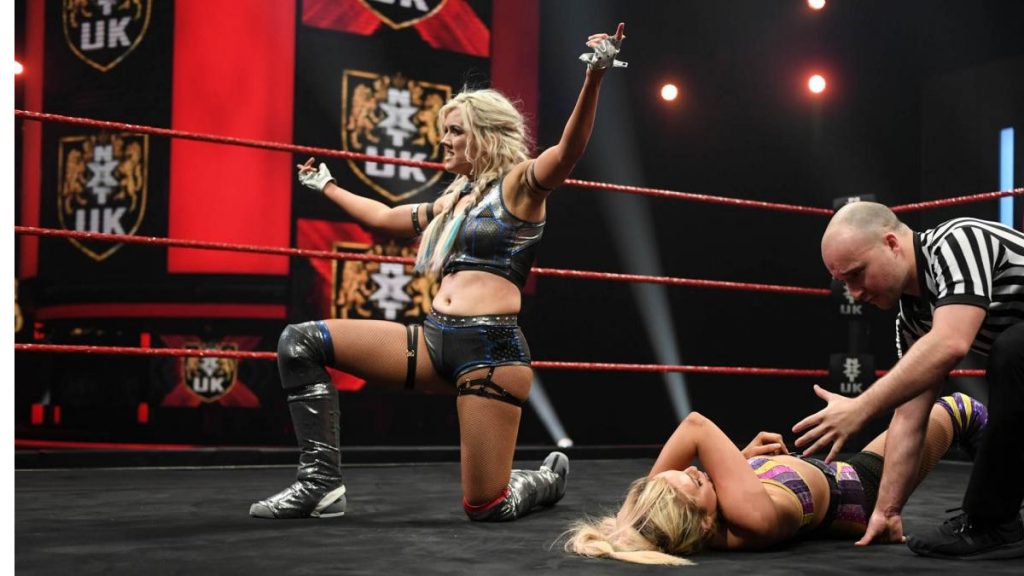 Preview: Last Week we saw Nathan Frazier get a great victory in a really good main event that saw Die Familie’s momentum of becoming a force to be recking with coming to a bit of a halt as Nathan beat the faction’s leader, Teoman. We also saw a great Supernova Sessions segment that was overall fun and enjoyable promo. This week we see Jordan Devlin Vs Wolfgang after Wolfgang was attacked by Jordan Devlin after the Supernova Sessions drama. We also see a lower card rivalry come to a head as Sam Gradwell Vs Kenny Williams takes place and two other matches both being women’s wrestling.

AVERAGE Sam Gradwell Vs Kenny Williams: Fundamentally this match didn’t have any botches or anything that looked off but it was very short. Both guys’ offenses worked and looked good. The overall match was decent but the finish and post-match stuff provide the assumption we are getting a rematch in the future as Sam Gradwell had his hair cut by Kenny.

Results: Sam Gradwell countered a pin attempt and was able to secure the 3 counts folding up Kenny Williams.

Gallus Watches last week’s supernova sessions: In a short segment while Wolfgang is getting ready for the Main Event Mark and Joe are enjoying highlights of last week when they took over Supernova Sessions. Wolfgang is shown mad and didn’t think it was that funny anymore as he leaves as the main event is to come.

GREAT Xia Brookside Interview: Overall this promo was a short but good promo. We saw continued development towards Xia becoming this entitled, self-centered and bratty girl and it continued as she was asked Amale. Xia continues to go further down the line of becoming this b*tch of a character. With Amale probably going to get a rematch with Jinny soon we can expect a side match between Xia Brookside and Amale. I would say I am looking for it as Amale’s rise as a top babyface is without a doubt very interesting and consistent with these short matches.

Bomber Challenges: Dave Mastiff starts trying to let Jack Starz earn his stripes as he needed to do a lot of squats, eat a lot of some food items as well as run into a place in the nude. Overall it was a short fun segment but not going to be rated.

Sam Gradwell searches for Kenny Williams backstage, kicking down doors as he is visibly pissed.

GOOD Angel Hayze VS Emilia McKenzie: Overall this was a short but very competitive match. I believe everyone knew who was going to win the match but regardless, Angel Hayze looked good as a potential future star of the brand. Overall I liked the finish with Emilia countering Angel into the finisher. Fun short match, with nothing to complain about.

Results: Emilia McKenzie wins the match after a wheelbarrow facebuster.

GOOD Nathan Frazer Challenges Ilja Dragunov: NXT Uk loves the short but sweet promos and this worked. Nathan Frazer commented about beating Teoman after getting Mugged by them as well as how he had a match with Walter. Nathan Frazer knows he is a young guy who is getting the chance of his life and that’s what makes him likable. Nathan challenge Ilja with the statement of how good would that be? And Nathan Vs Ilja when it happens will be a banger of a match.

Die Familie are shown in their apartment where they are talking about Teoman losing and Teoman promises to his family that they will not be stopped. They mention “The Eye” seeing Teoman losing and maybe the loss was meant to bring the family together.

AVERAGE Stevie Turner Vs Myla Grace: Overall it was another short and fun match between the two, I think Stevie Turner got to work more as a heel in this match and that let her get more offense. Myla Grace still has some nice stuff that looked good on Stevie. Not as good as the other women’s match.

Results: Stevie Turner wins after performing the side effect (I might have missed if it had a name)

NXT UK Tag Champion promo Video: Overall the promo packages that NXT Uk do are always really good. Trent Seven seems like he could be going on a slow heel turn as he is becoming very attached to the titles. This promo video added more to next week’s title match and I’m excited to see my boys Trent and Tyler in the ring again.

Overall NXT UK continues to provide quality shows. Yes there were 4 matches and 3 were fairly short but they all had a purpose. I feel this is one thing Raw and Smackdown fails to have are important smaller matches. NXT 2.0 has a similar quality where there are meant to be two matches with greater importance. Jordan Devlin is very talented and this episode gave us multiple promos and packages that continue to provide reasons to watch next week.