Honestly: WWE Should Bring Back An Annual Tournament PPV 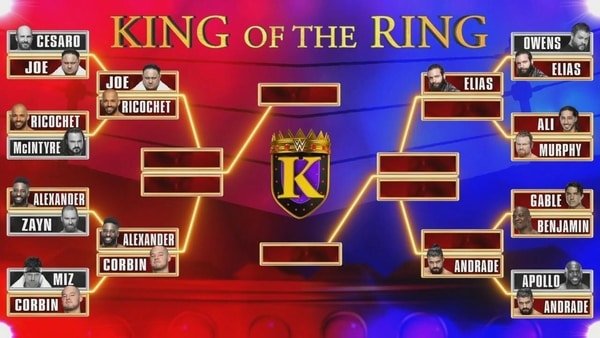 With talk of Triple H shaking up the PPV schedule, I think now would be the perfect time for Hunter to bring back an annual tournament PPV.

Triple H has long been known as a student of the game and someone that has appreciated the history and prestige of championships. There is a reason that there are several pieces of wrestling memorabilia in his office and why one of the first things he did once he took over was show video packages touting the history of the U.S. & IC Championships.

Hunter understands that re-establishing the prestige of the U.S. & IC titles, makes the holders of those titles and those fighting for them have the appearance of being a big deal. Those titles along with others in the WWE have taken a beating over the years in the prestige category as titles changed hands frequently with no apparent plan in place other than let’s give this guy the belt.

This is something that I wrote about over a year ago, calling for this very thing to happen. Here is my feeling on the manner in regards to Hell in a Cell for example, a feud should dictate the match types not whatever the monthly PPV theme is. There have been way too many Cell matches over the years with many matches forced into the Cell when their feuds didn’t necessarily warrant the need for it.

Triple H understands this as he gets the significance of the Hell in a Cell and that it was designed for incredibly heated rivalries and often times was the feud blow off match. Having HIAC just as a theme cheapens the match’s importance and significance when the feud doesn’t warrant the need for it, but you’re having one just because it is October’s PPV theme.

Bringing Back A Tournament PPV:

When I became a fan in 1998, I was first introduced to the King of the Ring, a one-night tournament PPV. Personally, I’ve always been a fan of tournaments, so this was an event that was very easy to understand and get invested in as you watched the brackets and could see potential match ups pop up as possibilities.

The KOR tournament’s original purpose was designed to elevate talent that the company wanted to promote and possibly take to the next level. There have been plenty of people that have won the KOR tournament that didn’t necessarily live up to expectations and there are others that won just so they could give them a king gimmick.

The event lost a lot of its prestige over the last few years especially when it didn’t necessarily elevate talent to that next level. There hasn’t been a KOR PPV since 2015 and there hasn’t been a winner that was truly elevated and not just given a king gimmick since maybe Brock Lesnar in 2002.

Arguably the biggest successful KOR winners that went on to become multiple time world champions, you had men like Bret Hart, Stone Cold Steve Austin, Triple H, Kurt Angle, Edge and Brock Lesnar. All of these men were elevated by the tournament and added to the prestige to the tournament as former winners.

As I have talked about previously, championships and their holders are supposed to elevate each other. The title should mean just as much if not more after you lose it and your stock as the talent should have improved from having been champion. Titles like winning the king of the ring shouldn’t just be used as a prop.

Now don’t get me wrong there have been talents such as Booker T, William Regal and Xavier Woods for example that have done very well utilizing the king gimmick. Although, these reigns were incredibly entertaining, for me personally I prefer the tournament to serve as a launching pad to elevate a talent to the next level as opposed to just a king gimmick.

For the most part the times the tournament has been utilized since leaving PPV, it hasn’t had the same feel and importance that I felt watching it during its peak years in the 90s. A large reason for that is creative booking didn’t take it seriously so why should the fans. How can you expect the fans to care if the person booking it doesn’t? The answer is the fans didn’t care and it arguably didn’t help the winners of the tournament the way it should have helped them.

With Triple H now in charge though and as a former winner that knows the importance and value of the King of the Ring, I think there is a better chance now for the tournament to mean what it used to or mean even more than it once did.

This Is How The Tournament Should Be Handled:

They should make it a one night King of the Ring PPV. Now you could either just tournament matches or you could mix in some other title matches as well. The winner of the tournament should receive world title shots at Summerslam. This instantly establishes the winning of the tournament as a big deal. You’re not only the King, but you’re also in line for the top prize of the company. I think the logical time for this PPV would be either the June or July time frame which is where the tournament used to be.

This much like winning the Rumble allows time to build up to a major main event on a major PPV. As I have said winning the King of the Ring should elevate the winner of the tournament and it also can create anticipation for Summerslam as well.

The goal of any tournament is for it to be prestigious and winning it should matter and elevate the winner.

The one potential issue is brand value in the KOR as WWE has not exactly done a great job of maintaining the prestige of the brand. So, WWE has an option to either bring the KOR tournament prestige back or possibly create a new tournament in the same vein of them but perhaps like AEW did with the Owen Hart Cup.

I don’t mean this as counter programming to the Owen Hart Cup, but the idea of naming a tournament after a GOAT legend is certainly an option for WWE. Having a tournament named after someone like Bruno Sammartino or Eddie Guerrero for example would be a great way to honor a legend and to possibly help elevate a talent.

The idea of bringing back either an iconic tournament or starting a new tournament in the same vein that can be used to elevate the future stars of this business, is in the best interest of WWE in my opinion. Tournaments are something that can be an excellent vehicle to showcase talent, give some dream match ups to fans and elevate talent. There is talk of Hunter possibly bringing the KOR back as a one night tournament and as a former winner he knows the importance it played in his own career and will want to do it for future talent as well.