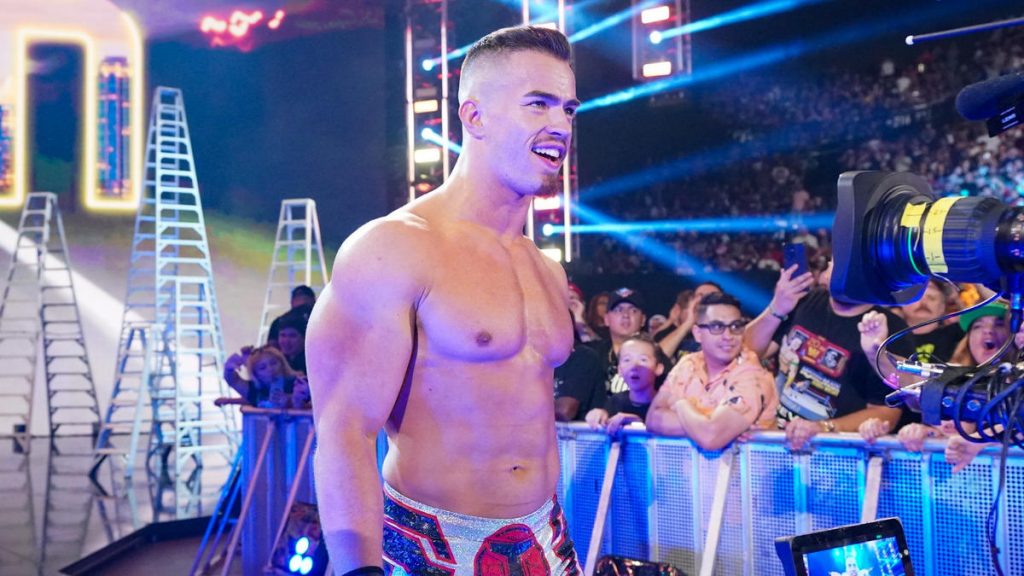 At only 25 years old, multiple WWE creative teams have shown that they can completely screw up the booking of a young talent. WWE needs to seriously right the ship with Austin Theory’s booking and rebuild him.

Austin Theory is one of those truly rare prodigies, that despite his very young age he is leaps and bounds more advanced than many of his peers at the same age. I personally first became aware of Theory during his run in Evolve. What I witnessed in Evolve from him was a very young talent maybe only 19 or 20, but he already knew just how damn good he was, and he knew he was destined for the big lights of WWE.

It was only a matter of time before WWE would come calling, that was incredibly obvious especially how he was showcased in Evolve as champion. While champion he defended the title on multiple shows against members of the Undisputed Era and was the main event in the WWN & Evolve Championship on the WWE Network. There was even a moment where the then Executive Producer of Raw, Paul Heyman, shared a moment shaking the hand of Theory.

However, Theory’s WWE run up to this point can best be described as yo-yo booking. Theory has bounced between NXT and the main roster over the past 3 years. He made his NXT debut towards the end of 2019, but only a few months later he made his main roster debut and literally bounced between two groups in a manner of a few weeks. He’d end up as one of Seth Rollins disciples, but it didn’t last long and would soon make his way back to NXT.

This next run in NXT was likely designed to try and rebuild Theory. Having Theory, a part of a stable led by the veteran, Johnny Gargano, was done so he could be mentored both on and off screen. The Austin Theory character that was a part of The Way, was treated like a moron and for someone like me that saw what he was capable of it was not a run that I particularly cared for as it appeared to me that they were wasting a prodigy talent. It is always great to be prominently featured on TV every week, but if the character that you are portraying each week is a moron, does it do more harm than good? I’d argue yes, it is.

Vince McMahon must have felt the same way as when he made his way back onto the main roster, the character he would portray was a little closer to when I first saw him in Evolve, but not as confident. Theory would become the last wrestler that the Mr. McMahon character essentially declared the next “chosen one”. It was clear from his booking that McMahon really was a fan of Theory giving him a U.S. title run and in one of his last acts the Money in the Bank briefcase.

There is arguably no one on the WWE roster that has suffered more from Vince McMahon’s departure from a creative standpoint than Austin Theory. The decision to put the MITB briefcase was widely panned by many fans as the wrong decision at the time. I distinctly remember telling friends that I cannot see him successfully cashing in and ending Roman’s reign, but with Vince’s crazy booking anything is possible.

Theory even appeared on an episode of NXT teasing he’d possibly cash in his briefcase against Bron Breakker for his NXT Championship. This was a very brief moment that literally led nowhere as it was never followed up on. It was one of a very rare booking decisions so far from the Hunter led creative team that has left me and many fans scratching our heads going why was this done in the first place.

The best I could come up with was it was done to give the audience the hint that he could cash in for a championship other than the WWE Undisputed Universal Championship.

Should Theory Have Cashed In The NXT Championship?:

I actually really liked the possibility that Theory may have cashed in for the NXT Championship for a couple of reasons. From a character perspective, Theory, is impulsive and lost his mentor in Vince and feels the pressure of cashing in, so he may not be making the best decision. He tried multiple times to cash in for the world title, which is what is expected of a MITB holder.

The NXT Championship, is not a “world” championship, but it is the top title in NXT. This would have been a great opportunity to rebuild Theory, however, Triple H wanted to erase anything from the Vince era that he didn’t care for. Having him cash in for the NXT title would have gotten the briefcase off Theory and could have helped get the NXT title off Breakker, so he could be moved to the main roster. A MITB cash in after a long grueling match would have protected Breakker and gotten Theory massive heat.

Theory could have then reverted to the arrogant champion that I first witnessed in Evolve. He could have been rebuilt under the tutelage under the master of arrogant champions both on and off screen in HBK. While in NXT he could not only rebuild his character but work with many of the young talent both on and off screen to help guide them as well like veterans like Johnny Gargano did for him. That way when Hunter was ready to bring him back to the main roster, he could be the best version of Austin Theory possible.

Of course, that is not the direction that WWE decided to go here, and it was such a colossal mistake in my opinion.

Cashed In Unsuccessfully For The U.S. Championship:

As we witnessed on Raw last week, Theory cashed in his briefcase unsuccessfully for the U.S. Championship. The one constant complaint that I have seen online since Hunter took over is that Theory appears to be treated as an afterthought or worse buried. I understand that Hunter wanted to get the MITB briefcase off him because essentially, he wants to do his thing with the character and not what Vince was going to do.

I saw one comment that this now puts Theory in the middle of a feud with Rollins and Lashley. I personally am unsure this will be as beneficial for either Theory’s short- or long-term career unless some major changes are made. Even if the three are all feuding for the title, it may add some prestige and interest for the title, but realistically he is likely not going to come out on top of both Rollins and Lashley in a feud when all the smoke clears.

So, Can This Be Fixed?

There are very few things in wrestling that cannot be fixed, but there are only so many times you can repackage or send someone back to the developmental brand, before the audience goes, we don’t care about this talent. Theory has youth on his side, so he definitely has the potential for many more years in this business and can find his best version of his character before it is too late.

I would take him off WWE TV for a few weeks. In that time, I think Theory and WWE creative come up with a rebrand for the character. When he does return, I would put him back an obvious chip on his shoulder for not only the humiliation of failing to cash in the briefcase but being the first person to try to cash in for less than a world title. He needs a new look, new music and a new cocky attitude and no more selfies.

His character in Evolve was an arrogant prodigy with a heel persona like Miz or MJF in that you just want to see the babyfaces kick his ass. I think he needs to lean more in that direction and get away from the bumbling goof that is taking selfies with his down opponents. I would take a page of the HBK playbook and bring him back with a massive bodyguard.

I think the former Commander Azeez, is the ideal choice as the bodyguard of the arrogant Theory. Azeez would need a new look as well here and perhaps a new name maybe just Azeez or something entirely new. Injecting Theory back into the U.S. title picture and in the feud with Rollins and Lashley can work if he has Azeez as his muscle. This feud can elevate Theory, Azeez and the U.S title. Rollins and Lashley are already made guys so a loss here especially with the giant Azeez playing a role in a Theory U.S title win won’t hurt either guy.

Having Theory as a dominant champion that is depending on Azeez assistance is a story that has been done before, but it is one that has been very successful in the past. A lengthy reign can help build up Theory the right way, add prestige and relevance to the U.S. title and sets up long term storytelling for the eventual Azeez being fed up with Theory.

Yes, I’m well aware they sort of just did this with Omos and AJ Styles, but that was under the Vince regime, and I have a little more faith that the Hunter regime would hopefully handle this better.

No promotion or booker is perfect and there will always be fans that criticize and complain. I know what you’re, aren’t I doing that same thing? Yes and No I don’t criticize and complain without offering potential options that I think would play out better. I consider it constructive criticism. There are plenty of people that just bury everything and are biased to the point they will always criticize and never admit when someone does something right.

As a booker the goal is to make more right decisions than wrong ones as no one maintains a perfect record. As a whole, Hunter has provided a better product than Vince was giving fans, but there are going to be learning curves and mistakes along the way.

Theory has way too much talent and potential that I would hate to see it be wasted, it is just my hope that Theory and WWE creative figure out the right formula before the audience permanently tunes out on him.