Honestly: Why Title Belts Shouldn’t Just Be Props and Why Fans Collect Them 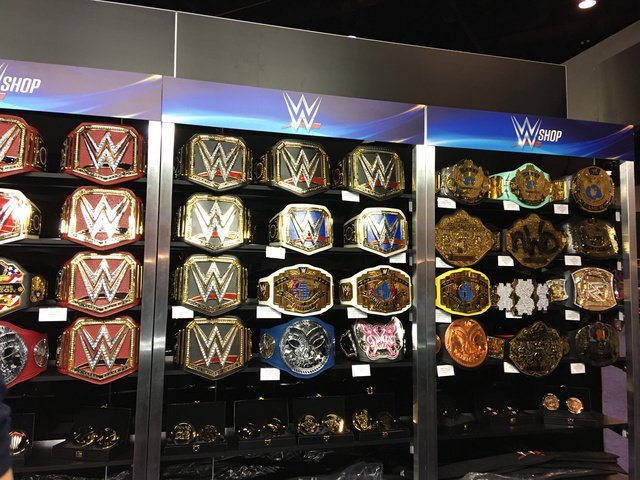 This article was inspired by a recent clip that I saw with JR saying wrestling belts are props and for him the replica belts that he owns are a waste of money looking back on them. Now I want to start by saying I have nothing but the utmost respect for JR. In my opinion he is the GOAT and has one of the best minds for the business but I respectfully disagree with his first statement and the second statement really depends on the fan whether or not buying replica titles are a waste of money to them.

I don’t fully disagree with JR that the titles are used as a prop to get a guy over in some instances but I don’t believe that is the only reason to give someone a title and I also don’t believe that they don’t have value of anything more than a prop. Certainly giving someone a title can help elevate a talent in the fans eyes but why does the title elevate the talent and it is not just because he has a gold belt, it is because of the history of that title and the men or women that held that title before you brought value to that title. Not just by being former champions but how they carried themselves as champion and the feuds that they had over those titles. If done correctly, a title reign should not only get the talent holding it over but that talent should make that title maintain or exceed its importance in the fans eyes so when they eventually lose it the person winning it means more because they beat you and won that title.

JR is not the only one that has said belts are just props, Vince Russo, Bruce Pritchard and Ryback have all made similar statements. This brings me to my other reason that talent are given titles and that is because they have earned it. The argument is always well you don’t actually win or beat anyone as the outcomes are predetermined and technically that is true but that doesn’t mean giving a talent that has truly worked hard and sacrificed a lot to earn that title doesn’t mean anything to him or her. It is a symbol of recognition that they promotion recognizes what you have done and feel that you earned the right to be a champion and worth the investment to represent the company in that capacity. You look at someone like Ric Flair, Harley Race, Bruno Sammartino, Eddie Guerrero, Shawn Michaels, Edge, Bret Hart and the list goes on and on, do you not think being World Champion meant something to them? It wasn’t just a prop to them. Mark Henry responded to Ryback’s comments, essentially saying Ryback is a bitter man and he disrespected him and everyone in the business by attempting to diminish their accomplishments. Jim Cornette responded to Bruce’s comments, that the title match should be the most important match on the card and you never should publicly acknowledge the prop aspect of the belt.

Winning a world title in professional wrestling is the equivalent of winning an Oscar as an actor, it is recognition that your performance in your field earned you that award. Steve Austin has said repeatedly that if you aren’t in this business to be world champion of whatever company you are in then you should get out because you don’t belong there. The point being that you should always strive to be the best in the business and that is often symbolized by being the world champ. Some people don’t get it, they don’t understand the respect that most wrestlers and fans have for a given title belt isn’t because of the physical belt, it is because of the history that surrounds it and the respect of the tradition of those that held it before and the nostalgia as well.

Here are some perfect examples, Shawn Michaels idolized Ric Flair and his boyhood dream was to be like his idol and be world champion. Shawn would eventually achieve that dream at Wrestlemania 12 and there was no question that meant something to him and it certainly wasn’t a prop to him. Shawn would ultimately be the one to retire Flair from WWE in ring competition 12 years later at Wrestlemania 24.

A recent example is Trevor Murdoch, a man that idolized and was trained by Harley Race, at NWA 73, he honored Harley by wearing matching ring attire and he achieved his boyhood dream of winning the NWA World Championship, a title that Harley is synonymous with and it meant the world to him and it was certainly not just a prop to him.

Shawn and Trevor are not the exception to the rule but any respectable wrestler feels the same way that to be a champion is recognition of their hard work and a connection to the past. So yes there are prop elements to the title belts but they should and do mean more to most wrestlers and fans.

As a collector of various collectibles myself, there are two main reasons:

1) Investment – with the intent to flip it for a profit

For me personally, I have a lot of passions so the pieces that I collect connect me to those things. I’m not a completionist or some one that buys everything that comes out, I’m very selective with the pieces that I procure. I know I’m never going to be a wrestler like most fans aren’t going to be one. Whether it is collecting wrestling action figures of their favorite wrestler or buying a replica title or perhaps buying a piece of wrestling memorabilia, it is a connection to the business that they love. For JR, he feels that his 2 or 3 wrestling belts that he owns are a waste of money but that is just his personal opinion and he made it a point not to criticize Conrad Thompson, who literally has an entire wall of either authentic or replica belts behind him. JR said I’m not criticizing you for your collection but for me it isn’t my thing.

My thing with collecting is this, I don’t criticize anyone for what they are collecting or what they spent on it, as long as you can afford to do it, you aren’t hurting anyone and it isn’t illegal, I have no problem with it. I’m not a big belt guy, I have a couple mini replicas and 2 full size belts and for me they were worth the money and make me happy every time I see them. It is a connection to the business that I love and although they are not authentic ring used belts it is especially cool watching a wrestling show and the champion walks out wearing the very belt that you literally have a few feet away.

A few years ago, 2K released a deluxe edition that was a Ric Flair tribute set that included a replica HOF ring and a authentic piece of one of Ric Flair’s iconic robes. Now Conrad Thompson is not only Flair’s son-in-law, he is also a die hard wrestling fan and collector of memorabilia. 2K went to Conrad looking to procure robes since obviously WWE knows Conrad would be the guy that could help 2K out.

As Conrad explains in the video above, he thought what 2K wanted to do was a very cool thing for the fans and like Conrad said it is a way for fans to get a piece of authentic Ric Flair memorabilia at a much more affordable price because most fans don’t have $30K lying around to buy one of Ric’s robes and wouldn’t even really know where to find a legitimate one anyway.

So to wrap this part up, fans collect often times to feel connected to something that they love or feel passionate about and whether seeing a title belt sitting in their man cave makes them feel some sense of happiness, as long as their bills are getting paid, then who is anyone else to judge what they spend their money on?