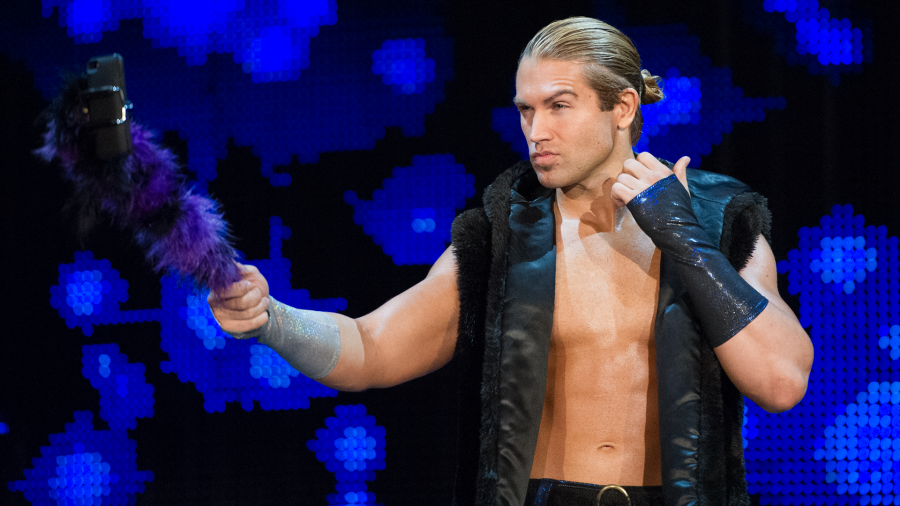 The first time I saw Tyler Breeze was when the WWE Network debuted and I finally started watching NXT and one of the first talents that I saw was a guy that came out with the confidence of a star and that was Tyler Breeze. The camera literally focused on his furry boots and panned up to show his furry vest and him holding a furry selfie stick and when you add in the music announcing “look at me, prince pretty is here”, this was a perfect narcist character. The gimmick reminded me of ROH’s Dalton Castle and the legendary Gorgeous George.

Before most people saw him on NXT, Matt Clement was trained by the Lance Storm, he was technically sound in the ring for sure because that was one thing Storm always was. Matt struggled in FCW the predecessor of NXT and was close to being released and was told point blank in 2013 you need to create a new character otherwise you are gone. Matt would end up creating Tyler Breeze and the rest was history. Matt was very well liked and respected backstage so everyone was pulling for him and he delivered with Tyler Breeze.

While other talents were getting called up to the main roster, Tyler remained in NXT delivering quality matches. He was handpicked by Triple H to be the man to face the legendary and future WWE HOFamer Jushin Thunder Liger in his one and only WWE/NXT match ever at NXT Takeover Brooklyn and they delivered a great match.

A few months later he would debut on the main roster and like a lot of NXT call ups would struggle due to bad creative and changing the character from what worked in NXT. Several talents have seen their success in the business greatly diminish during the transition. Tyler would struggle until he became paired with an unlikely tag partner, Fandango. Together, they instantly jelled and became a very entertaining tag team with backstage segments as the Fashion Police they’d investigate “crimes”. The best was the evidence board would be filled with inside jokes that only the people in the industry or hardcore fans would get like a “Where is Doc Hendrix?” note with a picture of him on the board and we all know that is the WWE HOFamer Michael P.S. Hayes.

Their success would quickly fade and Breeze would be the first to go back to NXT as both he and likely Triple H felt he could do more good there then he could jobbing on the main roster. Fandango would soon join him there and they would go on to win tag team gold for the first time.

Their run was short but it was a validation for both men as they were both underutilized and underappreciated on the main roster. Although Tyler provided entertainment on WWE TV, he really shined on WWE’s YouTube channel UpUpDownDown (UUDD), where he was truly able to be himself and the fans really got to see Matt Clement. He was witty, sarcastic and just plain funny on the programs especially when DaParty formed of Xavier Woods, Cesaro, Adam Cole and Tyler Breeze. The four of them would play games like Mario Party and Uno and every video is just as entertaining as the last.

With his WWE release, the question remains how long will he remain on the channel? My guess is not very long because it is very unlikely he’d still appear there if he signed with another promotion and it is likely either his partner in a wrestling school, Shawn Spears, will help bring him into AEW with him or fellow Canadian, Scott D’Amore, will bring him to Impact. Even on a recent episode of UUDD, they even openly teased it with Matt saying should this episode be called “Un-Over…we don’t know”. They even bantered about what his new name should be:

Cesaro: You should call yourself Ryler Cheese

Cole: You should call yourself Adam Coleman

Cesaro: Instead of Adam’s Boom you should say Bang

This type of banter will be greatly missed when Tyler is eventually forced to leave the show. He has already launched his own twitch and Youtube channel with Shawn Spears playing video games. Funny enough on a UUDD episode after his release, Tyler would win the LeftRightLeftRight Championship. Tyler would end up posting this gem of a picture on his Instagram, a call back to CM Punk winning the WWE Championship on his believed last night in the company shocking the world (of course he secretly re-signed prior to the match).

Personally, I really hope Triple H is able to bring him back like he did Samoa Joe because he is not only a great on screen character but he would be a great resource as a trainer or agent and of course UUDD greatly needs him too. No matter what, wherever Matt Clement goes he will  succeed if given the opportunity to do so. I look forward to seeing what the future holds for Prince Pretty.