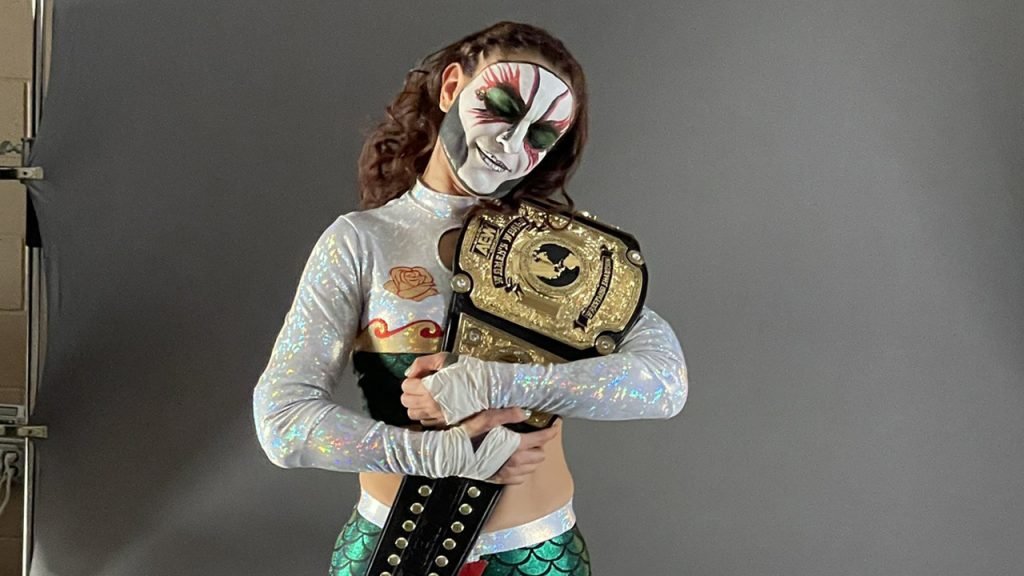 If I could describe Melissa Cervantes aka Thunder Rosa in one word it would be “perseverant”.  She has overcome so much to get to where she is now.

AEW Superstar Thunder Rosa defeated Dr. Britt Baker on March 16th to become the new AEW Women’s Champion.  She has solidified her name in the history books as the first Mexican-born Latina to hold a major title in professional wrestling. She also held the women’s championship in NWA prior to signing with All Elite Wrestling.

Why would I label her as perseverant? Ever since she was a child, she has persevered.  At the age of 17, she departed her beloved Tijuana Mexico along with her sister to relocate to the United States. Prior to beginning her professional wrestling career, she graduated with a degree from UC Berkely and became a social worker dedicating her life to helping children and teens who underwent traumatic experiences.  Her experience as a social worker is one of the many layers that makes up who the Thunder Rosa character is.

In 2014, her professional career began and she worked for numerous promotions such as the National Wrestling Alliance (NWA), Women of Wrestling (WOW), and Lucha Underground.  She made her debut in All Elite Wrestling in 2021 and has shined ever since.

Thunder Rosa is an advocate and a voice for women in professional wrestling. Alongside her husband, she founded Mission Pro Wrestling which is an all-female promotion in Texas, training and mentoring future Hall of Famers and showcasing to the world what equality and diversity truly look like in the wrestling ring.  She used her voice last month at Warrior Wrestling 19, putting a fan on blast who was shouting racist and disrespectful remarks towards her opponent Athena.  She made it perfectly clear that day that it is never okay to disrespect women wrestlers who push the limit and put their bodies on the line show after show.

What does this Championship win mean for the Latin community? Seeing Thunder Rosa holding the AEW Women’s Champion has a much deeper meaning and impact than what we see, it is not only the beginning of a new era but the opportunity to open a door for the Latin community. Throughout history, we have seen female wrestlers of Latin descent like Melina, Raquel, and Bayley shine and make history, but seeing someone like Rosa embracing her Mexican roots with all her being touches the hearts of all Latin wrestling fans. And I’m pretty sure there are a lot of girls right now who now believe that one day they can be Women’s Champions no matter where they come from or what language they speak. It is the first time that a Latin woman holds such an important title, and it becomes something more significant when it happens in the women’s history month, showing the world the Latin power and giving representation to all those who stand behind her and see her as an inspiration because that is what Thunder Rosa stands for right now.

We all have encountered a “Thunder Rosa” in our lives. My “Thunder Rosa” goes by Laura who entered my life when I served in the United States Navy.  Much like the women’s champion, she too left her home country (Nicaragua) for a better life and since then, she worked hard through the enlisted ranks to get to where she is at now as a Naval Officer being the example for not only Latina women in the military, but most importantly her daughter.

The Thunder Rosa Era has finally begun.  She is the example of the “American Dream” and the epitome of what Women’s Wrestling truly is. And she’s just getting started.