Honestly: The Sky’s The Limit For Hit Row 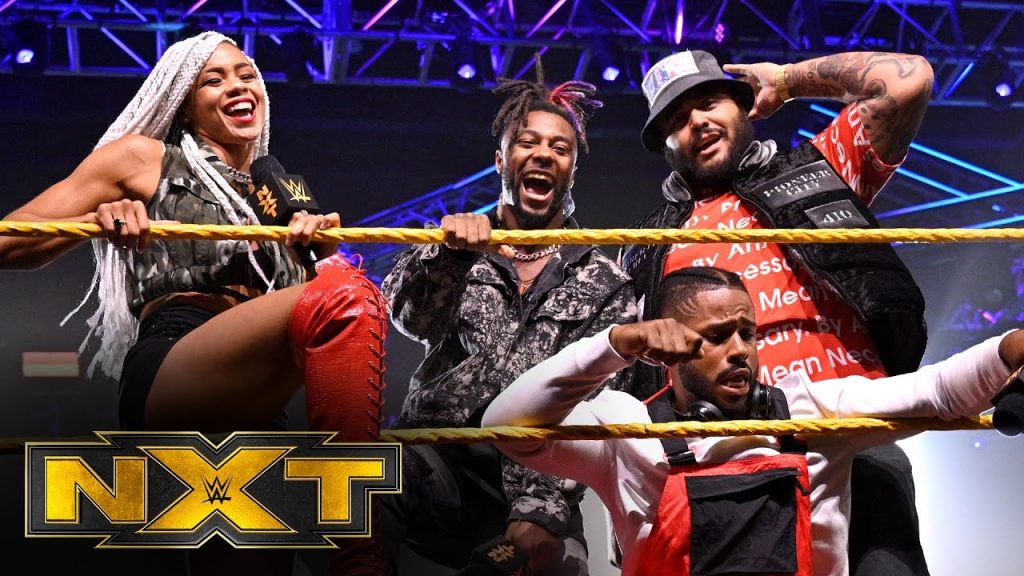 From the moment they burst onto our screens, Hit Row have caused a stir in the wrestling community. The four-piece group, led by Isaiah “Swerve,” Scott, are currently firmly ensconced at the top of the NXT midcard. However, I firmly believe this won’t be their permanent position in NXT or WWE as a whole. The group show considerable promise, both in ring and on the mic. Furthermore, they’re something modern and fresh in a company that sometimes fails to keep up with the times. That’s why I believe that the sky is truly the limit for Hit Row.

Let’s get the obvious out of the way. Hit Row look and sound amazing. It’s nice to see splashes of colour in NXT, and although their costumes might be a little gaudy, it’s better than the usual dark trunks or leather jackets. That’s a big thing that I, and many others like about the group. They own their gimmick to an extent that many other groups don’t.

I’ll admit, a big reason behind that is all the members of Hit Row can legitimately rap (although jury’s out on Swerve). It’s true that I’m someone who would rather listen to Johnny Cash than Jay-Z. But, I’ve looped “Now You Know,” more times than you’d think. Their “Championship Cypher,” had me impressed, and although viewership dropped in that segment, it was still nearly 800 000. This clearly shows that Hit Row are over with the fans and draw decent audiences, especially for a performance segment. The fact that they’ve got me legitimately interested in rap music for the first time in a while is even more impressive. If they can replicate this with other members of the WWE audience, NXT are onto a winner.

On Their Way To The Top

As of publication, we’ve seen three members of Hit Row wrestle. Swerve has won the NXT North American championship and looks like a solid high-flyer. Ashante “Thee,” Adonis has shown considerable skill, and I don’t think Wade Barrett is wrong to praise his dropkicks. Even though we’re yet to see B-FAB wrestle, her role as the main mouthpiece of the group ensures interest in her remains high.

In my opinion, the member who has shown the most promise is Top Dolla. The group’s powerhouse, his in-ring acting and moveset look unique on a show dominated by smaller men. His habit of slamming both members of an opposing tag-team looks the part and sets him apart from the crowd. I don’t know how well he would transfer over to the main roster, where larger powerhouses are the norm, however his charisma and the presentation of the group will serve Hit Row well in that scenario.

Whether it’s their modern gimmick or in ring potential, things are looking great  for this group. So, if you didn’t know, now you know. Hit Row have the potential to be a big part of NXT and WWE going forward.