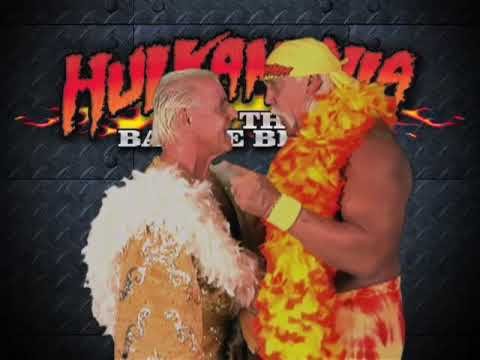 How could a tour that featured the two biggest wrestling stars of the 80s facing each other in the main event fail?  Well in this article I will discuss their history with each other, what led to the tour and give my opinions on why this failed. It is the tour that everyone involved wants you to forget that it ever happened. Much like Hogan’s match with Paul Wight in Memphis in 2007, it is a story in the chapter of Hogan’s career that exposed his drawing power was not what it used to be.

Between the two of them, Flair and Hogan have held world championships at least 28 times, the number may actually be higher because there is some dispute on some of Flair’s and Hogan’s reigns whether they count or not but at the minimum they have almost 30 officially recognized reigns between the NWA/WCW & WWE.

They are arguably the two biggest wrestling stars of the 80s and two of the biggest names in the history of the business. They are two of the rare performers, that have crossed over to pop culture that are known all over the world by wrestling fans and non-fans as well.

Long before there was the WWE vs AEW fanbases that argued with each other about Sports Entertainment vs Professional Wrestling, there was the arguments from the WWF and NWA fan bases about the same thing. As the WWF began to rise up as a pop culture phenomenon in the mid to late 80s using Hulk Hogan as the face of the company and Vince McMahon brought in the best performers from his competitors as he pursued to expand the reach of the WWF throughout the rest of the country and eventually the world. There was a contingent of fans that were opposed to this as they saw what the WWF was presenting wasn’t “real professional wrestling” in their opinion. These fans rallied behind the NWA and its champion, “Nature Boy” Ric Flair.

It was the dream match that fans all over the world wanted to see, Hogan vs Flair. It wasn’t just about these two men; it was about what they each represented, the clashing of the wrestling fandoms and cultures. This Us vs Them, sadly still exists to this day and I’ve written about this before, you don’t have to choose sides, you can watch both or just watch one, it doesn’t matter it is just opinion based and personal preference. Anyway, despite the fans wanting the match, the WWF and Jim Crockett Promotions (JCP) were never going to agree to holding a joint event to have this match at a joint event and neither wrestler was posed to jump ship to make this match happen either at that point. The WWF did make a number of attempts to get Flair to jump but he was loyal to the NWA.

Oddly enough, before Vincent K. McMahon, took over the promotion from his father and began invading other promoters’ territories, WWF vs NWA champion matches had taken place, but the matches would never have a definitive winner, because they would end in a double count out or some other type of draw scenario.