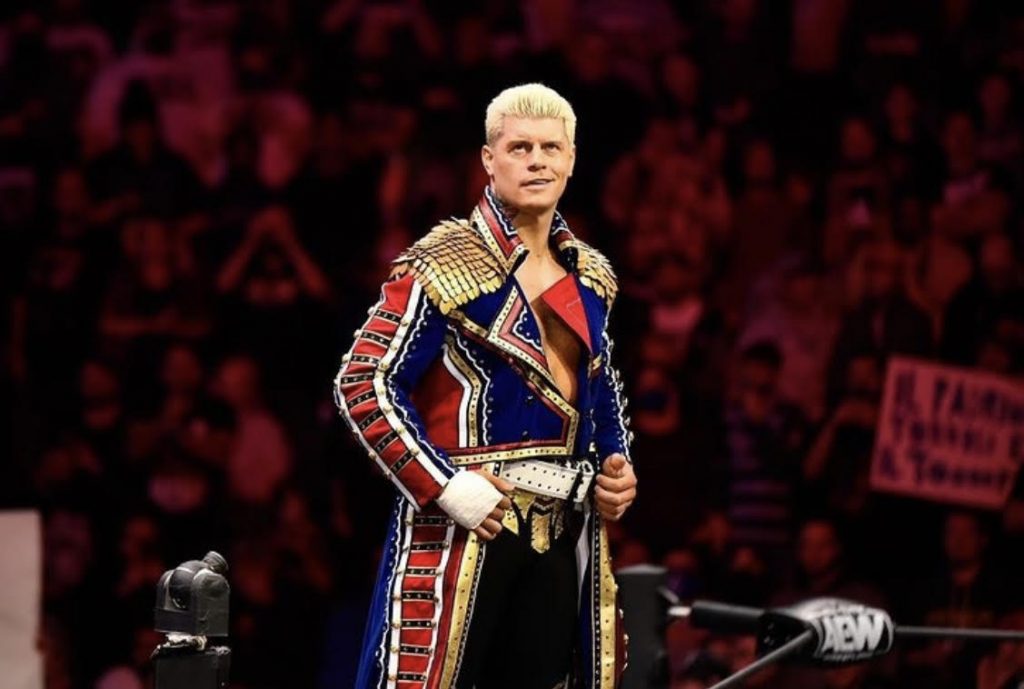 As we have just witnessed, the rumors were true, and Cody Rhodes has finally made his shocking return to WWE. Cody said repeatedly for years that he thought he was blackballed with WWE and the bridge was burned, but apparently time has fixed that bridge. As we at Wrestling Republic reported weeks ago, that Cody has been signed by WWE for a while now since we believe just before the Elimination Chamber. We never backpedaled on that stance while so many other outlets shifted to rumors of Cody not being signed by WWE and talks fizzling with WWE and possibly returning to AEW even claiming he may be running the newly acquired ROH, which were clearly proven to be false. While others jumped on the bandwagon of being signed just recently.

The long wait was completely worth it as Cody has made an impactful return on the grandest stage of them all at WrestleMania putting on a hell of a match with Seth Rollins. This was truly a Wrestlemania moment. Seth was the perfect opponent for Cody, since Triple H’s health has forced him into retirement, the next best dream opponent would be Seth. Seth having very strong ties to Triple H and Cody’s father, Dusty from his time in NXT, this match up made perfect sense. These two men delivered a Wrestlemania classic. Cody having the Wrestlemania return that was very similar to the Hardys when they returned was a truly special moment. This return also has another full circle irony as well, Cody’s last Wrestlemania was at Wrestlemania 32 in the same location at AT&T Stadium and Texas is also the birthplace of his legendary father and brother. This was an incredible return for as Corey Graves called him the prodigal son. Thankfully, WWE made the right move of allowing Cody to keep his same look, music and Nightmare moniker that he has established elsewhere and its tremendous that Cody picked up the win with a bionic elbow into the cross rhodes. No question this meant the world to Cody being home as he looked up to Heaven as his father, Dusty was surely looking down with pride in his son with a smile on his face.

A few months ago, I wrote an article about Cody’s career in wrestling and for his need to embrace the role of becoming a heel in AEW, and at no point when I wrote that article, did I even consider the possibility a few months later I would be writing about Cody making the unbelievable jump back to WWE, but here we are. Even only three months into 2022, professional wrestling has shown us to expect the unexpected and if these few months are any indication we are in for a wild and crazy ride this year. When news broke on the morning of February 15, 2022, that both Cody & Brandi Rhodes were leaving AEW, my first thought along with a lot of other fans were this is probably just an angle. Afterall, it has been public knowledge that he has been working on a handshake agreement with Tony Khan as the fact was even acknowledged on TV as well. However, as the day went on and more information started coming out about the situation, my personal 80/20 feeling that it was a work became 80/20 this is legit.

Once Cody’s resignation letter was posted and Tony Khan responded in kind on the official AEW twitter account, it started becoming crystal clear that this was very much not an angle. For those of you unaware, it is often frowned upon by the corporate world to use a corporate twitter account or official press releases to issue fake information. As we at Wrestling Republic reported, there were issues behind the scenes that made staying in AEW not a good situation for the Rhodes’. So, with the Rhodes’ leaving AEW, the following question, was where do they go now? The already shocking news became even bigger that they could be returning to WWE.

Cody Rhodes isn’t just the first AEW wrestler to jump to WWE, this is a founder of the promotion and a legitimate executive vice president. Almost immediately, there appeared to be an effort being made from some individuals inside AEW and some clearly biased individuals in the wrestling media trying to not only disparage Cody and Brandi Rhodes, but to downplay this being a big deal. Let me be perfectly clear this is absolutely a big deal for AEW’s public perception outside of the wrestling fan bubble. Any company that has two executives let alone founders leave is a bad thing, but to join a competitor that happens to be the industry leader, that gives the added perception this promotion has potential problems inside the organization. Keep in mind that Cody has been the face of the organization as the Turner Executives had him on both the Go-Big Show on TBS and the reality show, Rhodes To The Top with Brandi on TNT. The Turner Executives cannot be thrilled with this departure as it not only effects AEW programming but other shows as well.

Cody has often been the target of fan criticism during his time in AEW, saying it is all about his own ego and refusing to put other talent over. The perception has been he used creative control to put himself over, but it is becoming more and more clear the final say has always been Tony Khan’s on what happens in AEW. So, although Cody has been getting the heat from the fans, it may not be entirely justified. The smear campaign against Cody, didn’t just start now, as a few months ago, reports came out that Cody wasn’t helping talent unlike CM Punk that was helping talent. A rumor that was quickly shot down by talent and the same happened with Brandi as well. You may ask, well why make up lies and smear them? Well, my personal opinion is that it is an effort to not only downplay the significance of them jumping, but an attempt to diminish their value in the eyes of the fans.

Despite the smear attacks against him and his wife, by people that he likely considered friends at one point, Cody has consistently taken the high road here, as he has not publicly disparaged AEW or anyone in the company. When a fan said he would stand with Cody, and no longer support AEW, Cody responded to the fan, encouraging the fan not to abandon AEW:

That was an incredibly classy thing of Cody to do here, because he could have easily not responded to that fan or thanked the fan for turning on AEW, but instead he took the high road, unlike some of his former co-workers in AEW.

The Cody Rhodes that returns home to WWE is not the same Cody Rhodes that left the WWE almost 6-years ago. Cody felt he had no choice, but to leave WWE in 2016, when he was essentially told point blank that they didn’t think he could ever be a main-event player in the company. Cody has said over the years that his father, Dusty, told him to leave years earlier, but Cody didn’t want to. After being told he had reached his ceiling in the company, and he felt he was capable of so much more, he took the gamble on himself and requested his release in May 2016.