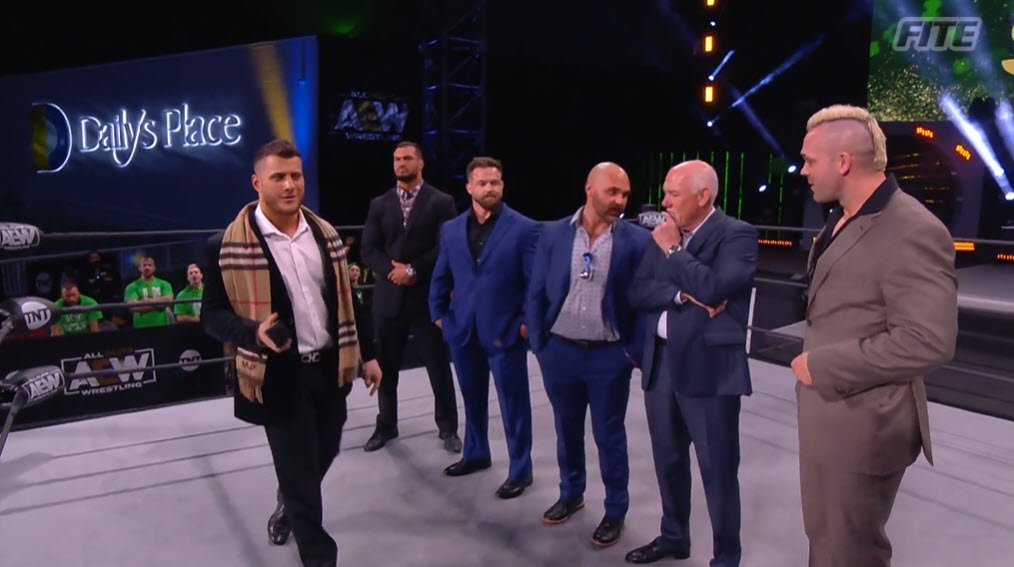 When MJF introduced the Pinnacle to the world, a lot of wrestling fans felt a surge of nostalgia. Sharp dressed heels with a vicious streak a mile wide? Made up of a charismatic leader, old-school tag-team and that one guy you want to see punched repeatedly? Comparisons to the Four Horsemen were being made as soon as FTR and Shawn Spears linked up with Tully Blanchard. But now that the group has a name, snazzy entrance theme and video, the parallels are even clearer. However, I think it’s important that we go beyond calling them “AEW’s Horsemen,” and consider their separate purpose.

Let’s get the disclaimer out of the way. I’m comparing the original incarnation of the Four Horsemen (Flair, Arn and Ole, Tully and JJ) to the current day Pinnacle (MJF, FTR, Wardlow, Shawn Spears and Tully Blanchard).

They’ve Got The Look

Now, comparisons to the Horsemen are logical. They literally have Tully Blanchard and JJ Dillion appearing to support them. As well as this, the groups have a similar makeup to the original Horsemen, with only Wardlow not having a 4HM equivalent.

However, the purposes of the two groups could not be more different. The Four Horsemen were established territory talents, brought together to dominate. The flashy, brash and confident stable provided a seemingly insurmountable challenge, only to be toppled by a beloved underdog. These men were already at the (excuse the pun) pinnacle of wrestling. The modern day Pinnacle isn’t quite there yet.

If Not Top Dogs, Then What?

In my opinion, the Pinnacle has three main purposes that are apparent. Firstly, establish MJF as one of, if not the top heel of AEW. There’s no doubt that the young sadistic rich kid will be a pillar of AEW’s future. Giving him a group to lead demonstrates the trust that Tony Khan and AEW Creative have placed in MJF. With Kenny Omega starting to slow down and allow his body to heal, a new top villain is required. The Pinnacle allow MJF to legitimise his “rarely wrestles,” gimmick whilst maintaining his presence on our screens.

The group similarly serves as a means to boost Wardlow’s profile. In a company where the majority of the big men are exceptional, MJF’s muscle is yet to differentiate himself from Cage, Hobbs et al. However, the Pinnacle should allow Wardlow more time in the spotlight, leading to developing character and storylines.

Finally, Shawn Spears is being revitalised by his association with the Pinnacle. I think I speak for the majority of fans when I say the Chairman gimmick didn’t set the world ablaze. As well as this, the unprotected chair shot to Cody Rhodes won AEW a lot of heat. By subtly reworking the gimmick and bringing Spears into the group, AEW can rehabilitate the Chairman. Therefore, it’s clear that the Pinnacle is a vehicle to get heels over, not babyfaces.

You might have noticed I haven’t mentioned FTR yet. That’s simply because the Pinnacle serves to underline their credentials as old-school brawlers, not elevate them unlike Wardlow or Spears.

Not the First, Won’t Be The Last

Finally, a note of caution. So many wrestling stables have been compared to the Horsemen. Evolution, Immortal and even the Hurt Business have had parallels drawn to Flair and his crew. Similarly, the New Day were compared to the Nation of Domination, Undisputed Era to DX. The point I’m making is that every stable will be compared to those that have gone before. Just because the Pinnacle look like the Horsemen doesn’t mean they’re a total rip-off. Time will tell how far this group are able to develop the gimmick and make their own thing.