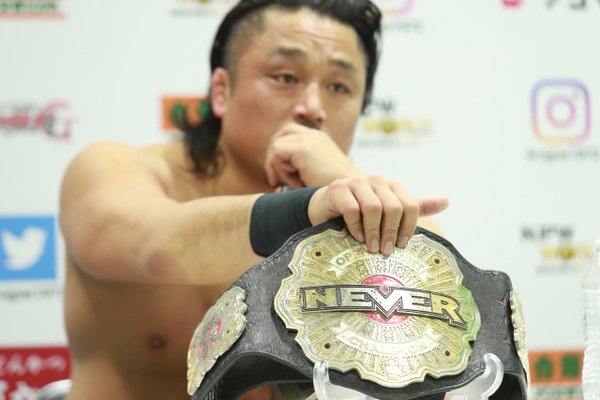 In My opinion, one of the greatest Championships in NJPW is the Never Openweight Championship. Simply because of the goals and ideals around it.
When I see the title and whoever wears it I immediately get the ideals behind what kind of champion that person is and will be. When I think of NJPW And Strong Style I put this title next to that name.

The number of hard-hitting matches in the Never Openweight division could go on for years possibly Decades. However When thinking about this title the first few names come to mind Katsuyori Shibata, Hirooki Goto, and of course the Stone Pitbull Tomohiro Ishii.  These Three men have shown not only should the division be taken seriously but the Strong Style behind their matches for the championship as well. When i think about this belt I immediately assume that the championship will not make the man but the other way around depending on that person and how they reign as Champion.

As the years passed and some championships took huge downhill turns and some people just didn’t fit right in certain pictures however the Never Openweight Championship didn’t have a fall in any of the periods of New Japan from Kota Ibushi and Will Ospreays war at WrestleKingdom 13 all the way to this year at WrestleKingdom 15 in one of the Matches I feel like stealing the show that being Shingo Takagi vs Jeff Cobb this match was a quick but hard-hitting match that represents what this title is all about. Do I feel like this title has lost prestige? No. Because while other titles are being held but ones who don’t deserve them the ones who win this championship are destined to put their names in the history books for a Reason and I feel the sole reason is this Championship. This Title shows that New Japan is exactly what they say they are and that’s Strong Style and one of the Hardest hitting Companies. As for the future of the championship i see great things for it no matter whos hands are on it if its a Dragon or a Switchblade this title will Never Change!