Honestly: Shingo Was The Right Choice To Win At Dominion 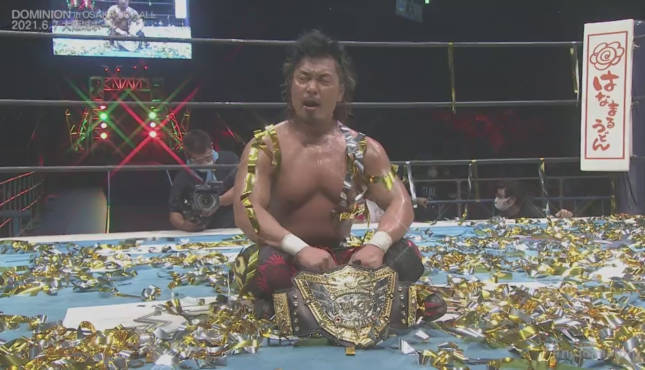 When Will Ospreay vacated the IWGP World Heavyweight Championship, I certainly expected Kazuchika Okada to win the title. It all made sense in my head. Toyko is hosting the Olympic Games, Okada participated in the torch relay, and it would have made sense to put the belt on him this summer. Having the “ace,” of the company as your top champion at a time when the eyes of the world are on Japan is logical. However, New Japan decided to give Shingo Takagi the belt, with the Dragon pinning the Rainmaker at Dominion. Despite my initial scepticism, I’ve come round to the idea of a Takagi title run- here are my reasons why:

Stability and new ideas in the main event.

Following Wrestle Kingdom, NJPW seemed to be building Kota Ibushi, Ospreay, Okada and Takagi as the pillars of the title scene. However, a serious neck injury to Ospreay and two slipped disks for Okada means that these pillars have been undermined. Shingo is portrayed as a capable wrestler and worker. A lengthy title reign by the Dragon makes sense in kayfabe and allows Okada to take time off to heal.

It also allows NJPW to take the main event scene in a new direction. If Okada had won, we would likely get the familiar storylines of CHAOS vs a heel faction. I feel that a new champion and a new character in the title scene allows New Japan to explore newer storylines, instead of re-treading the same path. Shingo’s first title defence will be against Kota Ibushi, but it’s what might come next that intrigues me the most.

A new way of looking at LIJ

LIJ has always been a popular faction- there’s no denying it. However, I have always felt that LIJ was the “Tetsuya Naito Show,” with the others as supporting roles. Much how Nakamura and Okada dominated CHAOS, the focus has always been on Naito’s growth from beloved underdog to established main eventer. I’ve enjoyed Naito’s time at the top of LIJ, but the time has come for a new focus. Shingo as champion represents a golden opportunity in that regard. As well, Shingo has dropped hints that he will face Naito later down the line. This would allow writers to explore the idea of dissension between the LIJ brotherhood in a new way. Furthermore, LIJ have been out of the spotlight due to Hiromu Takahashi’s injured pectoral muscle, meaning the emphasis on Shingo can only be a positive.

Ultimately, Shingo Takagi at the top of NJPW is a necessary infusion of fresh blood. Due to injuries and the pandemic, New Japan needs to steady the ship. A lengthy title reign from a character who has been shown to be one of the best provides that. The Dragon’s tenure would also allow New Japan to reintroduce LIJ into the main storylines in a new way. Therefore, despite my initial scepticism, Shingo Takagi was the right choice to win the championship at Dominion.