Honestly: Seth Rollins Should Win MITB And Fail To Cash In On Cody Rhodes At WrestleMania 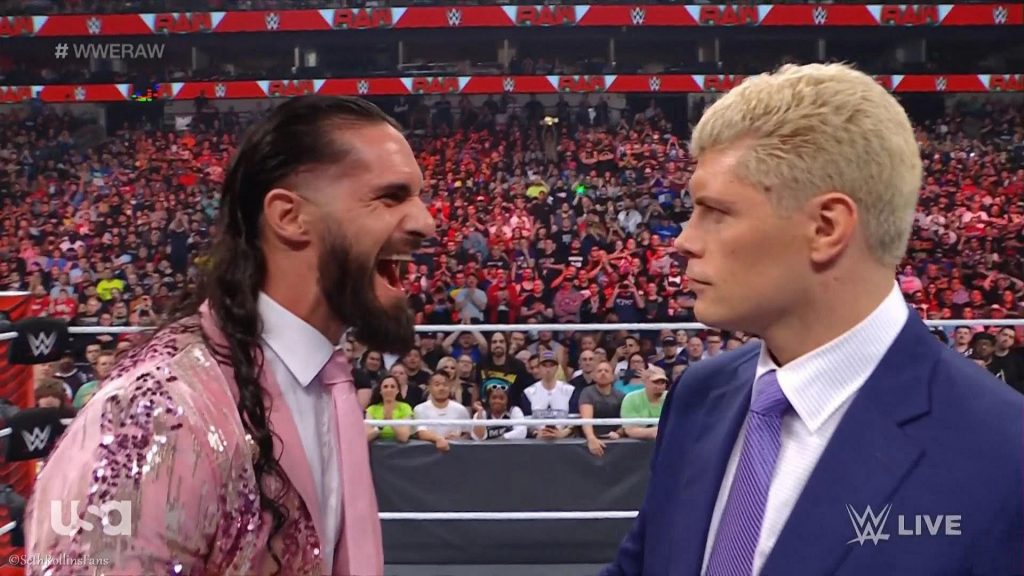 The Rollins vs Rhodes Saga So Far:

The chemistry that Cody and Seth have together is not something that can be manufactured or taught, it is something that you really cannot define, but when these two future HOFamers get together they create magic together and as a fan you can see and fell that you are watching something special.

From the very beginning of their feud, before Cody was ever revealed as Seth’s WrestleMania mystery opponent, Seth was building a foundation single handedly for very likely the feud of the year in the business. Although many fans speculated that Cody would be that mystery opponent, there were those that wouldn’t believe it until he actually showed up and there were those that were afraid WWE wouldn’t allow him to be the American Nightmare. Well, when the prodigal son actually did return at WrestleMania, the world was pleasantly surprised that he was truly the American Nightmare, completely unchanged from his indie and AEW runs. These men not only lived up to the hype that the fans had in their minds for this match but exceeded it and the fans wanted more after this WrestleMania classic match.

The hype for the Backlash rematch, continued to build the hype with the fans, now with both parties engaged in the story, it created a MUST SEE rematch situation. Again, these two men created yet another classic that some fans have even said was better than their WM match. With Cody winning both of those matches, Seth became more and more unhinged and desperate to get revenge on Cody. This of course would lead to what was believed to be the final match in this trilogy, that again has been so well put together that in my opinion has been the feud of the year so far.

This visual of Cody entering the cell with a legit torn pec and putting on one of if not the gutsiest performances ever. Seth and Cody put on such an absolute classic that could arguably be the frontrunner for the MOTY not only in WWE, but in all of wrestling. As I wrote previously, this was an unbelievable performance from both men and was a perfect finale for this feud.

However, the next night on Raw, with Cody addressing the crowd and saying he is done with Seth Rollins after sweeping him 3-0 in their trilogy of matches. Cody began hinting about competing in the MITB Ladder match, which I was not entirely sure why they would hint at that considering there is no way he’d be healed by then to even compete in that match in a few weeks. This of course brought Seth out who said he still hated Cody, but he respected him and shook his hand. Then in typical heel fashion when Cody was waving goodbye to the fans on the ramp attacked Cody with the sledgehammer.

The sledgehammer is directly tied to a mentor of both men, Triple H, which has been hinted at before in this feud as it played a prominent role in their HIAC match. I would assume this attack on Raw as done for two reasons:

2) To eliminate any possibility that Cody could be in the MITB Ladder match that he was hinting at in the promo.

Prior to his torn pec, Cody was prominently featured in the Money in the Bank promo, and many fans, me included, presumed he was the likely frontrunner to win the ladder match and would likely successfully cash in to finally bring the WWE Championship to the Rhodes Family and achieve what neither his legendary father and brother were able to accomplish.

Now with Cody out of the picture for quite a while for 5-9 months, the question on who will win the MITB ladder match has become a mystery. Considering Seth has now taken over as the prominent wrestler featured on the MITB poster and based on the potential options WWE has and how Seth has been booked and for long term storytelling, I think Seth is the most logical choice to win it.

After qualifying for the match in a yet another classic match, with another future HOFamer, AJ Styles. These men absolutely tore the house down in one of the best free TV matches of the year and certainly the best Raw match in a very, very long time.

Although Seth was only the first to qualify for the match at the time of me writing this article, I strongly believe he is the frontrunner and will win the MITB ladder match especially from a long-term storytelling perspective it will make the most sense to me with the biggest possible payoff if it plays out like I’m about to layout.

Seth has been Mr. MITB before and had arguably the greatest cash in of all time at a WM. Seth has already said he wants to repeat his performance from the last time. This is when the long-term storytelling all began to make sense to me on where I think or hope WWE is going with this whole thing. Having Seth be the one to attack Cody yet again after everyone thought their feud was over immediately sets them up to continue the rivalry when Cody returns. Also, having Seth essentially take Cody’s presumed spot after Cody “ruined” Seth’s WM moment this year is just tremendous in their game of one-upmanship.

Seth has continued to cling to the sledgehammer and taunt Cody in his promos saying his MITB win will be dedicated to him. I don’t expect Cody to cost Seth the MITB as it wouldn’t make sense to do that and have to wait 5-9 months for Cody to return to have the match. Having Seth win it and continue to gloat and brag and throw digs at Cody is the most logical choice because we know we are getting at least one more match between these two.

The original estimate that was making the rounds for Cody’s return was 5-months, so that would be in the November, but I don’t envision a Survivor Series return. I think the logical choice is a surprise return at the Royal Rumble. It would not shock me if WWE purposely said the longer return window to possibly throw fans off so they wouldn’t expect a Rumble return.

I think a Cody rumble return, would be an incredibly moment for Cody and the fans. They could either have Cody return as a later surprise return entry in the rumble like Edge in the twenties or possibly even number 30 like when Cena returned from injury. However, there is also the option, and it would very much fit the American Nightmare character especially after his performance at HIAC, have him run the ironman entering number 1 and win the whole thing.

The other potential option would be page out of his mentor/role model, Triple H’s playbook, having Cody making a return perhaps in MSG weeks before the Rumble. Triple H did this in 2002 returning from a serious injury at MSG announcing his intention to win the Rumble and the Undisputed WWE Championship at WrestleMania. Cody could do this same thing especially considering how he has modeled himself after Hunter and how WWE now views him as a major star since his return. So, Cody getting his own ”Beautiful Day” hype video for a return is certain possible.

Personally, I would love to see him a surprise entry, enter at number 1 and winning the whole thing and main event WM for the WWE Championship. It is the perfect story that he was derailed in his chase for the one title that has alluded himself and his family for years.

Cody can pull double duty here feuding with the reigning WWE Champ, whether it is the tribal chief or possibly someone like Drew McIntyre, plus Seth could be taunting both the champ and Cody that he is going to cash in and repeat his WM heist. This adds suspense into the match for three individuals all with varying degrees of history with each other.

Roman is likely facing the Rock at Mania, so he will likely be dropping the title to possibly Drew at the UK PPV. If it is Roman, he obviously has significant history with Seth and minimal interaction with Cody during Roman’s Shield days and Cody’s Stardust phase. Roman was the victim of his WM heist as well. In the case of Drew, him and Cody, both reinvented themselves after leaving WWE and return bigger stars than when they left. So, you have the mutual respect between them and the thorn in both their sides would be Seth.

Now, how I would play this out after a grueling match between Cody and the WWE Champ, you have Seth trying to recreate his WM heist.

However, this heist isn’t going off like the last time as both men were expecting Seth this time. This now triple threat match will certainly deliver and if is crucial for Seth to be the man to pin Seth to become the new WWE Champ and fulfill his family’s destiny. Again, ruining another WM moment for Seth and getting his revenge for everything that Seth has done to him. This then opens the door for Cody to either continue feuding with Seth and/or the former WWE Champ, who will be pissed at Seth for costing him and at Cody for taking his title without being pinned.

WWE will have multiple options to run with here as Cody takes his place as not only the WWE Champion, but the face of the promotion. Cody will likely bring back the iconic winged eagle title as well and this all could be truly special moments for Cody’s career and for wrestling fans if properly executed.