Honestly: Sasha and Naomi Did Not Let Me Down 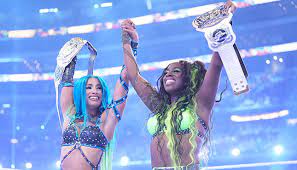 For the past couple of weeks, there has been discord over Sasha Banks and Naomi walking out on WWE over creative issues. WWE’s handling of the matter from a public relations standpoint has rubbed some fans and talent the wrong way.  During last week’s episode of Smackdown, Michael Cole insinuated that Sasha and Naomi let everyone down by walking out.

Michael Cole cannot speak for me because I was not let down.

Where was this energy by the company when Charlotte Flair and Becky Lynch were being unprofessional on LIVE TELEVISION? Where was the official WWE statement then? Every three months we have to re-visit the issue that everybody likes to sweep under the rug which is Women of color in the wrestling industry cannot have anything nice.

You may be reading this and rolling your eyes at this point.  You may be thinking to yourself, “Savannah, this is not a racial issue”, when in actuality, this story has been writing itself for quite a while.  Women of color in general, are labeled as “aggressive” when it comes to standing up for themselves, which seems to be the case in Sasha and Naomi’s situation.  What I have noticed in both the Internet Wrestling Community and from actual talent in the business, it is dead silence on arrival when it comes to defending Women of color in the wrestling business, whether they or talent or they are content creators.  These are the same individuals who spent the last couple of weeks glorifying the late Kevin Samuels who made a living putting down women in a derogatory manner.  So where is the love?

Aside from this being an attack on women of color, this also raises concerns from a mental health standpoint.  Sasha and Naomi did what was best for them because they felt disrespected as tag team champions.  Please do not sit here while reading this and pretend that you would not quit your job because of the toxic environment.