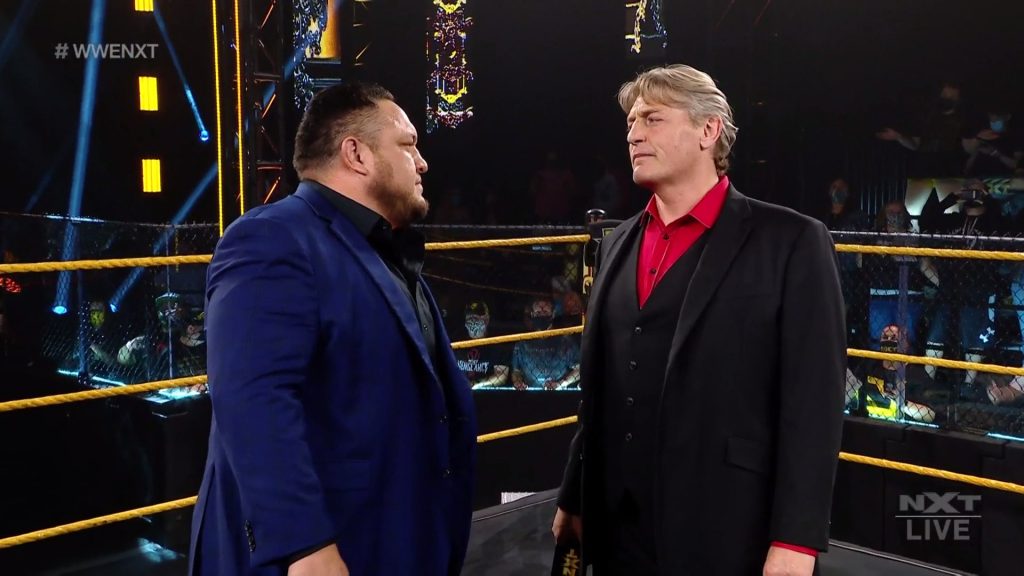 As we saw this week; the reports involving Samoa Joe returning to NXT after being released from the WWE came into fruition as he joined William Regal in a non-wrestling role. Samoa Joe brings to the table many things besides being an amazing in-ring talent as he has demonstrated how good he can be on the mic throughout rivalries and even as a commentator.

If Samoa Joe is as compelling on the mic in NXT as he has been on the main roster then even his on-screen presence will be felt because his main role is to maintain order within the NXT roster one way or another.

The conditions for Joe’s new role are simple: he cannot be a competitor and can’t lay a hand on anyone unless provoked. The conditions stated by General Manager William Regal sound simple enough until we take a moment to reflect on who Joe is as a character as he is known for picking fights with pretty much anyone.

NXT has such an interesting roster with people like Pete Dune, Adam Cole, and Karion Kross to say the least as each one could easily pick up a brawl with Joe when we least expect it, this will make each week an interesting watch as we will see the lengths Joe will go through if provoked by anyone.

I am intrigued by the sense of unpredictability that we as fans will have each week as things possibly escalate between Joe and much of the roster talent, this will make for entertaining programs as Joe’s patience could be tested until he goes off the rails. We already got hints that within the coming weeks there will be heat between Joe and Karrion Kross and literally 20 minutes into the show Adam Cole got choked.

What makes me happy about Joe’s new role is that he doesn’t need to be cleared by the company as he suffered throughout the main roster from a number of injuries, this means he can be part of stories without much worries of risking his body.

If NXT has shown us something is that they can write compelling stories with the talent they acquire and Joe fits perfectly as he has a history with the brand. Only time will tell if Joe’s role continues to evolve but what can be said is that we are in for a ride and I am excited about it.