Honestly: Rollins/Rhodes & MJF Delivered On The Mic This Week 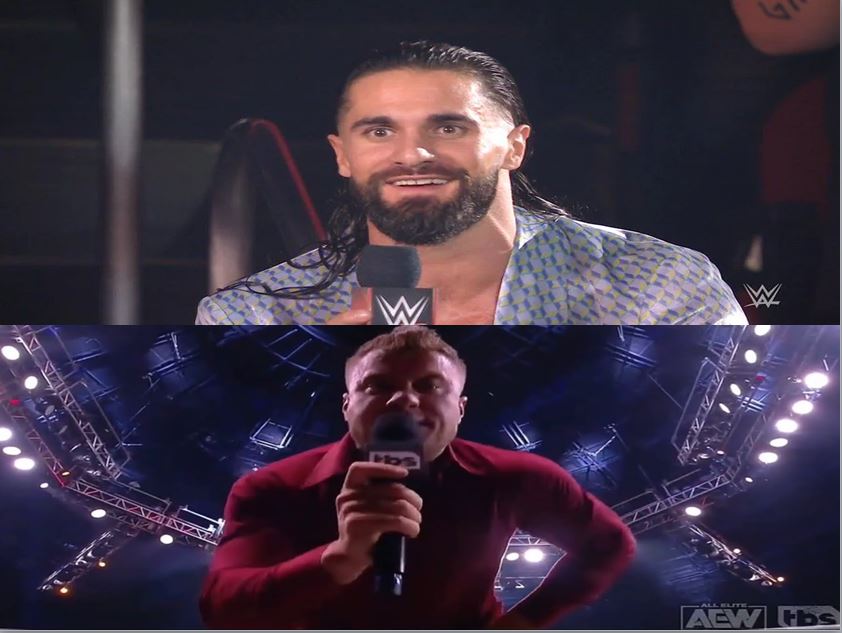 This week both WWE and AEW delivered with two fantastic promos that for me were the absolute highlights of Raw and Dynamite respectively. The reason both of these promos worked so well is that they had one major thing in common they contained elements of realism in them or at least gave the impression that it was a shoot especially MJF.

It is incredibly difficult for any feud in this day and age in wrestling to keep fans invested in a rivalry, because people seem to have shorter attention spans. However, Seth Rollins and Cody Rhodes, have had perfect chemistry together and have been able to maintain the fans interest. From Seth essentially building a feud single handedly in the buildup to WrestleMania when Cody was his mystery opponent to their combined efforts in hyping their rematch at Backlash. In that ring these men bring the absolute best out of each other.

Both men have strong ties to Triple H and Dusty Rhodes, so there is that strong history there. In my opinion, their match at Backlash, did something that not many feuds are able to do and that is deliver a match that may have even been better than the original. It was kind of obvious after their absolute WrestleMania classic that this feud was likely going to turn into a trilogy of matches.

With Cody Rhodes up two to nothing against Seth Rollins, the feud keeps getting hotter and hotter. See the current Seth Rollins character is like a Batman villain, in that he goes more and more crazy the more times Cody beats him. Seth has turned the feud personal as he previously called Cody and his father, Dusty, delusional.

This past week on Raw, Seth turned it further up the notch when he took digs at Cody leaving WWE six years ago and implied that Cody and the other members of the Elite tried to takedown the WWE kingdom that he was building. Referencing Cody destroying the Triple H throne in AEW and telling Cody essentially you cannot destroy the throne and comeback here and claim it as Seth views it as his. AEW was never mentioned by name, but that element of realism really delivered. As I have said before, realism helps connect with an audience and gets them more invested in the story.

Most fans knew exactly what Seth was referencing and those that didn’t could easily Google it. It was only a matter of time before Seth took digs at Cody’s AEW past and I give them a lot of credit holding it off until the last match for maximum impact in the buildup to their Hell in a Cell match.

This match should be the main event of the show, because there is no bigger match on the card and this feud in my opinion is the most compelling rivalry going in the business today. This is a feud along with MJF/CM Punk that have legitimate claims to feud of the year for 2022. These men will deliver an absolute classic inside the Cell that may equal or exceed the masterpiece of the original with HBK and the Undertaker.

The MJF story maybe the most interesting story in wrestling right now and it all centers around his potential free agency that isn’t even happening until January 1, 2024, assuming AEW can’t re-sign him. Last weekend, myself and Coby Galenzoski, posted a piece that was in the works for quite a while detailing our argument that MJF was probably going to WWE in 2024.

There is this constant debate whether this is all a work or a shoot, in my opinion as of right now this is a little bit of both. What is real in my opinion there are issues between MJF and Tony Khan stemming around MJF getting respect and MJF feeling he isn’t being paid what he is truly worth.

After a relatively quick squash match to Wardlow at DON, it was speculated that MJF would be off of AEW TV for a while or possibly even gone for good as AEW may be willing to release him early.

Those rumors were apparently false when MJF appeared on Dynamite this week and delivered a pipebomb like only he can. MJF is the best mic man in the business today and in my opinion is the only man that could be compared to the GOAT Rowdy Roddy Piper. Now after seeing this promo, it seems pretty clear that this is a shoot that has been turned into a work.

MJF poured his heart out in this promo ripping on the fans, for thinking they know what’s going on, to the boys in the back that he made clear he is more over than and he doesn’t have to do insane spots to get noticed like them and finally to taking shots at Tony Khan spending all his money on ex-WWE guys and not showing him respect.

MJF taking aim at the fans and Tony not appreciating his contributions to AEW was pure and genuine. MJF saying the boys in the back only care about star ratings, which seemed like a clear shot at Dave Meltzer’s star ratings and the talent that Meltzer supports and promotes.

Those feelings expressed by MJF were probably strongly based on his actual feelings especially with reports claiming he is paid significantly less than a lot of talents. There have also been reports that MJF and the rest of the locker room aren’t on the best of terms because of his public statements that he has no problem jumping to WWE in 2024.

You know it’s a work, because there is no way that AEW wouldn’t have cut his promo off sooner if it was real. So, there are only two possible reasons to let this promo take place in my opinion:

2) He has or will be re-signing with AEW

As Coby and I said in our piece, a lot of things can happen between now and January 1, 2024, and unless something dramatically changes, he will jump to WWE especially if he is given the Cody Rhodes treatment and he is allowed to be himself.

I’m not exactly sure what the payoff of this pipebomb promo is supposed to be since Tony has repeatedly said he doesn’t want an onscreen role like Eric Bischoff and Vince McMahon. MJF demanding his release on AEW TV certainly makes for compelling TV, but we expect nothing less from an MJF promo. This is a storyline that has the potential to raise MJF’s stock no matter whether he stays with AEW or goes to WWE.

Will this lead to a loser leaves AEW match between MJF and someone, perhaps with MJF putting up his career for a title shot? Someone representing Tony and the AEW locker room, that is certainly an option that they could run with. Having MJF win in this situation would certainly be shocking if he secretly re-signed much like Punk did when he beat Cena for the WWE title when Punk’s contract was believed to be ending and Punk secretly signed a new deal.

Realism is the key you want the audience to not know what’s real and leaves them guessing on what is going on. MJF is the master of blurring the lines and he is creating a must see product just by the story he is telling on the mic.

This promo was compelling because it was drenched in realism or at least what we as fans perceive as real based on reports and rumors. At the end of the day, just take a seat and enjoy the ride and let’s see where MJF takes us because he is the only person that knows the true answers of what is real and what is a work in his promos, but either way it is entertaining and compelling.

MJF is without a doubt the best most compelling wrestler on the mic and this promo is yet another reminder this man is GOLD for any company he works for. Removing MJF from the active roster page, unfollowing MJF on social media and closing his section of the AEW Shop is a nice touch for realism, but it is shortsighted losing out on the MJF merchandise sales during all this buzz.

2022 has been a wild year in wrestling unlike any other and with a promo like this it is just going to keep getting crazier.